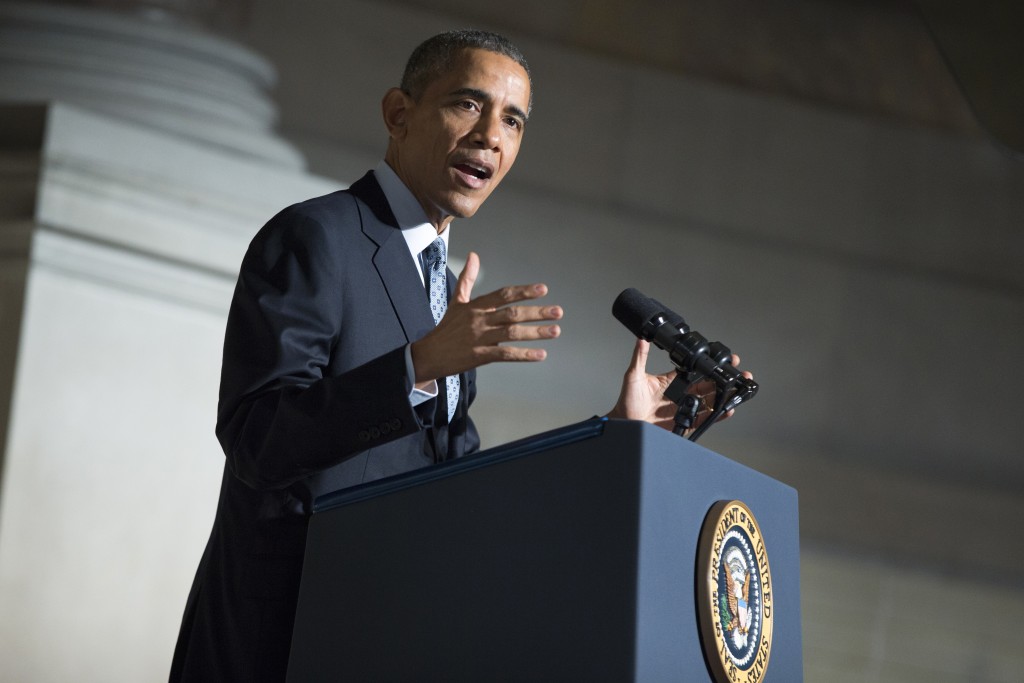 President Barack Obama described immigration on Tuesday as the nation’s oldest tradition and part of what makes the country exceptional, as he sought to draw a contrast between those who want to seal the borders and those seeking to escape hardships and persecution.

“We can never say it often or loudly enough: Immigrants and refugees revitalize and renew America,” Obama said.

Obama is seeking this week to reassure the public about his strategy for stopping the Islamic State group, while also emphasizing that the United States is a welcoming country that promotes religious tolerance.

Obama implicitly drew a contrast with GOP candidate Donald Trump, who has campaigned on a plan to wall off the Mexican border and recently called for a temporary ban on Muslims entering the United States. Some members of Congress have voiced worries that allowing more Syrian refugees into the country will make the nation more susceptible to a terror attack.

Obama spoke at the National Archives Museum, where immigrants from Iraq, Ethiopia, Uganda and 22 other nations were sworn in as U.S. citizens. He spoke from a lectern placed in front of the display of the Constitution, and said the nation’s first immigrants were the pilgrims and that eight signers of the Declaration of Independence were immigrants.

Obama described various ways that immigrants and refugees contribute to the fabric of America, saying immigrants are more likely to create jobs by starting their own businesses. He said many of the Fortune 500 companies were started by immigrants or the children of immigrants.

“Immigrants are the teachers who inspire our children and they’re the doctors who keep us healthy,” Obama said, noting that many also serve in the military, “often risking their lives for an America that isn’t even their own yet.”

Obama went on to say that immigration was at the core of the American identity. “In the Muslim immigrant today, we see the Catholic immigrant of a century ago,” he said. “In the Syrian refugee of today, we should see the Jewish refugee of World War II.”

Obama also said the United States has often not lived up to its values as a welcoming nation. He recited the history of slavery and treatment of immigrants from Ireland, China and elsewhere as examples.