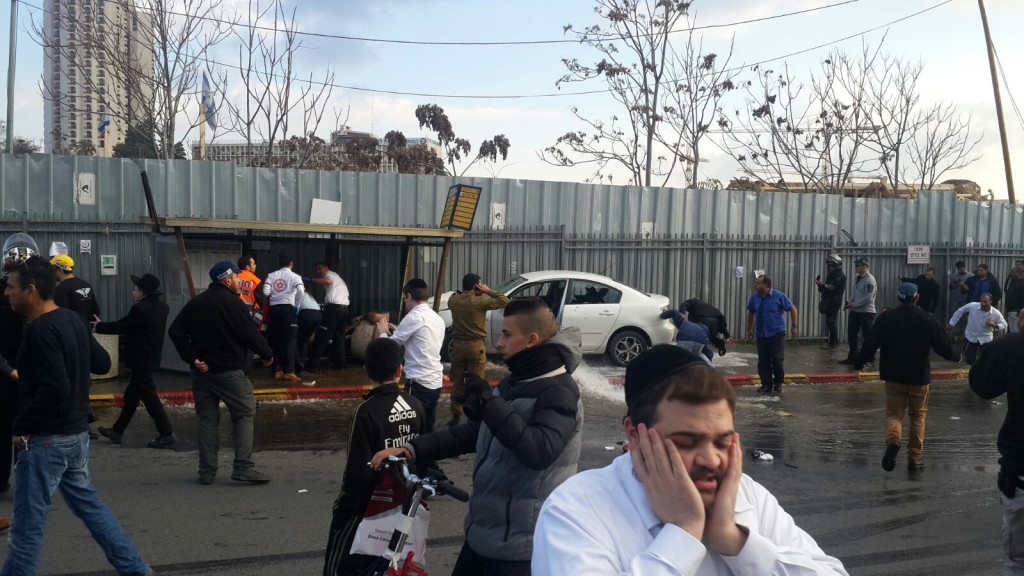 As a resident of Yerushalayim, Abd al-Muhsan Hasuna, the Arab terrorist from Beit Hanina who, on Monday afternoon, rammed into Israelis at a bus stop near the city’s entrance, had free access to all areas of the city. Controlling the movement of terrorists from Palestinian neighborhoods of the city under such circumstances is next to impossible – so Israelis are going to have to get used to the idea of living with terror, Public Security Minister Gilad Erdan said Monday shortly after the attack.

“I do not see an end to this wave of terror,” Erdan said in an interview with Channel Two. “We are in the midst of a fierce battle with an enemy that is not prepared to accept our existence in the Land of Israel. We have been the prey of this enemy over and over, and now we are facing this ‘stabbing intifada.’”

Prime Minister Binyamin Netanyahu ordered an immediate upgrade in defenses at bus stops in Yerushalayim in the wake of Monday’s car-ramming attack. Fourteen people were injured in that attack, including a 15-month-old infant.

The security beef-up will include setting up defensive perimeters in front of bus stops that will be strong enough to prevent a vehicle from driving into a crowd, as Hasuna did on Monday afternoon. The perimeters, in use at bus stops in Yehudah and Shomron, have proven effective in preventing car-ramming attacks. Hasuna, a 20-year old from the Beit Hanina neighborhood, was shot and killed by security personnel after the attack.

The decision to upgrade security at the bus stops was taken in a meeting between Prime Minister Binyamin Netanyahu and top aides Monday afternoon after the attack. The upgrade will take about a month, the Prime Minister said. According to Yerushalayim Mayor Nir Barkat, the project will cost about 2 million shekels.

Monday’s attack comes a day after Transportation Minister Yisrael Katz announced that some 300 private-sector security officers would guard bus stops around Yerushalayim. The officers, said Katz, will be an important element in the prevention of terror attacks. “Proper security work by trained personnel can do a great deal minimize the threat from terrorism,” Katz said at the Yerushalayim Central Bus Station Sunday as he inaugurated the program. “A civilian security corps that can concentrate solely on bus safety will go a long way to increasing the confidence of passengers and citizens in general.”

The idea for the corps was hatched last month, after several attacks by Arab terrorists at bus stops in Yerushalayim. In recent weeks police have launched a campaign urging people to be more vigilant and report any suspicious activity they observe – and Jerusalemites, especially those waiting for buses, have been very responsive, inundating police with reports that need to be followed up.

Under the program, some 300 security officers will be on duty in the mornings, and during afternoon and evening rush hours, keeping an eye out for suspicious objects, people, behavior, or anything else that needs to be investigated.