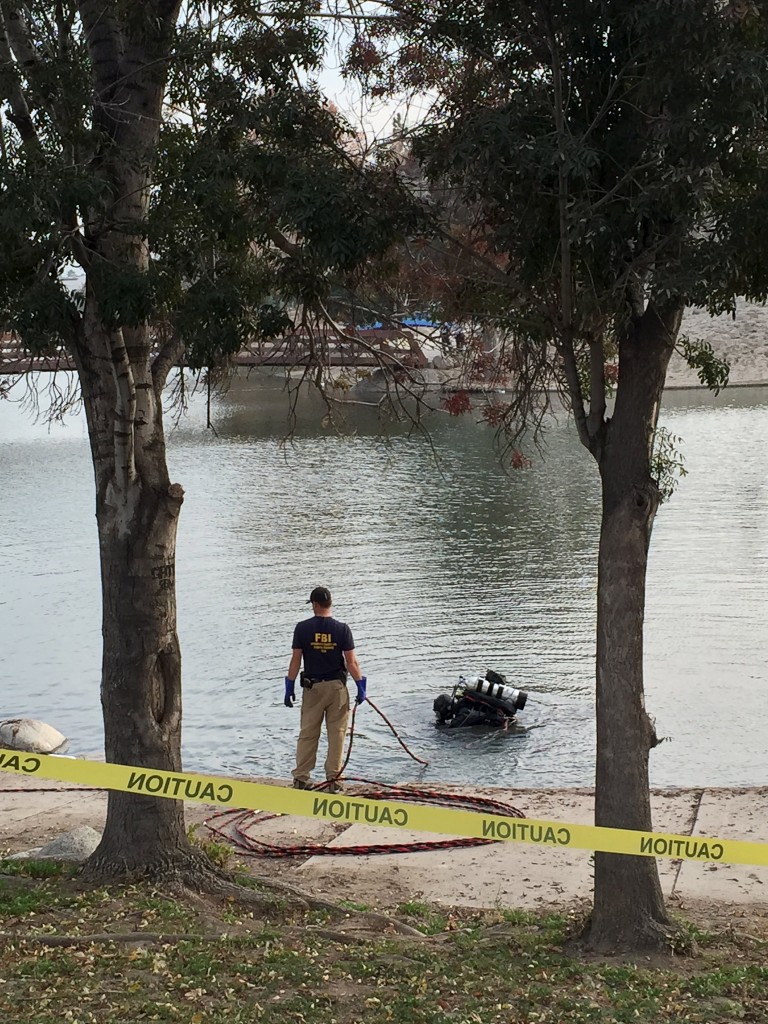 A week-old investigation into the shooting rampage that left 14 people dead at a party in Southern California turned on Thursday to a small lake near the scene of the massacre, where divers searched for evidence.

The FBI also revealed that investigators were looking into any connections there may have been between one of the two killers in San Bernardino last week and four men arrested in 2012 in a separate federal terrorism case brought in nearby Riverside, California.

Thursday’s underwater search stemmed from unspecified leads indicating the couple who carried out the shooting spree had been in the vicinity of Seccombe Lake in San Bernardino on the day of the killings, said David Bowdich, assistant director of the FBI field office in Los Angeles.

Bowdich said he would not discuss the “specific evidence we’re looking for.”

CNN reported investigators were seeking a computer hard drive that belonged to the couple, who the FBI has said were inspired by Islamic terrorists. Bowdich said investigators already have combed the surrounding park, and that the search of the lake by FBI and Sheriff’s Department divers could take days.

Seccombe Lake Park lies about 2.5 miles north of the Inland Regional Center, the social services agency where 14 people were killed and 22 others injured when Syed Rizwan Farook and his wife, Tashfeen Malik, stormed a party of his coworkers there on Dec. 2 and opened fire with assault rifles.

Farook, 28, a U.S.-born son of Pakistani immigrants, and Malik, 29, a Pakistani native he married last year in Saudi Arabia, were slain hours after their attack in a shootout with police.

The FBI said it is treating the mass shooting as an act of terrorism, citing the couple’s declaration that they were acting on behalf of the Islamic State terror group, as well as a large cache of weapons, ammunition and bomb-making materials seized in the investigation.

The couple’s motives remain unclear. But if the crime proves to have been the work of killers driven by Islamic terrorist ideology, as the FBI suspects, it would mark the deadliest such attack on U.S. soil since Sept. 11, 2011.

The latest slayings and disclosures about the killers’ backgrounds have put U.S. law enforcement on heightened alert and reverberated into the U.S. presidential campaign, intensifying debates over gun control, immigration and national security.

Speaking to reporters at Seccombe Lake on Thursday, Bowdich disclosed the FBI was examining whether Farook had any links with the four conspirators in the Riverside case, as CNN and other media outlets have reported.

A jury last year convicted two of those men, including Afghan-born ringleader Sohiel Omar Kabir, of conspiring to provide material support and resources to al-Qaida and plotting to attack U.S. military forces in Afghanistan. Their two codefendants pleaded guilty in the case.

CNN, citing unnamed officials, reported Farook had been a member of Kabir’s social circle. Asked whether the FBI knew of any ties between Farook and the four convicted Riverside conspirators, Bowdich said: “It would be irresponsible not to investigate.” He stressed the four Riverside defendants were never accused of planning attacks within the United States.

U.S. government sources told Reuters on Thursday that Malik tried in vain to contact multiple Islamic terror groups in the months before she and Farook staged their attack, but her overtures were ignored.

The organizations Malik sought out likely shied away out of extreme caution in communicating with individuals unknown to them and a fear of being caught up in a law-enforcement “sting” operation, sources said.

The number of organizations that Malik attempted to approach and how she sought to reach them were unclear, though the groups almost certainly included al-Qaida’s Syria-based official affiliate, the Nusrah Front, the government sources said.

One source said investigators have little, if any, evidence that Malik or her husband had any direct contact with Islamic State.

While the terrorist group has since embraced the couple as among its followers, U.S. government sources have said there was no evidence Islamic State even knew of the couple before the San Bernardino killings.

Comey, along with U.S. Homeland Security Secretary Jeh Johnson and John Mulligan, deputy director of the National Counterterrorism Center, briefed members of both houses of Congress on Thursday about the investigation in closed, classified sessions.

“The current impression is that these two people were acting alone,” U.S. Senator Angus King of Maine told CNN after the briefing. But he added that he was troubled by the fact that the couple had tried to cover their tracks by destroying their cell phones and other electronic equipment.