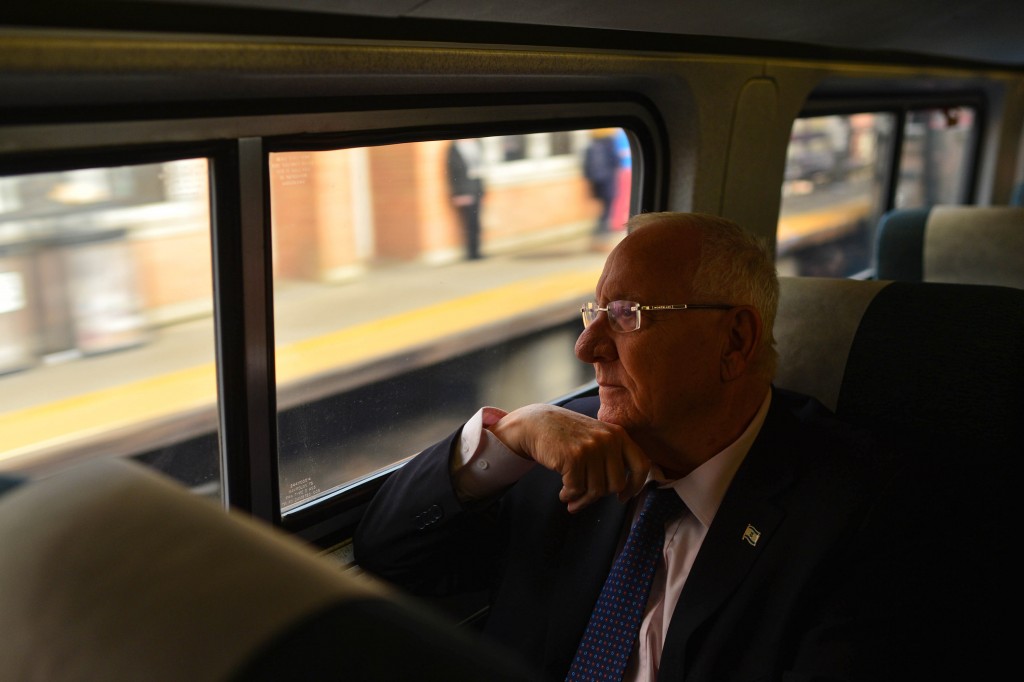 President Reuven Rivlin is in the United States to meet with U.S. President Barack Obama. The meeting Wednesday will be Rivlin’s first with the American president. Prior to the meeting, Rivlin will participate in a lighting of the Chanukah menorah at the White House.

Rivlin landed in New York late Tuesday, flying a commercial El Al flight, and then took a train to Washington. On Tuesday, Rivlin met with top Congressional leaders, including House Majority Leader Kevin McCarthy, House Minority Leader Nancy Pelosi, and Senate Majority Leader Mitch McConnell. Wednesday will be dedicated to the meeting with Obama, and the official candle-lighting, which is slated to take place at 3:30 PM EST.

On Thursday, Rivlin will deliver an address at the Brookings Institute, where he is expected to discuss the peace process and the ongoing Palestinian incitement against Israel. In an op-ed piece in the Washington Post Wednesday, Rivlin said that both sides needed to do more to encourage an atmosphere of trust. The Palestinians, he wrote, must cease inciting violence in Israel, while Israel must do more to improve the lives of Palestinians.

“It is clear that the Palestinians must end the incitement and violence against Israel,” Rivlin wrote. “They must end the rejection of the very existence of Israel. To Palestinian youths I say: For too many years, blood has been shed like water on this land. No blood is redder than any other. Lives matter.”

Rivlin also urged Israel to do its part. “Does anyone think that dealing with the sewage, roads, schools and medical centers of eastern Jerusalem can or should wait until the end of the conflict? Is there anyone who thinks the consequences of these economic disparities in the city will stop at genuine or fictitious political borders? At concrete walls or fences? Or as a result of this or that agreement on sovereignty?

“Israel must take steps to improve the situation independent of the geopolitical territorial debate — steps that every sensible person understands serve simultaneously Israel’s moral and practical interests,” he added.

Upon his departure from Israel Tuesday, Rivlin said that “I have always celebrated Chanukah together with my family and grandchildren, but if I must be away, I am pleased that it will be in the USA, alongside our strongest and closest ally. The friendship between Israel and the United States is an expression of a deep bond. It is the bond between two countries, and between two peoples, and I intend to express to the President, in the name of all the people, Israel’s appreciation for the uncompromising support of the United States, in each moment, and in every situation.

“These are days of great regional instability, and a far from simple security situation in Israel,” Rivlin reflected. “It is my intention to discuss these challenges with President Obama, alongside the ongoing discussion about the common values which we share – values of freedom and democracy – and I am in no doubt that the array of meetings planned during this visit will serve to further strengthen and deepen the relations between our peoples.”