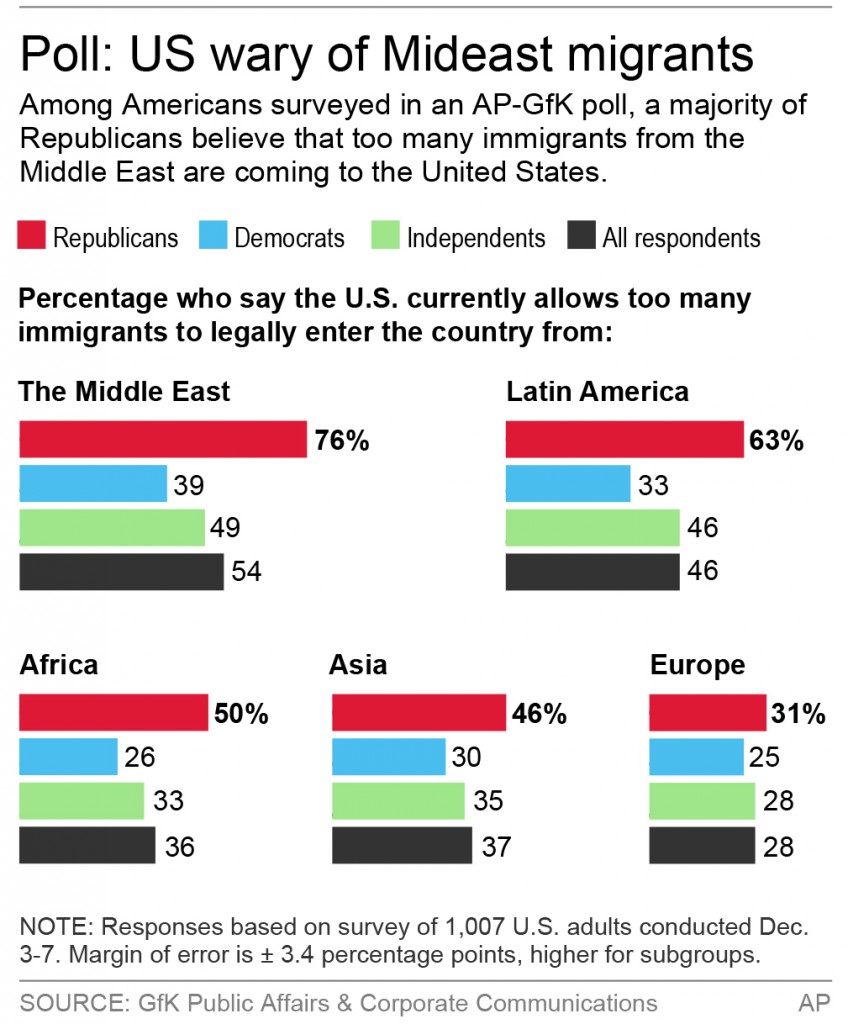 With his call for blocking Muslims from entering the United States, Donald Trump may be tapping into a deep concern among Republican voters about allowing Middle Eastern immigrants into the country, according to a new Associated Press-GfK poll.

In particular, a majority of Republicans see a high risk that refugees from Syria will commit acts of religious and political violence in the U.S., the poll finds.

The poll was conducted before Trump made his contentious proposal on Monday, so it does not reflect public opinion about the plan. But it indicates a suspicion of newcomers from the region where Muslims predominate and follows last week’s shootings in San Bernardino, California.

The AP-GfK survey found widespread antipathy toward immigration from the Middle East, with 54 percent of Americans saying the U.S. takes in too many people from the volatile region. Among Republicans, about three-quarters of respondents held that view, compared with about half of independents and more than a third of Democrats.

While the latter numbers could point to general election risks for Republicans taking a hard line against Muslims, there appear to be benefits in the GOP primaries.

Tea party backers, whites and older Americans — all important voting groups in Republican presidential primaries — were more likely to say immigration from the Middle East is too high. Among evangelical Christians, who wield significant power in the kickoff Iowa caucus, 63 percent of respondents held that view.

Officials say the couple who carried out the California attack — a U.S.-born man and Pakistani-born woman — had been radicalized for some time, with the wife pledging her allegiance to the Islamic State group. The killings came just three weeks after Islamic State terrorists claimed responsibility for attacks across Paris that killed 130, sparking fears about the terror group’s reach in the West.

Since then, Republican presidential candidates have escalated their rhetoric about Muslims, though Trump’s call for banning them from entering the country crossed a line for most of his rivals and many other Republicans who condemned his proposal as out of step with American values.

Trump’s proposal focused on all Muslims, not just those coming from the Middle East. The GOP front-runner previously called for banning all refugees from Syria, where ISIS has a stronghold. Polls conducted in November found few Americans in favor of an explicit religious test for refugees from Syria — such as giving preference to Syrian Christians — if they are allowed into the United States.

For some Americans already wary of Middle Eastern immigrants, Trump’s proposal could seem like an appropriate next step.

“For now, maybe we have to hold up because we have to figure it out,” said June Toler, a 51-year-old from Evans, Georgia. Toler considers herself an independent but is interested in Trump as well as GOP candidates Ben Carson and Marco Rubio.

Charles Chapman, 75, of Buffalo, New York, wants to go even further, halting all immigration into the U.S. for a year while officials work out plans to ensure no potential terrorists can enter.

“It seems like anyone can walk into the United States,” said Chapman, a Democrat. “The immigration policy needs to be stopped for a while and see what’s going on and then come up with a plan.”

However, several poll respondents who worry about Middle Eastern immigrants said in interviews afterward that Trump’s ban on Muslims goes too far.

“Over the top,” said Matthew Tisdale, a 27-year-old Republican from Metairie, Louisiana. “I don’t believe we should ban everyone who is following the Muslim religion. That would completely take away from our stance on freedom of religion.”

In 2014, the U.S. offered visas to more than 600,000 people from the Middle East, as well as Afghanistan and Pakistan, countries where the U.S. also has concerns about terrorism. That’s fewer than the 1.4 million visas granted in 2014 to Mexicans alone.

Republican presidential candidates have raised particular concerns about Syrians seeking to come to the U.S. as refugees. President Barack Obama has said the U.S. will take 10,000 refugees fleeing that country’s civil war next year.

The recent attacks have sparked fears that terrorists could try to sneak into Europe or the U.S. as part of the flow of refugees, although none of the perpetrators appears to have used that strategy. The AP-GfK poll found that 49 percent of Americans — including 70 percent of Republicans — see an extremely or somewhat high risk of Syrian refugees committing acts of religious or political violence in the U.S.

Among Democrats, 3 in 10 hold that view.

The AP-GfK Poll of 1,007 adults was conducted online Dec. 3-7, using a sample drawn from GfK’s probability-based KnowledgePanel, which is designed to be representative of the U.S. population. The margin of sampling error for all respondents is plus or minus 3.4 percentage points.

Respondents were first selected randomly using telephone or mail survey methods, and later interviewed online. People selected for KnowledgePanel who didn’t otherwise have access to the Internet were provided access at no cost to them.