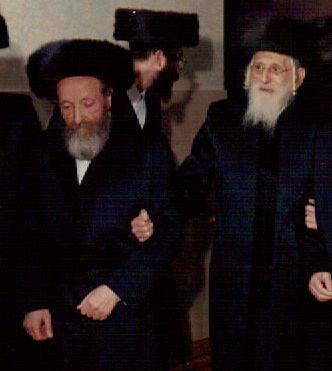 Reb Moshe Yosef Blum, the elder Bobover chassid whose demeanor symbolized for the younger congregants the bearing and conduct of an alte chassid and whose nusach enveloped the shul in the spirit of Yamim Nora’im, was niftar on Wednesday after a lengthy illness.

Reb Moshe, who was four days shy of his 95th birthday, survived the Holocaust in his native Galicia with his emunah intact. He would cry ceaselessly by Chanukah licht, when his extended family would come to visit. His weeping was tears of joy, said a granddaughter.

“In Auschwitz,” she said, paraphrasing her grandfather’s emotions, “he never thought he’ll see a family, and now he was surrounded by children, grandchildren and even great-grandchildren.”

Reb Moshe will be long remembered in Bobov, several members of that kehillah said.

“He was the symbol of an alte chassid,” one of them told Hamodia. “He was always ‘hatznei leches,’ so warm. He never hurt a fly. They don’t make them like him anymore.”

Another said that even though he no longer davens in Bobov, he would come back just for Rosh Hashanah to hear Reb Moshe’s Shacharis.

“He had such a beautiful nusach,” he said. “He would add a krechtz here or there, but the nusach was the same from year to year.”

As recently as four years ago Reb Moshe still davened before the amud for Avinu Malkeinu.

Reb Moshe was zocheh to children who are widely respected and revered, talmidei chachamim and dayanim. One of his sons, Harav Benzion, is a son-in-law of the Bobover Rebbe, Harav Shlomo Halberstam, zt”l.

They took their capabilities and qualities from their father, one person who knew Reb Moshe said.

“If you look at the children,” he said, “you could see where they came from.”

Born in the city of Sanz in 1921, Reb Moshe’s parents were Reb Chaim Dovid — a renowned composer whose niggunim are today sung throughout the world — and Toiba Blum, Hy”d. Both of them were killed in the war.

After surviving Auschwitz and left nearly without family — only one sister survived along with him — Reb Moshe rebuilt his life when he married Feigel Frankel in 1949 in the Fernwald DP camp in Germany. The daughter of Reb Moshe Frankel of Ushpitzin, she grew up in a home steeped in Torah and chassidus. They moved to New York, settling in Brownsville.

The young couple grew close with the Yardenever Rav, z”l, and were among the Bobover Rebbe’s ardent chassidim.

The family later moved to Boro Park, where they raised their children with an exemplary chinuch transplanted directly from der heim that they came from.

Reb Moshe was ill these past few years and was niftar on Wednesday afternoon. The levayah took place later that night in the Bobover shul in Boro Park. Maspidim were his son, Harav Chaim Dovid Blum, and the Bobover Dayan, Harav Chaim Yaakov Tauber.

Shivah will be observed at 1342 50th Street until Wednesday morning.