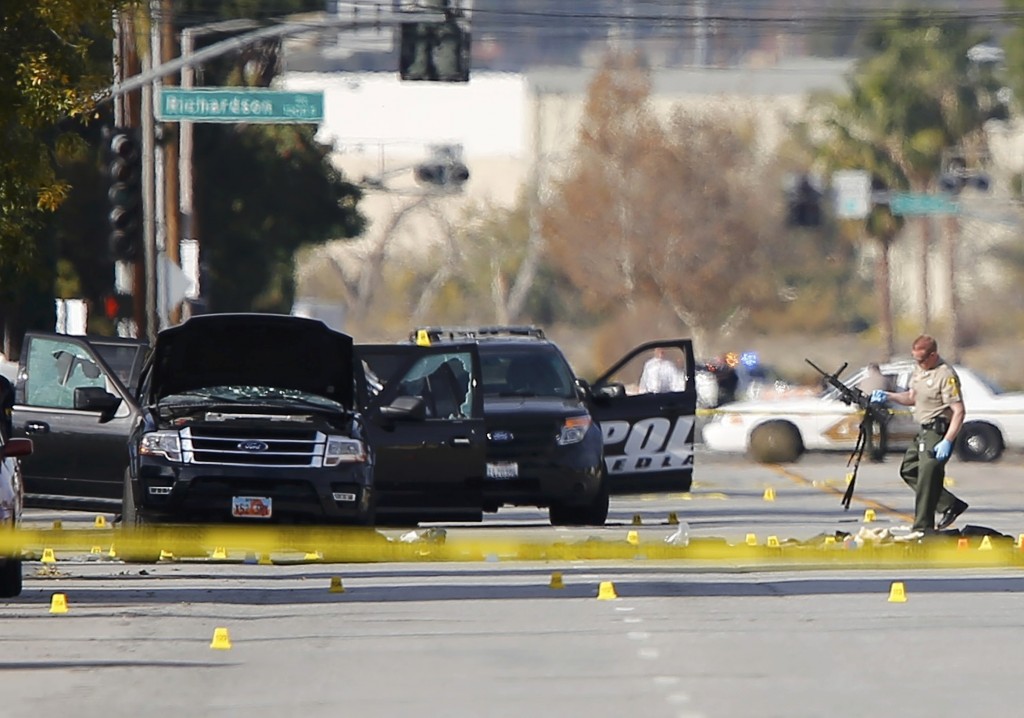 At age 28, Syed Rizwan Farook inspected restaurants and public pools. A Muslim, he was from a self-described religious but modern California family. But on Wednesday, he and Tashfen Malik, 27, left their infant daughter with Farook’s mother, put on black assault-style clothing, armed themselves and launched the deadliest U.S. shooting spree in three years.

The couple stormed a holiday party attended by his San Bernardino County co-workers, killing 14 people and wounding 21 in what appeared to be a planned attack before dying in a shootout with police, leaving a shaken community with few clues to deduce a motive for the carnage.

A U.S. citizen born in Illinois, Farook worked as a county environmental health specialist, inspecting restaurants and swimming pools for health violations, according to authorities and a website that tracks public employees.

Co-workers told the Los Angeles Times that Farook had traveled to Saudi Arabia and returned with his new wife, whom he had met online.

Farook was the son of immigrant parents from Pakistan while Malik was born in Pakistan and lived in Saudi Arabia until she was introduced to Farook, according to Hussam Ayloush, head of the Los Angeles chapter of the Council on American-Islamic Relations (CAIR). They were married for two years, Ayloush said.

Tashfeen Malik was a conditional resident in the U.S. after marrying a citizen.

The FBI said Malik came to the U.S. in July 2014 on a Pakistani passport and a so-called fiancée visa. To get the visa, she had to submit to an in-person interview and biometric and background checks to ensure she wasn’t a threat to public safety or national security.

By law, Malik had 90 days to get married or leave the country. She became a conditional resident after marrying Syed Farook. Two years after the wedding, she could have applied to stay in the U.S. permanently.

On Wednesday, Farook attended an annual holiday gathering for employees of his department – held at the Inland Regional Center, a social services center – then left, only to return later with Malik and weapons, authorities said.

San Bernardino Police Chief Jarrod Burguan said that the shooting spree was clearly planned in advance and that the suspects had left several explosive devices, which appeared to be pipe bombs, at the scene of the massacre.

“They came prepared to do what they did as though they were on a mission,” Burguan said.

Farook had no criminal record so far as police knew, Burguan said.

SueAnn Chapman, a cashier and waitress at a restaurant that Syed Farook had inspected earlier this year, said he did not seem unusual.

“He was real quiet,” Chapman said. “He checked the food and said he was here because somebody complained. … He looked completely normal.”

The couple left their infant child with Farook’s mother in the nearby city of Redlands, Ayloush said, relaying information he had received from a brother-in-law of Farook. The couple said they were headed to a doctor’s appointment for Malik.

Burguan said police went to a house in Redlands on Wednesday afternoon, and saw the couple take off in a black sport-utility vehicle. Police pursued the car to San Bernardino, where a wild gun battle ensued that left Farook and Malik dead.

A U.S. intelligence official said Farook had been in touch on social media with terrorists who are under FBI scrutiny.

The official would not further describe the contacts by Farook. He would not be quoted because he was not authorized to discuss the matter publicly.

The official said investigators are still trying to determine whether and how he became radicalized and whether he was in contact with any foreign terrorist organization.

According to law-enforcement sources cited by The Washington Times, the couple began erasing their digital footprint a day before the attack — they deleted email accounts, disposed of hard drives and smashed their cellphones.