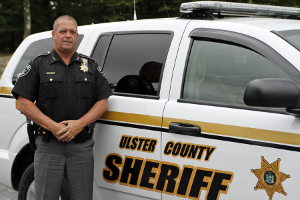 An upstate New York sheriff is urging residents of his county who are licensed gun owners to arm themselves when they leave home, citing recent mass shootings in the United States and Paris.

“I urge you to responsibly take advantage of your legal right to carry a firearm,” Ulster County Sheriff Paul Van Blarcum, a Democrat, wrote less than 24 hours after 14 people were shot dead in San Bernardino, California.

The post quickly drew hundreds of comments, for and against it.

“I’m not trying to drum up a militia of any sort,” Van Blarcum told The Associated Press on Thursday. “It’s just a reminder that if you want to, you have a right to carry it. It might come in handy. It’s better to have it than not have it. We’re partners with the public in crime prevention.”

Many commenters thanked Van Blarcum, saying people should be prepared to defend themselves. Others accused the sheriff of inciting vigilantism and said it’s irresponsible to encourage those who are untrained in active shooter situations to carry guns.

“There were more positive comments than negative, but the negative ones are very adamant,” Van Blarcum said. “I respect the people who disagree with me. As a licensed handgun owner, you make the decision whether you want to carry it or not. It’s a personal decision.”

The sheriff also urged all police officers, whether on active duty or retired, to never leave home without a firearm.