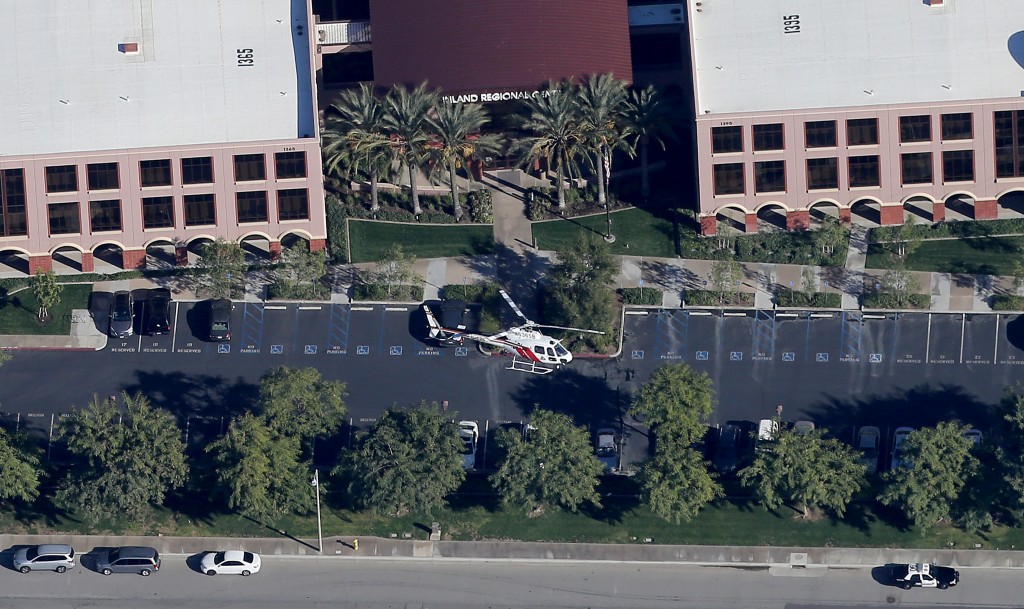 Police Chief Jarrod Burguan said at a news conference that after the shooting, the suspects might have fled the area in a dark-colored SUV. They remained at large.

Burguan said the number of people killed and wounded were preliminary estimates that could change.

San Bernardino police spokesman Sgt. Vicki Cervantes told The Associated Press there were reports from witnesses of between one and three shooters.

“It still is an active, fluid situation,” she said, adding that police were still trying to clear the complex. “We have not located any suspects.”

Police shed no light on a motive. President Barack Obama was briefed on the attack by his homeland security adviser.

Witnesses said several people locked themselves in their offices, desperately waiting to be rescued by police, after gunfire erupted at the Inland Regional Center, which serves people with developmental disabilities.

The attack took place in a conference area where the San Bernardino County Department of Public Health was holding a banquet, said Maybeth Field, president and CEO of the social services center. She said the building houses at least 25 employees as well as a library and conference center.

FBI agents and other law enforcement authorities converged on the center and searched for the shooter or shooters.

As the manhunt went on, stores, office buildings and at least one school were locked down in the city of 214,000 people about 60 miles east of Los Angeles, and roads were blocked off.

Triage units were set up outside, and people were seen being wheeled away on stretchers. Others walked quickly from a building with their hands up. They were searched by police before being reunited with loved ones.

Terry Petit said his daughter works at the center, and he got a text from her saying she was hiding in the building after hearing gunshots. Petit choked back tears as he read the texts for reporters outside the center. He said she wrote: “People shot. In the office waiting for cops. Pray for us. I am locked in an office.”

Marcos Aguilera’s wife was in the building when the gunfire erupted. He said a shooter entered the building next to his wife’s office and opened fire.

“They locked themselves in her office. They seen bodies on the floor,” Aguilera told KABC, adding that his wife was able to get out of the building unharmed.