Day in and day out, sedans, SUVs, convertibles and pickups pour in and out of the Fuel City gas station on the outskirts of downtown Dallas. They’re headed to Austin or Abilene or Shreveport or maybe just down the road, just as they did 16 months ago when gasoline was selling for $3.50 a gallon.

Except now, there are more of them. It’s not enough to see with the naked eye, but when owner John Benda reviews his sales, he can see it.

“People are taking road trips again. The trucking companies have been doing more deliveries, and they’re not complaining about the price of diesel anymore,” he said. “I would say (gasoline sales are) up 7 percent, 8 percent, which is a lot for me.”

The dramatic decline in gasoline prices over the past year has come as a relief to motorists, for whom the prospect of $2-a-gallon gasoline once seemed the stuff of nostalgia. And as the principles of economics dictate, they’re filling up more often.

For the first time since 2010, U.S. gasoline consumption was higher this summer than it was the year before. Americans on average pumped more than 370 million gallons of gasoline a day between June and August, a 5 percent increase over 2014 and the largest 12-month increase since the U.S. Energy Information Administration started recording that data in 1983. Texas, with its booming economy, never stopped growing and posted its largest gain on record this summer.

The recent spike reverses a years-long slide in U.S. gasoline consumption, driven in large part by high prices and new federal standards that required better fuel efficiency on new vehicles. According to the EIA, America’s thirst for gasoline peaked in the summer of 2005 at 395 million gallons a day on average. Ever since, it’s been on a fairly steady downward slide.

Until now. As the lows in gasoline prices continue, Americans – initially hesitant to respond to the price drop – have been consuming more and more fuel.

“Americans were put on this earth to consume. Take a dollar off a gallon of gas, and we know what to do with it,” Ken Hersh, the co-founder of NGP Energy Capital Management, said during a speech at the George W. Bush Institute last month.

First, Americans are simply driving more than they have in recent years. As of July 31, Americans had driven 1.8 trillion miles in 2015 – 4 percent more than they did last year, according to estimates by the U.S. Department of Transportation.

Second, we’re buying bigger and less-efficient cars. U.S. pickup and SUV sales are growing by double digits. Last month, researchers at the University of Michigan reported that the fuel efficiency of new vehicles pulling off the lot had fallen 2 percent since August 2014. That ended what had been a fairly steady upward trajectory – from late 2007 to last August the average new American vehicle went from 20.1 mpg to 25.8 mpg.

“There’s a level of price where people start changing habits,” said Will Speer, an analyst in Houston with the research firm GasBuddy. “Before gas prices became so affordable, you never would have considered the SUV because it was guzzling so much gas. Now if you look up how many Google searches of car efficiency, that has actually gone down with lowering of gasoline prices.” 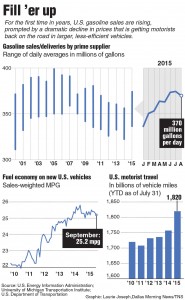 For those on the road, the last 10 months harken back to better economic times, when filling up hardly gave motorists a second thought. Gasoline prices in Texas have stayed below $2.50 a gallon on average for all but a couple months this summer, when crude prices briefly rebounded.

Right now, U.S. gasoline prices are averaging less than $2.01 a gallon, according to GasBuddy. In Texas, the average is only $1.84 a gallon. Analysts are predicting prices will continue to fall through early 2016, bottoming out around February.

Ben Tison, vice president of fuel operations for 7-Eleven, said that once oil prices rebounded he expected gasoline to level out around $2.50 a gallon.