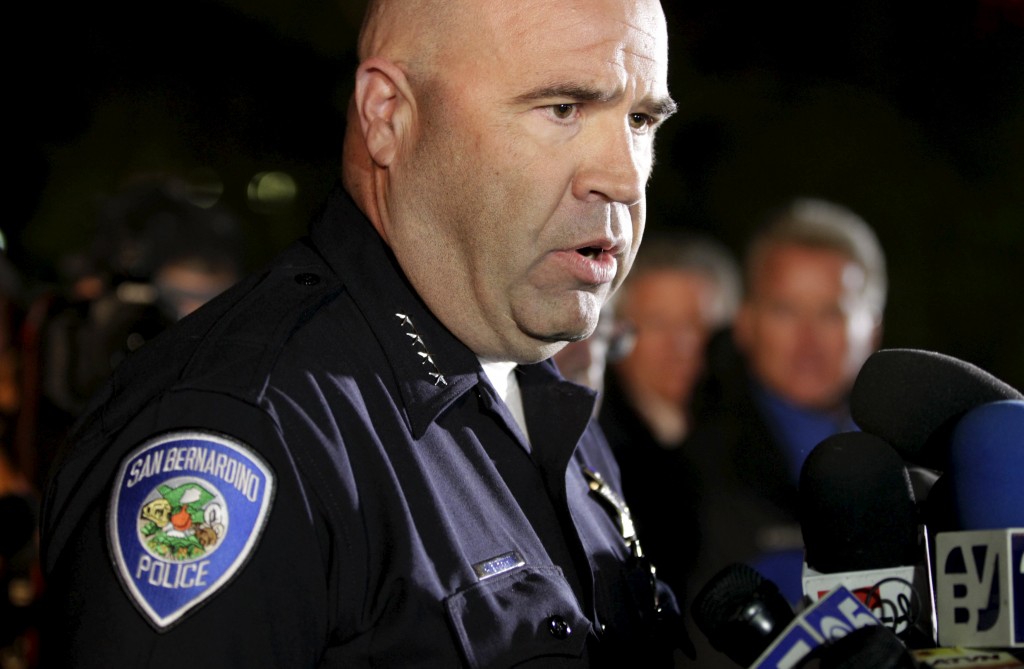 A couple who were suspected of killing 14 people in a mass shooting in California and were later slain in a shoot-out with police were identified by authorities late Wednesday as Syed Rizwan Farook, 28, and Tashfeen Malik, 27.

Armed with assault-style weapons, the two are believed to have opened fire Wednesday morning at a social services agency holiday event in San Bernardino, California. The attack, which also left 17 wounded, was the most deadly shooting in the United States in three years.

Farook was an employee of San Bernardino County who attended a holiday party at the Inland Regional Center, during which he stormed out and then later returned to fire on the celebration, said Jarrod Burguan, police chief in the city of San Bernardino, 60 miles (100 km) east of Los Angeles.

The couple are believed to be the only shooters, and while the motive remained unclear, Burguan said, “we have not ruled out terrorism.”

Farook was U.S. born, while Malik’s nationality was still unknown.

The shooting rampage on the campus of an agency that serves the developmentally disabled marked the deadliest U.S. gun violence since the massacre at Sandy Hook Elementary School in Newtown, Connecticut, in December 2012, in which 27 people, including the gunman, were killed.

Wednesday’s carnage differed from most other recent U.S. killing sprees in key ways, including the involvement of two people rather than a lone perpetrator.

It also comes less than three weeks after the deadly attacks in Paris prompted tighter security at many public venues across the United States.

Police shed no light on a motive for the massacre, “They came prepared to do what they did, as if they were on a mission,” Burguan said, noting the attackers carried long guns — which can mean rifles or shotguns.

Witnesses said several people locked themselves in their offices, desperately waiting to be rescued by police, after gunfire erupted at the Inland Regional Center, which serves people with developmental disabilities. Some people telephoned their loved ones and whispered to them what was going on.

The attack took place in a conference area where the San Bernardino County Department of Public Health was renting space to hold a banquet, said Marybeth Feild, president and CEO of the center. She said the building houses at least 25 employees as well as a library and conference center.

FBI agents and other law enforcement authorities converged on the center and searched room to room for the attacker or attackers, but it was feared that they had escaped.

Ten of the wounded were hospitalized in critical condition, and three were in serious condition, San Bernardino Fire Chief Tom Hannemann said. Police cautioned that the numbers of dead and wounded were early estimates that could change.

No weapons were recovered at the center, though authorities were investigating unidentified items in the building and brought in bomb squads, Burguan said.

As the manhunt went on, stores, office buildings and at least one school were locked down in the city of 214,000 people about 60 miles east of Los Angeles, and roads were blocked off.

Triage units were set up outside the center, and people were seen being wheeled away on stretchers. Others walked quickly from a building with their hands up. They were searched by police before being reunited with loved ones.

President Barack Obama was briefed on the attack by his homeland security adviser.

He said it was too early to know the shooters’ motives, but urged the country to take steps to reduce the frequency of mass shootings. He told CBS that stricter gun laws, including stronger background checks, would make the country safer.

“The one thing we do know is that we have a pattern now of mass shootings in this country that has no parallel anywhere else in the world, and there’s some steps we could take, not to eliminate every one of these mass shootings, but to improve the odds that they don’t happen as frequently,” Obama said.

The shooting sounded like “an organized plot,” and preliminary information seems to indicate that “this is personal, and there seems to suggest some element of revenge and retaliation,” said Erroll G. Southers, director of Homegrown Violent Extremism Studies at the University of Southern California and a former FBI agent.

Terry Petit said his daughter works at the center, where social workers find jobs, housing, transportation and provide programs for people who have disabilities such as autism, cerebral palsy and epilepsy. He got a text from her saying she was hiding in the building after hearing gunshots.

Petit choked back tears as he read the texts for reporters outside the center. He said she wrote: “People shot. In the office waiting for cops. Pray for us. I am locked in an office.”

Sherry Esquerra was searching for her daughter and son-in-law, both of whom work at the center. She said her daughter helps “very disabled” children and “gets all the services she possibly could for these kids.”

“I just don’t understand why somebody would come in and start shooting,” Esquerra said. She last saw her daughter at Thanksgiving and planned to see her Friday. When she calls her phone now, “Nothing. I just get her message. Straight to voicemail.”

Marcos Aguilera’s wife was in the building when the gunfire erupted. He said a shooter entered the building next to his wife’s office and opened fire.

“They locked themselves in her office. They seen bodies on the floor,” Aguilera told reporters, adding that his wife was able to get out of the building unharmed.

The social services center has two large buildings that require a badge to get in, said Sheela Stark, an Inland Regional Center board member. However, the conference room where many public events take place — including the banquet on Wednesday — is usually left open when visitors are expected.