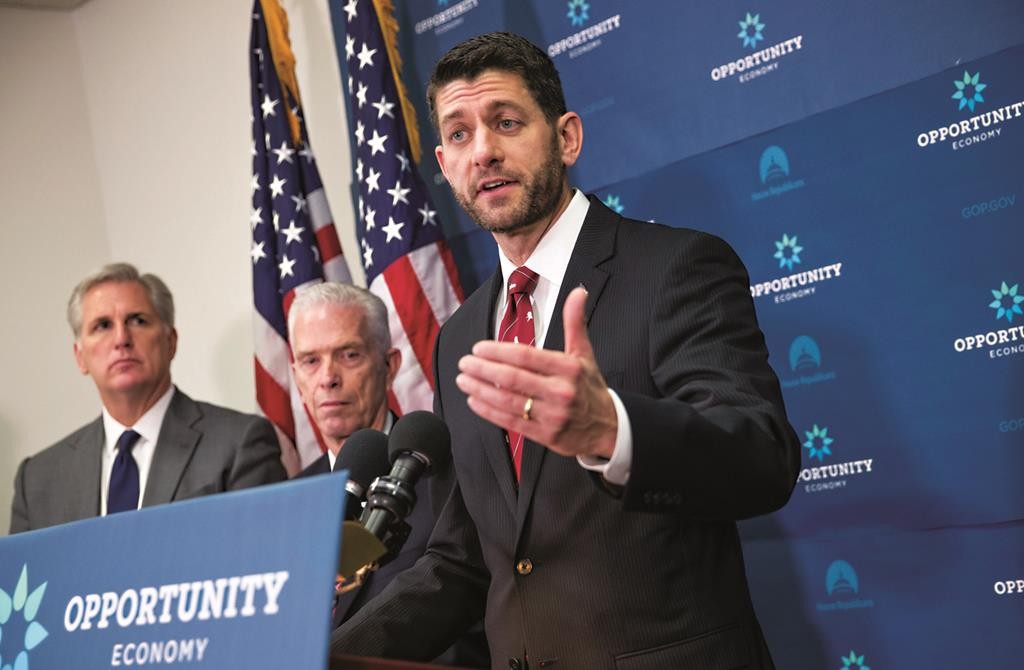 House Speaker Paul D. Ryan faces his first big test as Congress stares down a deadline to do something that has become increasingly difficult: pass a bill to fund the government.

With just seven workdays remaining before the Dec. 11 deadline, the new speaker will aim to leverage his political honeymoon into a strategy that will avoid another federal shutdown.

But already Ryan is under pressure to tack on a host of GOP policy provisions to the $1.1 trillion spending bill – among them, halt the entry of Syrian refugees into the U.S. and repeal the Affordable Care Act.

Forcing any of those extras into the bill might bolster support from Republican conservatives, but it would also unleash a backlash from Democrats, setting up a showdown in Congress and with the White House.

“We obviously have difference of opinions on all of these big issues,” Ryan said Tuesday, declining to explain how they might be resolved. “Those negotiations are ongoing right now.”

The Wisconsin Republican received an assist from House Majority Leader Kevin McCarthy of California, the No. 2 Republican, who suggested Monday that the Dec. 11 deadline to pass a spending bill might slip to Dec. 18, allowing more time to get rank-and-file Republicans on board.

Leaders need to tamp down GOP dissent over what will likely be a compromise with Democrats.

“Our first principle starting out is to get the most conservative bill we can,” McCarthy told reporters Monday in the Capitol, saying he was “hopeful” the voting could be wrapped up by the 11th, but noting that Dec. 18 is the final workday before lawmakers break for the Christmas holidays.

He added: “I do not see a shutdown happening.”

President Barack Obama previously said he would not sign another temporary funding bill beyond the one that runs out Dec. 11, but the White House softened that Monday, opening the door for a stopgap measure for just a few days.

Both sides had hoped that the two-year budget accord reached this fall would create a smoother landing for the year-end spending bill. But staff negotiators have struggled over working nights and weekends to try to reach a compromise.

The days ahead will be pivotal for Ryan, who has enjoyed mostly positive reviews since he took over for beleaguered House Speaker John A. Boehner this fall.

But Ryan’s leadership has not yet been seriously tested.

“I say with some confidence that the newly elected speaker of the House doesn’t want to preside over a government shutdown six weeks into his tenure,” White House press secretary Josh Earnest said. Just two months ago, the funding fight helped push Boehner out of office. Boehner decided to resign after conservatives threatened to oust him for refusing to engage in a protracted fight that could have resulted in a shutdown.

Hoping to avoid a similar outcome and unite the fractious GOP  majority, Ryan vowed to change the culture of House leadership, mainly by meeting the Republican lawmakers’ demands to be more involved in the decision-making process.

Ryan has tapped the chairmen of the Appropriation Committee subcommittees – the leaders responsible for the spending bill – to sit down with rank-and-file lawmakers to craft priorities in the pending legislation.

And the new speaker launched a second weekly conference meeting – the private GOP sessions in the Capitol basement – as a forum to discuss the thorny details of various policies.

“Our challenge that Paul has set out for himself – doing a little more regular order, doing bigger issues – you see us working toward that,” McCarthy said. “They feel they’re being listened to.”