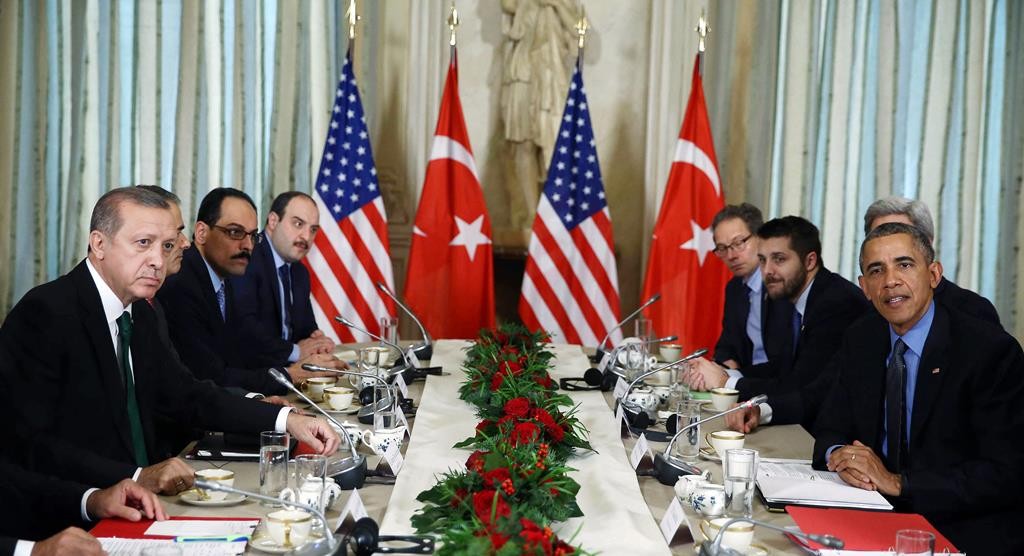 President Barack Obama expressed optimism Tuesday that Russia will ultimately come around on the need for Syrian President Bashar Assad to leave power to end his country’s long civil war, but warned the turnaround would not come overnight.

Discussing the Syria crisis with world leaders in Paris, Obama also urged Turkey and Russia to set aside recent tensions that have undermined his efforts to strengthen the U.S.-led coalition fighting to defeat the Islamic State group. Instead, he asked the two countries to focus on IS as a common enemy and on reaching a political solution for Syria.

Obama also said that it was possible over the coming months that Russia would undergo a “shift in calculations” and back away from its support for Assad.

“I don’t expect that you’re going to see a 180-degree turn on their strategy over the next several weeks,” Obama said. “They have invested for years now in keeping Assad in power. Their presence there is predicated on propping him up. That’s going to take some time for them to change how they think about the issue.”

Obama said he expects that diplomatic negotiations in Vienna to pursue a political solution to Syria’s civil war will move forward at the same time that the U.S.-led coalition applies greater pressure to defeat IS. Still, he conceded the extremist threat that has wrought fear across the Middle East and the West would not be eliminated in the short term.

Concerns about IS have overshadowed Obama’s two-day trip to Paris, where IS-linked attacks killed 130 people last month in the run-up to the climate negotiations. Obama had sought to turn the outrage over the Paris attacks and the group’s shoot-down of a Russian passenger jet in Egypt into new resolve for stepping up the fight against IS.

Yet those hopes have been dampened by the spiraling diplomatic crisis between Turkey and Russia, sparked late last month when Turkey shot down a Russian warplane it said had violated its airspace along the border with Syria. The U.S. sees both Russia and Turkey as critical to resolving the Syria crisis.

Aiming to head off a rift between the two major Mideast players, Obama urged both to “de-escalate” their conflict and not get distracted from the campaign against IS. Yet in a meeting with Turkish President Recep Tayyip Erdogan, Obama also vouched for the NATO ally’s right to self-defense, and he pledged a solid U.S. commitment “to Turkey’s security and its sovereignty.”

“We all have a common enemy. That is ISIL,” Obama said. “I want to make sure that we focus on that threat.”

Sitting down with Erdogan on the sidelines of climate talks, Obama said the U.S. was very interested in accelerating its military relationship with Turkey. He also praised Turkey for generously accepting refugees fleeing violence in Syria, and credited Turkey with strengthening security along its border.

Turkey, too, hopes to avoid tensions with Russia, Erdogan told reporters as he and Obama finished their roughly hour-long meeting. Waxing optimistic about a new diplomatic effort in Vienna aimed at a cease-fire in Syria’s civil war, Erdogan said he hoped it would result in “sigh of relief for the entire region.” The U.S., Russia and Turkey are all taking part in those talks.

“As the coalition forces, we are determined to keep up the fight against ISIS, and ISIS forces on the ground,” Erdogan said through a translator.

Yet in a fresh reminder of strains with Moscow, Erdogan repeated his denouncement of Russian airstrikes in Syria’s Turkmen region. He said more than 500 civilians had been killed recently in an area where he said Islamic State fighters are not operating.

“They are Turkish descendants,” Erdogan said. “That area is continuously bombed.”