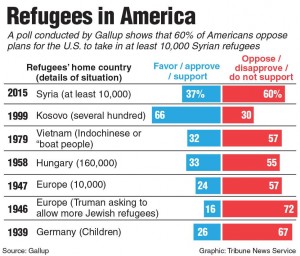 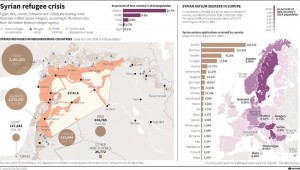 Former top national security officials from Republican and Democratic administrations urged Congress on Tuesday to continue allowing the resettlement of Syrian and Iraqi refugees in the United States.

“Refugees are victims, not perpetrators, of terrorism,” the 20 retired military and security experts and others wrote in a letter sent to all lawmakers. “Categorically refusing to take them only feeds the narrative of ISIS that there is a war between Islam and the West, that Muslims are not welcome in the United States and Europe, and that the ISIS caliphate is their true home.”

ISIS is one of the acronyms for the Islamic State group.

Last month, the House voted overwhelmingly to erect high hurdles for Syrian and Iraqi refugees to come to the United States in the aftermath of the terror attacks in Paris. The bill would require new FBI background checks and individual sign-offs from three high-ranking U.S. officials before any refugee could come to the United States from Iraq or Syria, where the Islamic State, that claimed credit for the attacks, has flourished.

The Obama administration, which has announced plans to accept about 10,000 Syrian refugees in addition to the 2,500 who have settled here since 2011, says it already takes around 18-24 months on average for them to make it into this country. They must pass a battery of screening requirements, including interviews overseas, fingerprinting and biometric investigations. Many are women and children and only about 2 percent are single men of combat age.

Republicans have called for a pause in the system, a reflection of their constituents’ anxiety. Forty-seven House Democrats broke with President Barack Obama and backed the legislation.

The bipartisan group of former officials said they opposed the legislation, arguing that the vetting of refugees is robust and thorough.

“Given the stringent measures in place, we are especially concerned by proposals that would derail or further delay the resettlement of Iraqis who risked their lives to work with the U.S. military and other U.S. organizations,” the letter said.

The legislation is pending in the Senate, where Majority Leader Mitch McConnell (R-Ky.) said Tuesday that the issue will be part of the must-pass spending bill that Congress needs to complete later this month to keep the government open.

This article appeared in print on page 15 of the December 2nd, 2015 edition of Hamodia.