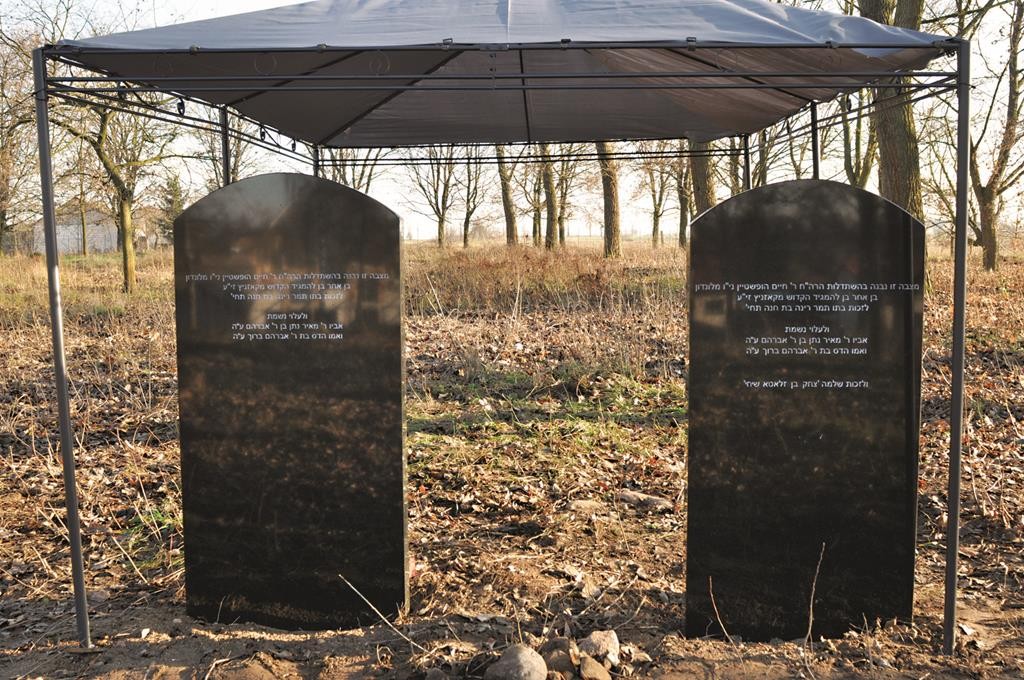 A gathering of approximately 50 people from London took part in a moving hakamas matzeivah for the holy tzaddik Harav Aharon of Kozhnitz, zt”l, whose burial place in Zelechow, Poland, was recently rediscovered after an extensive search.

Rav Aharon of Kozhnitz was known before World War II as a holy tzaddik and baal mofes who was highly respected by the Gedolim of his generation. He was niftar in Zelechow in 5702/1942.

Due to wartime conditions, no matzeivah was erected and the location of the kever was forgotten when the beis hachaim was destroyed during the war.

Seventy years passed when, amazingly, the Rebbe of Kozhnitz appeared in a dream to an askan in New  York who is involved in organizing group visits to kivrei tzaddikim in Poland. The Rebbe asked him how it is that he is busy locating other kevarim, but he has not worked on identifying the kevarim of the beis hachaim in which he, the Kozhnitzer Rebbe, is buried. The askan soon got in touch with Reb Chaim Hopstein, a direct descendant of the Kozhnitzer Rebbe, and told him about the dream. Astonished, they immediately set to work to investigate the situation at the Zelechow beis hachaim. An incredible sequence of events eventually enabled them to determine the location of the Rebbe’s kever.

At first there were conflicting reports as to exactly where the Rebbe was niftar and where he was buried. Gradually it became clear that he was in fact niftar in Zelechow, and was buried next to the ohel of the great tzaddik Rav Aharon Hakohen, zt”l, a famous talmid of the Mezeritcher Maggid and the author of Kesser Nehora.

A group of yungeleit traveled there and were shocked and distressed at the state of the Zelechow beis hachaim, which was completely overgrown and had very few remaining matzeivos. An elderly local resident soon offered to show the group exactly where the ohel of the Kesser Nehora had once stood. Indeed, after clearing the trees and bushes, the foundations of the ohel were discovered at that spot. Within days this man died; perhaps his life had been spared until then so that the location of those kivrei tzaddikim could be rediscovered.

The group set to work immediately, clearing the spot and preparing it for the placement of matzeivos for the two great tzaddikim. After consulting with Gedolim, they composed a nusach for the matzeivah of the Kozhnitzer Rebbe and made plans to rebuild the ohel over the kever of the Kesser Nehora. The matzeivos for both tzaddikim were dedicated on 11 Kislev by a large group, headed by Rav Shimon Hirschler of London.

After arriving in Warsaw, the group headed straight to the beis hachaim in Zelechow, where they recited Tehillim together, accompanied by heartfelt tefillos for yeshuos for Klal Yisrael. This was followed by a stirring address by Reb Chaim Hopstein, a devoted descendant of the Rebbe of Kozhnitz who has dedicated himself wholeheartedly to this project, organizing and raising the considerable funds required to erect  the matzeivos and rebuild the wall around the beis hachaim.

From Zelechow the group traveled to Kozhnitz, to the kevarim of the Kozhnitzer Maggid and his descendants. After tefillos there, a l’chaim was held, and Rav Hirschler and Rav Shimon Domb gave those assembled a glimpse into the greatness of Rav Aharon of Kozhnitz and of the other tzaddikim of the Kozhnitz dynasty. From there they returned to London, bringing home memories of the inspirational trip.