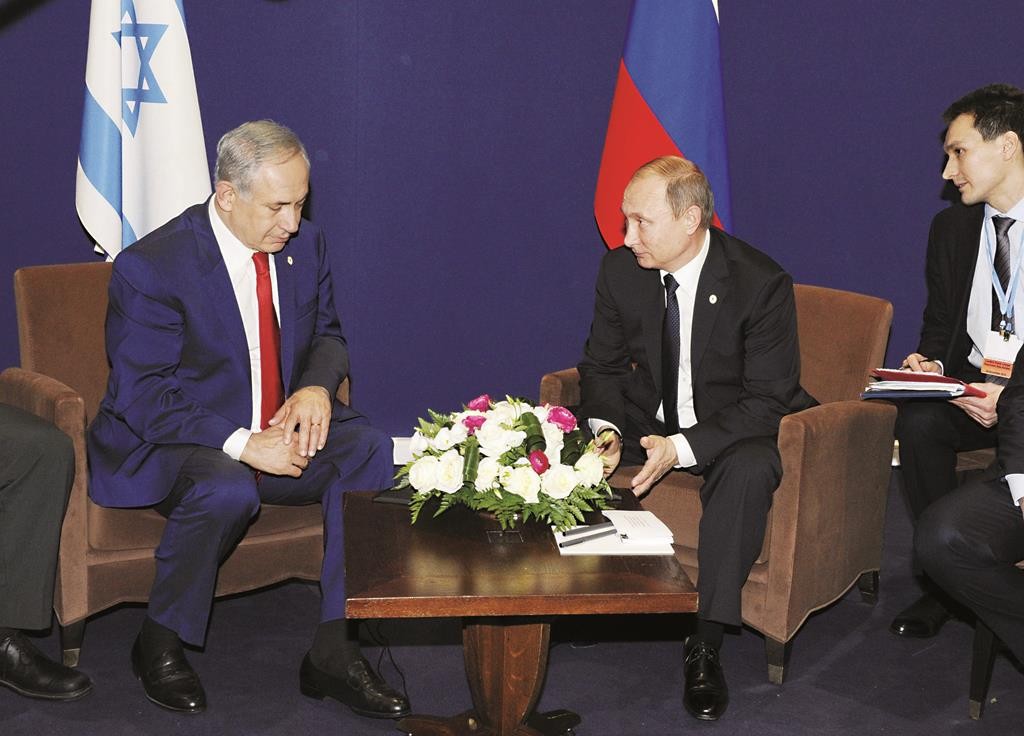 They also discussed the need to prevent unintentional confrontations in the air as both Russia and Israel conduct operations over Syrian airspace.

Putin surprised Netanyahu by opening their conversation by asking him to convey his blessing for Chanukkah to the people of Israel.

“We delved into great detail about all that is happening in the region, including the incident with Turkey, and President Putin updated me on all that is going on,” Netanyahu said.

Before that, Netanyahu held an interesting, impromptu meeting with President Barack Obama. Together, they joined the almost 150 world leaders for a group photo.

After the photo-op, Obama turned to Netanyahu, warmly shook his hand and then the two talked for a quarter of an hour about political matters as they walked. Reporters nearby could not hear what they were saying, but from appearances it was a very friendly conversation.

At the end, Secretary of State John Kerry joined them.

Afterwards, Netanyahu revealed that during his walking chat with Obama, the Palestinian issue was the chief topic, though they also discussed the rift between Russia and Turkey in the wake of the downing of the Russian plane by Turkey

According to Netanyahu’s spokesman, in the first two hours after his arrival he spoke briefly with a series of other world figures, including German Chancellor Angela Merkel, French President Francois Hollande, British Prime Minister David Cameron, Italian Prime Minister Matteo Renzi and Prince Charles, whom he invited to visit Israel.

Most interesting of all, though, was his meeting with Palestinian Authority President Mahmoud Abbas, with whom he briefly shook hands. It was their first face-to-face encounter since 2010.

However, there was no exchange of words between them.

Netanyahu also participated in a reception for the leaders hosted by French President Hollande, during which Arab diplomats whose governments have no formal relations with Israel went over and chatted with the Israeli prime minister, and offered encouraging remarks to the effect that only the way that Israel responds to terror is the right way.

At the same time, they expressed their hope for the resolution of the Israeli-Palestinian conflict, which would pave the way for normal relations with Israel.

Other leaders also talked with Netanyahu about the possibility of cooperating with Israel in the war on terror.

Netanyahu was invited by Hollande to a personal talk, something that only a few of the leaders were granted. They discussed at first the issue of climate change, but the discussion quickly turned to the war on terror, which is on everyone’s mind.

Netanyahu brought with him many ideas, based on the Israeli understanding of the problem and the country’s vast experience with it. This was no doubt the reason why Hollande gave such importance to meeting with the Israeli leader.

In particular, Hollande was anxious to hear how the Israeli security forces have been able to react so quickly, arriving at sites of terror attacks within minutes, fully armed and equipped.

The French, by comparison, have been very slow. On the day of the Paris attacks, it took French police an hour and a half to two hours to arrive at the scenes, and even then many were not armed. It was only this week that the French made the decision to arm police routinely. Until now, they patrolled without firearms.

When the U.N. began planning the conference three years ago, they were sure that world leaders would concentrate on the dire consequences of global warming, including millions of fatalities.

According to the researchers, the civil war in Syria was actually a result of climate change. A six-year drought in northern Syria drove millions of farmers to the cities. There, they failed to find employment, the frustration turned against Assad, the flag of rebellion was raised, and the rest is history.

The experts are warning that if effective measures to turn around climatological trends are not taken immediately, much the same could happen in other countries.

However, despite the formal attention to climate at the conference, the urgent issue of global terrorism dominated the informal or semi-formal conversations among the leaders. Such was the case with Netanyahu’s meeting with Putin, as well as with the leaders of Poland, Canada, Australia, and others.

The official color of the conference is green; but the color that dominated everywhere was the color of black, of terror, that now threatens the world.

And while the meteorologists cited data and predicted that the coming year would be the warmest on record, the world leaders discussed the war on terror. They noted that over the past year, more people have been killed in terrorist attacks than in any previous year. In Iraq alone, some 32,000 civilians were killed in terror attacks, and that is in addition to those killed in Syria, Yemen and other countries.