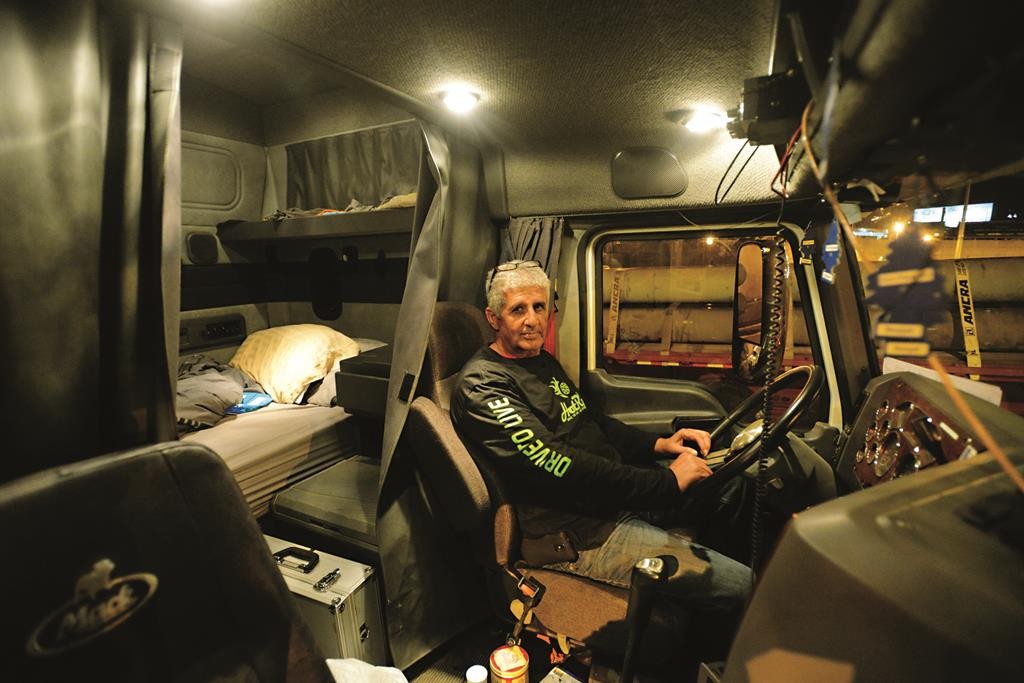 Here is an abridged list of really big things that crossed the George Washington Bridge in the past few weeks: A flatbed piled with backyard sheds bound for Long Island. A 30-foot pleasure boat built by Wellcraft of Cadillac, Mich. One-half of a prefabricated house, triangular steel plates resembling the tail wings of an F-15 fighter jet, and a Casagrande B250 XP drilling machine that weighed 82 tons.

Oversize loads cross the bridge every night, usually at dusk. North Jerseyans and others with reverse commutes are familiar with the sight: Every weeknight, these behemoth trucks queue up in the trench that takes Route 95 through Fort Lee, just west of the George Washington Bridge.

Mostly, the trucks carry construction materials. One evening this month, truck driver Issa Abu hauled a 75,000-pound hunk of solid steel to Tower A at Hudson Yards, a new neighborhood being built on Manhattan’s West Side. The next night he transported a blue plastic net, 11 feet wide, which was hung from Tower 3 at the World Trade Center to prevent construction tools and workers from falling over the side.

Those loads were merely oversize, however.

Several weeks ago, Bob Eposti drove one that was supersize: a single concrete beam, 142 feet long and 180,000 pounds, bound for the new Kosciuszko Bridge in Brooklyn. Add in the truck itself, and Eposti was driving a vehicle 178 feet long. The beam, and three others just like it, were so long they required their own convoy, which stretched on for more than three football fields and required a second closure of the George Washington Bridge, at midnight.

“Most people don’t know what goes into taking a big piece into the city,” said Jimmy Danna, 42, who drives oversize loads across the George Washington Bridge for the Harris Camden Terminal transport company. “The fact that we come in here every night and haul all this heavy stuff and don’t hit anything? It’s amazing.”

New Yorkers enjoy calling their city the center of the universe. This is a lie, of course. Apart from the Bronx, New York City is an archipelago connected tenuously to the rest of the world. Everything needed to build the city, from the steel that girds its famous skyline to the concrete that makes its famously clogged highways, comes from someplace else.

“We’re here every night, hauling loads to the biggest construction projects in New York,” said Issa Abu, 55, who has hauled oversize loads for nearly 25 years. “That’s all we do.”

Here, then, is how New York City gets built: At night, one oversize load at a time, on trucks driven across the George Washington Bridge by men like Bob Eposti and Abu.

At 11:59 p.m. that Tuesday night, a voice crackled over the radio in Eposti’s truck — one of three to haul the 140-foot-plus beams across the span.

“Be advised,” someone near the front of the convoy said. “Five minutes to start.”

Four minutes later, NYPD officers began darting around in their white Ford squad cars. The convoy must keep a tight formation at all times to prevent people from cutting through. But that is often a losing battle, the truck drivers said. Every night, cars try to break the convoy. And in Manhattan, street-toughened pedestrians have no second thoughts about walking right under the load.

“People see you coming in a truck like this, and they’ll do crazy things to avoid getting stuck behind you,” Danna said. “They have no idea how dangerous it is. I can’t see around the truck. I can’t turn. I can’t stop.”

As the convoy began to roll, three police cars blocked the lanes of the highway, effectively closing Route 80. Moving slowly with their long bridge beams in tow, each truck took nearly a minute to crawl through the toll plaza.

“Can’t get in no hurry,” said Tyler Fisher, 43, driver of the second truck. “You just take your time and pay attention.”

Already there were problems. A minivan darted through the toll plaza, passed the police cars in the rear, and stopped in the middle of the convoy. Two more sedans followed, and likewise got trapped.

“Why is there still civilians coming through!” someone yelled over the radio. “Get them out of here!”

An NYPD officer drove up behind the errant drivers and instructed them to pass the convoy on the left. The trucks rolled forward, but slowly, because two of the bridge’s four lanes were blocked by construction equipment. They gathered speed on the Trans-Manhattan Expressway, and crossed the Harlem River at 40 mph, their top speed that night.

Next came the Cross Bronx Expressway, which is hilly. Attacking one small rise, the convoy slowed to 10 mph. That made it just like driving the Cross Bronx on a normal day, except that the highway was nearly empty.

“Yeah, trucker No. 2 said his truck don’t pull hills too well,” an escort driver said over the radio. “So this is all the speed we got.”

Each entrance ramp connecting to the infamous highway was closed by a police officer, who parked his car across the entry until the convoy passed. The officer would gun the engine, pass the trucks on the left, veer hard right and block the next ramp. Behind the last truck, a river of white lights stretched west for miles, vehicles caught in the convoy’s wake.

Next came the Throgs Neck Bridge toll plaza, where the padded gate dropped for each approaching truck. This produced wave after wave of invective over the radio.

“We already paid our tolls and filed our permits! That gate is supposed to stay open,” said one trucker. “If they do that again, I’m driving through the gate. I don’t care.”

Onto the bridge, near the apex, a gray Chevy Malibu zoomed up from behind and tried to pass on the right. The tail cop zoomed forward and jammed his patrol car close to the guardrail, blocking the errant car. Over the radio, more indelicate words were exchanged.

“Is it a full moon out tonight?” one escort driver said over the radio.

“Doing this job, it’s a full moon every night,” said another escort.

Slowly the convoy rolled into Queens, coiling its way through the city in a clockwise corkscrew. On Myrtle Avenue in Glendale, each truck occupied an entire block, stretching from crosswalk to crosswalk. Meanwhile the radio sparked with warnings.

“Junior, watch this guy in the Nissan Rogue,” an escort driver said. “He’s not cooperating,”

“Vinnie, you got a Jeep in the right pocket,” said an escort. “Watch him, he wants to bolt. Right pocket!”

As the tail cars passed the Jeep, the driver was arguing with a cop.

“OK! Go if you’re going to go!” the Jeep driver yelled out his open window. “Stop playing games with people!”

The most complex turn of the night came at a three-way intersection as the trucks aimed downhill on Cypress Avenue at a 20 percent grade. Their permits required a left-hand turn onto Flushing Avenue, but a regular turn would place too much weight on their outside wheels and snap their trailers in half. So each trucker executed a “Broken K-turn,” in which he pulled all the way through the intersection onto Johnson Avenue, then reversed back onto Flushing.

Even for experienced truckers, reversing such a long load proved a challenge.

“Spin the wheel to the left. No, your other left,” Andrew Bray, a driver for the High Wide & Heavy escort company, said into the radio. “Your other left! There you go.”

Getting all four trucks through took 15 minutes. Meanwhile the police cars and private escorts fanned out across the neighborhood, closing 10 different intersections to prevent cars from hitting the convoy.

The planning for this complex maneuver was done beforehand by High Wide & Heavy, which sent a driver to survey the entire route. The driver searched for any potential obstacles, including bike lanes and low-hanging stoplights.

“The city is changing fast now. They’re always putting in new bike lanes,” Bray said before the convoy left Fort Lee. “It’s getting harder and harder to get these trucks through. So you have to go out each time and resurvey the route to make sure there aren’t any new obstructions.”

The little mix-up with the K-turn notwithstanding, Bray said, oversize loads attract only the best drivers.

“I’m impressed all the time by these guys,” he said. “It’s not easy doing this.”

At 3:30 a.m., after a route of 27 miles, Eposti drove into the construction site at the foot of the Kosciuszko Bridge. He planned to sleep in his cab. In the morning he would unload the beam and drive back to Camden.

“Time to get out of Brooklyn. I’m tired of coming here,” Eposti said. “But who knows. I’ll probably be back here tonight.”