Russia and Turkey Refuse to Back Down 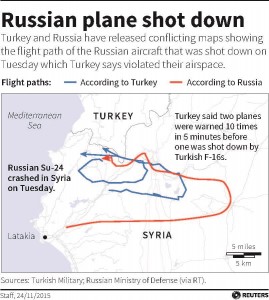 Russia sent an advanced missile system to Syria on Wednesday to protect its jets operating there and pledged its air force would keep flying missions near Turkish air space, sounding a defiant note after Turkey shot down a Russian fighter jet.

Underscoring the message, Russian forces launched a heavy bombardment against insurgent-held areas in Latakia on Wednesday, near where the jet was downed, rebels and a monitoring group said.

The United States and Europe both urged calm and continued dialogue in telephone conversations with Russian Foreign Minister Sergei Lavrov, a sign of international concern at the prospect of any escalation between the former Cold War enemies.

Turkey’s President Tayyip Erdogan made no apology, saying his nation had simply been defending its own security and the “rights of our brothers in Syria.” He made clear Turkish policy would not change.

Russian officials expressed fury over Turkey’s action and spoke of retaliatory measures that were likely to include curbing travel by Russian tourists to Turkish resorts and some restrictions on trade.

Do Not Want War

But the Russian response was carefully calibrated, indicating Moscow did not want to jeopardize its main objective in the region: to rally international support for its view on how the conflict in Syria should be resolved.

Turkey said the downed jet had encroached on Turkish air space and was warned repeatedly to change course, but Russian officials have said the plane was at no time over Turkey.

The crew ejected, and one pilot was shot dead by rebels as he parachuted to the ground. A Russian marine sent to recover the crew was also killed in an attack by rebels.

The surviving pilot was quoted by Russian agencies as saying the crew “knew the region like the back of their hand,” that they did not fly over Turkish air space, and that there were no visual or radio warnings from Turkey.

The Turkish military later released what it said was an audio recording of a warning to a Russian fighter jet before it was shot down near the Syrian border. A voice on the recording can be heard saying “change your heading” in English.

The Turkish military said it had explained the rules of engagement that led to the downing of the jet to Russian military attaches and had tried to rescue the pilots.

At a business event in Istanbul, Erdogan said Turkey had made a “huge effort” to prevent such incidents but that the limits of its patience had been tested after repeatedly warning Russia about air space incursions in recent weeks.

This article appeared in print on page 2 of the November 26th, 2015 edition of Hamodia.