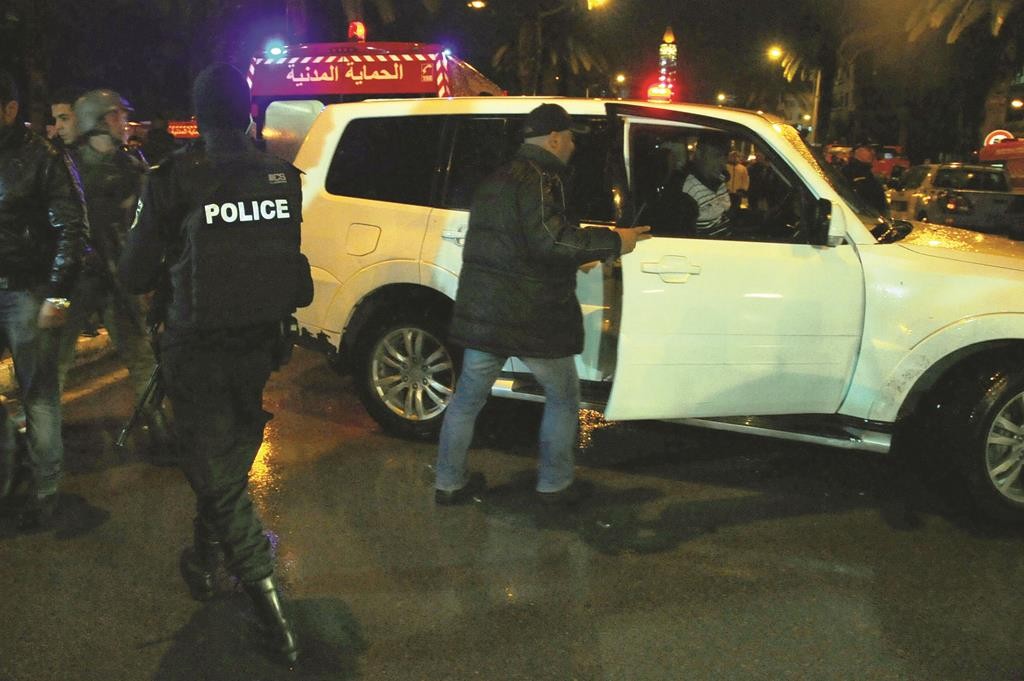 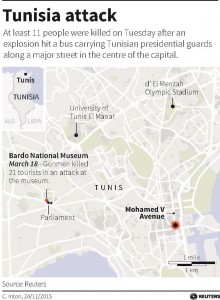 Tunisia’s president declared a 30-day state of emergency across the country and imposed an overnight curfew for the capital after an explosion Tuesday struck a bus carrying members of the presidential guard, killing at least 12 people and wounding 20 others.

The government described it as a terrorist attack. The blast on a tree-lined avenue in the heart of Tunis is a new blow to a country that is seen as a model for the region but has struggled against Islamic extremist violence. Radical gunmen staged two attacks earlier this year that killed 60 people, devastated the tourism industry and rattled this young democracy.

No one immediately claimed responsibility for the attack against the presidential guard, an elite security force that protects only the president.

President Beji Caid Essebsi, who wasn’t in the bus at the time, declared the state of emergency and curfew on the Tunis region. He convened an emergency meeting of his security council for Wednesday morning.

Speaking on national media, he said Tunisia is at “war against terrorism” and urged international cooperation against extremists who have killed hundreds around Europe and the Mideast in recent weeks, from Paris to Beirut to a Russian plane shot down over Egypt.

“I want to reassure the Tunisian people that we will vanquish terrorism,” he said.

Police fanned out throughout central Tunis after Tuesday’s explosion, and ambulances rushed to the scene, evacuating wounded and dead. Top government ministers visited the scene of the attack after it was cordoned off by police.

Interior Ministry spokesman Walid Louguini told the Associated Press that at least 12 were killed and 20 wounded in the attack.

The attack came days after authorities visibly increased the security level in the capital and deployed security forces in unusually high numbers.

Earlier this month, Tunisian authorities announced the dismantling of a cell that it said had planned attacks at police stations and hotels in the seaside city of Sousse, about 150 kilometers (95 miles) southeast of Tunis. Sousse was one of the targets of attacks earlier this year.

State Department spokesman Mark Toner, speaking in Washington, said the U.S. government was still seeking details on what happened in Tunis, but added, “We strongly condemn the attack.”

Kerry said the U.S. and Tunisia would soon begin negotiations on a major loan guarantee and were discussing expanded military cooperation, including intelligence sharing and the possible use of drones to collect information about potential threats. A U.S. military team was expected in Tunisia around late November to begin those talks.

Tunisia is the only Arab Spring country to have solidified a new democracy, but it is facing serious economic and security challenges.

Tunisia’s tourism industry has been hit especially hard this year. Shootings at a luxury beach hotel in Sousse last June killed 38 people, mostly tourists, while in March, an attack by Islamist extremists at Tunisia’s famed Bardo Museum near the capital killed 22 people.

The attack came two weeks before a group of Tunisians heads to Oslo to receive this year’s Nobel Peace Prize, awarded to the country’s National Dialogue Quartet for negotiations that rescued the country’s fledgling democracy from a constitutional crisis.

Tunisia’s influential Islamist party also denounced the explosion, and urged Tunisians to unite behind the security forces as they hunt for the perpetrators.

“Tunisia is targeted because it is a democracy and represents a model of moderate Islam,” it said.