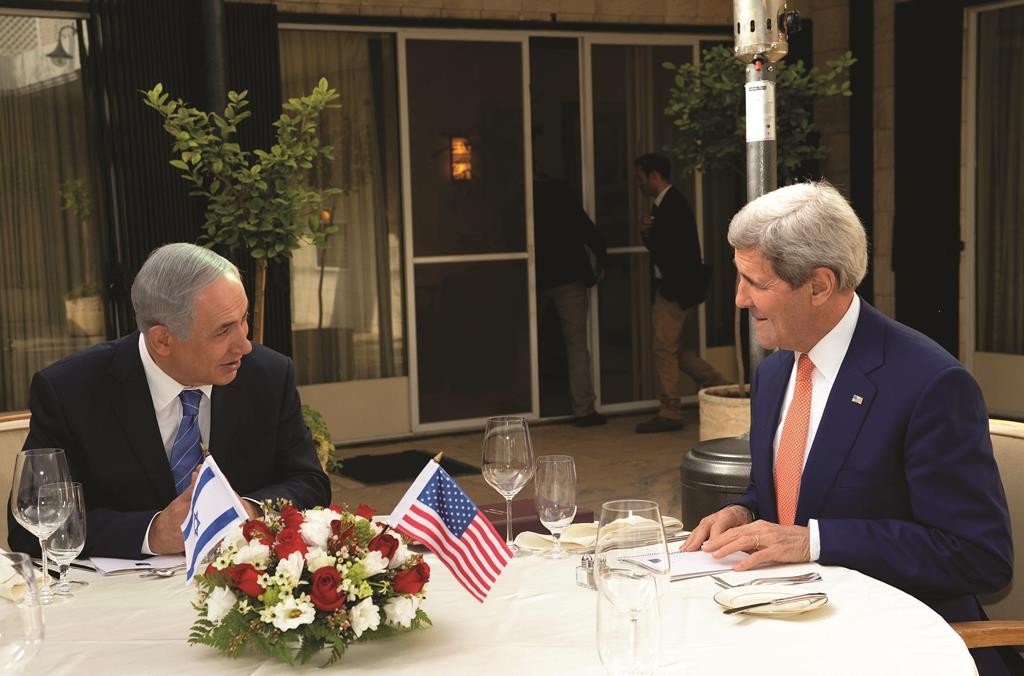 As Secretary of State John Kerry arrived for meetings with Israeli and Palestinian leaders on Tuesday to try to calm tensions, terrorist violence continued unabated.

Four people, including two IDF soldiers and a border police officer were injured when a Palestinian vehicle rammed into them near the Tapuah junction in the Shomron on Tuesday morning,

Paramedics treated one of the wounded for moderate injuries, and three others suffered light injuries. All were taken to Rabin Medical Center – Beilinson Campus in Petah Tikvah for further medical care.

Border police on the scene shot and wounded the 21-year-old Palestinian driver, who received medical attention.

Speaking to reporters along with Israeli Prime Minister Binyamin Netanyahu, Kerry said that Israel had a right and obligation to defend itself and that “no people anywhere should live with daily violence, with attacks in the streets with knives, with scissors, with cars.”

“It is very clear to us that the terrorism, these acts of terrorism which have been taking place, deserve the condemnation that they are receiving,” Kerry said.
“And today I express my complete condemnation for any act of terror that takes innocent lives and disrupts the day-to-day life of a nation.”

That “way forward” was apparently a veiled reference to a discussion held at their last meeting on November 11 and resumed on Tuesday about what Israel could do to end the violence.

The U.S. is reportedly seeking a commitment from Netanyahu to endorse certain measures to facilitate a Palestinian state. These could include a partial ceding of Area C, currently under full Israeli control, to the Palestinians.

At the November 11 meeting, Netanyahu had suggested more modest gestures that Israel would be willing to make to ease the economic and security problems facing the Palestinian Authority. Kerry was said to have been disappointed that the measures didn’t go far enough, according to Haaretz.

Senior Israeli officials said Netanyahu told Kerry that for Israel to take any more significant steps in the region, he would want America to accept Israeli construction in the Israeli population blocs in Yehudah and Shomron.

Netanyahu also made it clear to Kerry on Tuesday that the United States cannot demand any building freeze in Yehuda and Shomron, unless it is prepared to give recognition to the Israeli claims in the region.

Furthermore, Netanyahu insisted that if the Palestinians desire any help from his government they will first have to put an end to the terror attacks, Ynet reported on Tuesday.

As he said when greeting Kerry before their meeting on Tuesday, “There can be no peace when we have an onslaught of terror, not here, not anywhere else.”

Kerry himself said as much while in Abu Dhabi on Monday: “This street violence doesn’t provide any leader with a framework within which they can look their people in the eye and say, ‘There’s a reason to be sitting down and talking about this or that,’” he said. “People aren’t in the mood for concessions. They’re in the mood for being tough.”

The Prime Minister’s Office made no mention of the issue of Yehudah and Shomron, however, saying only that the two had discussed regional security matters and possible steps to end the current violence.

However, a State Department readout in English said they talked about “steps that can be taken to stop the violence in Israel, Yerushalayim and Yehudah and Shomron and improve conditions on the ground.”

The last phrase could also have been an allusion to Israeli concessions, as The Jerusalem Post said.

Meanwhile, the only measures Israel was taking on the ground were measures to protect its citizenry.

Overnight Monday, IDF soldiers set up checkpoints surrounding Chevron, Hawara and Shechem, as well as around villages adjacent to Gush Etzion, according to media reports.

Security forces were reportedly checking all Palestinian vehicles leaving the Chevron area, with hundreds of reinforcements brought in to secure the new checkpoints.

Also on Tuesday, a legislative proposal to close down mosques or any other structures which are found to be venues for incitement to violence was submitted by Jewish Home MK Bezalel Smotrich.