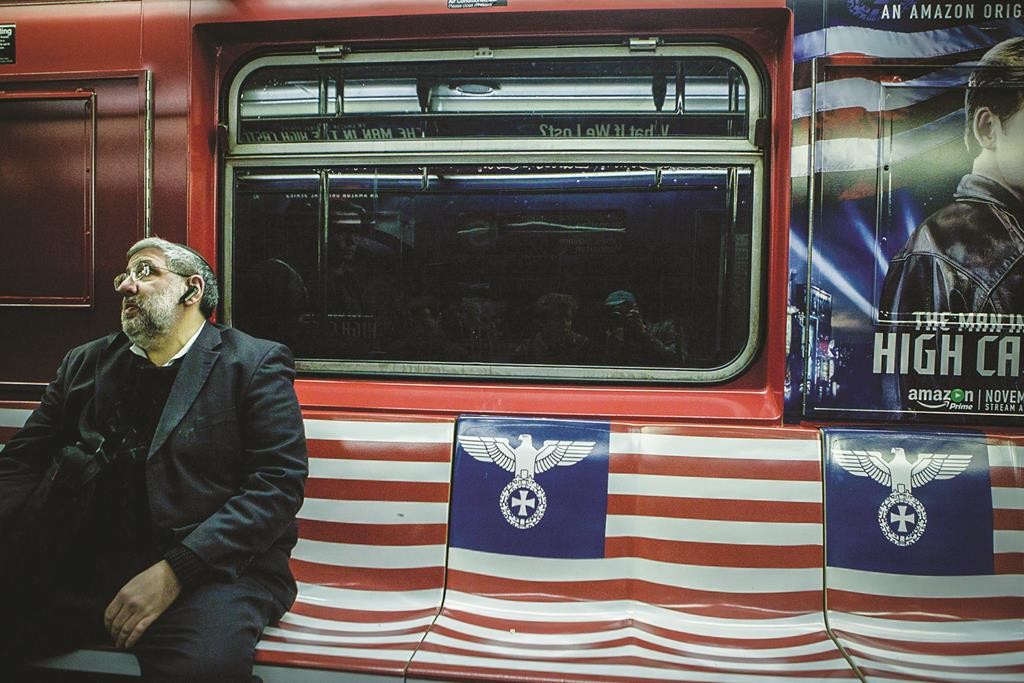 Amazon on Monday agreed to pull advertisements for a new show featuring Nazi-inspired imagery from New York City’s subway system, hours after Mayor Bill de Blasio, the ADL and others called on the company to do so.

The advertisements for “The Man in the High Castle” completely wrap the seats, walls and ceilings of one train on the heavily utilized shuttle line that connects Times Square and Grand Central Terminal in midtown Manhattan.

The show depicts an alternate reality in which Nazi Germany and Japan have divided control over the United States after winning World War Two. The ads include a version of the U.S. flag with a German eagle and Iron Cross in place of the stars, as well as a stylized flag inspired by Imperial Japan.

The shuttle train ads, as well as 260 subway station posters, had been scheduled to run until Dec. 6. An MTA official said Amazon had asked for the train seat advertisements, but not the posters, to be removed.

“Half the seats in my car had Nazi insignias inside an American flag, while the other half had the Japanese flag in a style like the World War II design,” one straphanger told Gothamist. “So I had a choice, and I chose to sit on the Nazi insignia because I really didn’t want to stare at it.”

In a statement earlier on Monday, de Blasio called on Amazon to remove the train ads, calling them “irresponsible and offensive to World War II and Holocaust survivors, their families, and countless other New Yorkers.”

Assemblyman Dov Hikind called for a boycott of Amazon products and Jeff Dinowitz, a Bronx Democrat who is Jewish, said he was “mortified” by the ads.

“While we are all used to bad decisions by the MTA, this goes beyond anything we have come to expect from them,” Dinowitz said in a statement. “The MTA could have allowed this show to be advertised without using such offensive insignias.”

The Anti-Defamation League’s New York director, Evan Bernstein, said the ads appeared insensitive since there was no context. “This ad campaign,” he added, “has a feel of exploiting things that are so sensitive to so many people.”

The MTA had said the advertisements do not violate the agency’s content-neutral guidelines, which ban political ads, such as support for Israel’s war on terror.