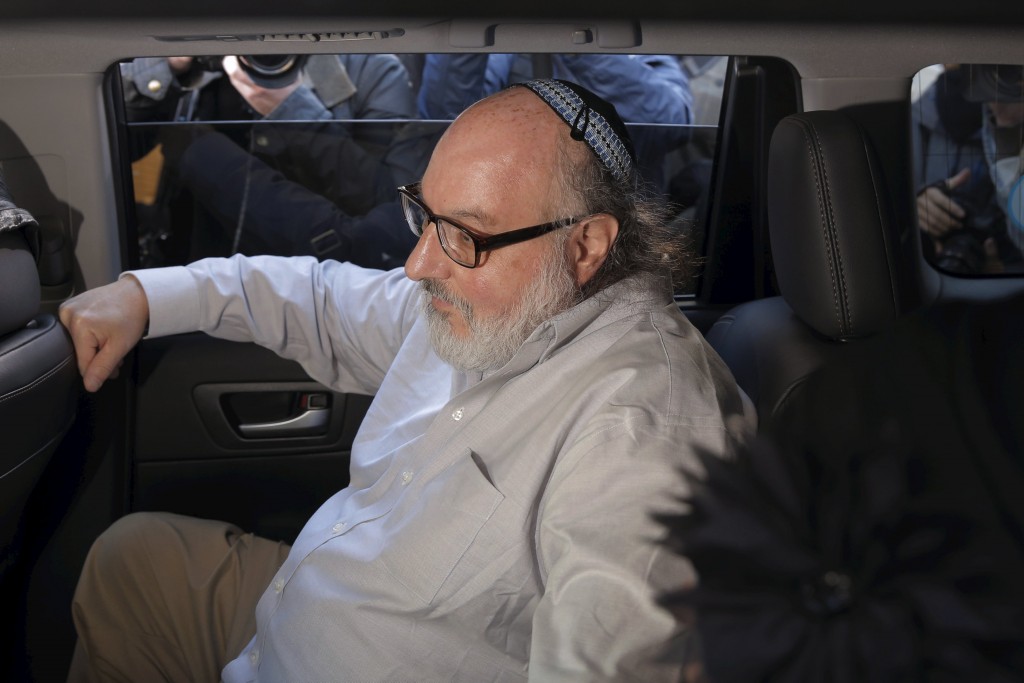 After serving an unprecedented 30 years in prison for passing classified information to an ally, Israel, Jonathan Pollard was let out on parole early Friday. He spent Shabbos in the New York area in the company of his wife, who has selflessly dedicated her life to lead the battle for his release.

Shortly after Pollard’s release, his attorneys filed a court challenge to terms of his parole that they called “onerous and oppressive” and “unnecessary, unreasonable, contrived and unlawful.”

During a visit with the Pollards on Sunday afternoon, Rabbi Pesach Lerner, who has ceaselessly championed Pollard’s cause for more than two decades, asked Jonathan about his first Shabbos out of prison.

“He described to me how, only 10 minutes before Shabbos, the Federal Parole Commission agents were fitting him with an electronic GPS bracelet like a common criminal. This made him feel embarrassed and humiliated,” Rabbi Lerner told Hamodia.

Pollard, who exhibited great mesirus nefesh to keep mitzvos in prison, showed Rabbi Lerner the beautiful new tallis and tefillin bag containing a new set of tefillin and a new tallis his wife bought him in honor of his release.

He said that he spent Shabbos davening and making brachos, including Shehecheyanu on fruits and vegetables he hasn’t eaten in years, such as a fresh pineapple, and foods like hummus and techinah.

“He was catching up and enjoying being appreciative for the simple things in life,” Rabbi Lerner said, “something that should make all of us stop to thank Hakadosh Baruch Hu for what we have — for there are others who don’t have it.”

In their court filing, Pollard’s extraordinarily devoted pro-bono attorneys, Jacques Semmelman and Eliot Lauer, asked the United States District Court for the Southern District of New York to vacate the conditions that include a requirement that Mr. Pollard wear an electronic bracelet at all times for GPS tracking of his whereabouts, as well as the unfettered monitoring and inspection of Mr. Pollard’s computers as well as those of any employer who chooses to hire him.

According to the Parole Commission, the putative justification for these conditions is to ensure that Mr. Pollard does not commit any further crimes, specifically the disclosure of classified information.

“The notion that, having fought for and finally obtained his release after serving 30 years in prison, Mr. Pollard will now disclose stale, 30-year-old information to anyone, is preposterous,” his attorneys said in a statement on Friday. “Apart from the fact that the information is useless, disclosing it will result in Mr. Pollard’s swift return to prison to serve out his life sentence.”

Attached to the legal complaint is a declaration from Robert “Bud” McFarlane, who served as U.S. national security advisor under President Ronald Reagan, and who was in office at the time of Mr. Pollard’s arrest in 1985.

The lawyers also pointed out that the Parole Commission has already determined that there is no reasonable probability that Mr. Pollard will engage in further criminal activity.

“It is improper and disingenuous for the Parole Commission to impose these onerous conditions using the excuse of preventing further criminal activity,” they said.

“Even more disturbingly, the conditions are illegal, as they violate a federal statute, federal regulations and the Constitution, all of which strictly constrain the imposition of conditions on parolees,” the attorneys stressed.

The monitoring and tracking conditions imposed on Mr. Pollard are most commonly imposed on dangerous felons who must be closely supervised at all times for the protection of their victims.

“There is no basis whatsoever to treat Mr. Pollard in that manner and doing so is vindictive and cruel, as well as unlawful,” Lauer and Semmelman added.

“He has to wear a GPS monitoring bracelet 24 hours a day, and this electronic bracelet has to be charged for two hours every day. He is under house arrest from 7:00 p.m. to 7:00 a.m., and can only travel within an area in close proximity to his apartment. He is prohibited from even traveling to another borough within New York City.

“Why are they treating him like he is a danger to society?” Rabbi Lerner wants to know. “What possible rationale is there for house arrest each night starting at 7:00 p.m.?”

Pollard pled guilty to a single count of passing classified information to an ally as part of a plea deal that was supposed to ensure that he wouldn’t be sentenced to life in prison. But after then-Defense Secretary Caspar Weinberger, who, according to his deputy at the time, was acting out of an “almost visceral dislike of Israel,” submitted a classified memorandum to the sentencing judge, Pollard was sentenced to life behind bars. He is the only individual in American history to receive such a punishment for such a crime; the median punishment for this crime is between two and four years in prison.

In addition to other serious medical conditions, Pollard suffers from weeping edema (a condition that includes chronic swelling in his legs and ankles), is required to wear orthopedic stockings, and suffers from severe diabetes. Because of these conditions, his doctors said that it would be dangerous for Mr. Pollard to have any restraint placed on his ankle or leg.

After much discussion, doctors’ notes and legal opinions, the Federal Parole Commission agents agreed to put the GPS bracelet on his wrist.

In their legal challenge, the attorneys pointed out that the computer-monitoring condition also requires any employer to consent to unannounced searches of its computer equipment and the installation of computer monitoring software and hardware on its devices, thereby waiving its Fourth Amendment rights.

“Jonathan is a bright individual who now has no opportunity for a job,” says Rabbi Lerner. “He had a job at an investment firm as a research analyst. The job offer he had has been retracted because the parole conditions require that any computer he uses be open for inspection at any time by the Federal Parole Commission and any other government agency. And that doesn’t mean just his computer, but every computer in that company. No employer will agree to that.”

“We will need to really research his job opportunities. Jonathan is a very bright and creative individual. He is a graduate of a top-notch Ivy League university. In prison, he read thousands of books, on Jewish history, the history of Israel, and alternate energy systems. He has many ideas that he wants to research.”

The authorities warned Pollard in no uncertain terms that the minutest violation or breach of his parole will suffice to return him to prison for another 15 years.

“He was specifically told that there ‘is no room for error — there will be zero tolerance,” Rabbi Lerner said. “He is living with a dangling sword over his head, not knowing if, what, who… How can someone lead a life this way? He can’t work, he is living with a constant fear of re-arrest for things he isn’t even aware of…”

When asked about Pollard’s plans for the future, Rabbi Lerner responded that currently Jonathan’s priorities include “getting acclimated to the normal day to day things we all do, that are new to him. Things like living in his own apartment with his wife, creating his own schedule, being able to daven at his own pace, eating a normal meal, going shopping. Jonathan told me that when they went food shopping on Friday at the grocery store around the corner from his apartment, he was amazed at the number of food items on the shelf, and the variety of each item.

“They went shopping for basic clothing on Monday; remember, he only has the few items that Esther bought for him last week, before he was released from prison. He was dizzy from the styles and options for just a pair of pants and a few shirts.”

Pollard is also dealing with his health issues.

“He is beginning to see different doctors for his many ailments,” Rabbi Lerner says. “B’ezras Hashem, we will be able to deal with them one at a time, using many specialists in many fields. Jonathan still needs our tefillos.

“He will also be working very closely with his pro-bono attorneys, Eliot Lauer and Jacques Semmelman, who have worked tirelessly on Jonathan’s behalf, to legally challenge these unjust parole conditions, which really prevent Jonathan from leading a normal life,” Rabbi Lerner added.

Jonathan’s wife, Mrs. Esther Pollard, will be at his side, assisting her husband in everything he needs to do.

“Esther was a sought-after kindergarten teacher in her earlier years, but she has been moser nefesh for almost 25 years to give Jonathan the chizuk he needed, to represent him in all areas, to garner support for his cause and ultimately his freedom,” Rabbi Lerner said. “Now, baruch Hashem, she will continue that role of ezer k’negdo, as his wife, confidant, and pillar of support.”

Rabbi Lerner, who has forged a very close relationship with Pollard during his long years of askanus on his behalf, sees Jonathan as a source of inspiration.

“I was humbled to watch Jonathan daven Minchah on Sunday afternoon. You had to witness the davening of this Yid davening to Hashem, saying every word slowly and carefully with kavanah. May Hashem hear his tefillos, and the tefillos of so many others who are davening on his behalf.”