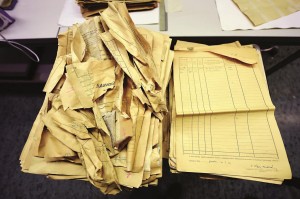 A Hungarian couple renovating their Budapest apartment in August unearthed a trove of over 6,000 documents from a 1944 census that was a precursor to the liquidation of Budapest’s Jews, reported The Guardian.

After a worker detected paper inside a wall, the couple, Gabor and Brigitte Berdefy, removed 135 pounds of papers and gave them to the Budapest city archives.

“The content and scale of the finding is unprecedented,” said Istvan Kenyeres, head of the archives. “It helps to fill a huge gap in the history of the Holocaust in Budapest.”

Researchers have been ironing and studying the papers for the past several months.

The census, conducted in Budapest in May of 1944, was used to identify homes to be used as holding locations for Jews before they were to be moved to a planned walled ghetto.

The forms found in August have the names of each building’s inhabitants and whether or not they are Jewish, reported The Guardian.

“Jewish people filled in the forms honestly; they refused to believe where this might end up,” said Kenyeres.

Shortly after the census, approximately 200,000 Jews were moved into 2,000 selected buildings, with the Jewish yellow star painted on the doors.

In late 1944 the Jews were moved into the ghetto, where many died of starvation or were killed. The Russian army’s arrival in Budapest in January 1945 meant that most Jews from that city survived.

In all, around a half-million Hungarian Jews were killed in the Holocaust, most in the Auschwitz death camp.

This article appeared in print on page 18 of the November 25th, 2015 edition of Hamodia.