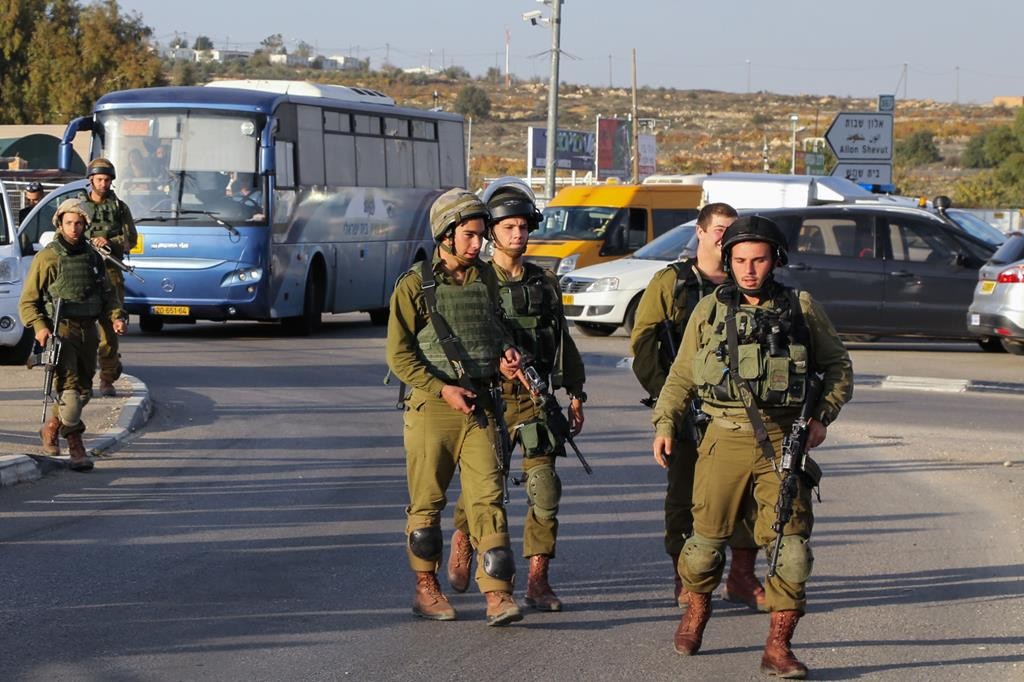 The two-month wave of Palestinian terror attacks claimed its 19th Israeli murder victim on Sunday, Hadar Buchris, Hy”d, 21, from Tzfas, who was stabbed to death at the Etzion Junction.

She was waiting at a bus stop in the junction when a man later identified as Atzam Tuabata, 34, from Beit Fajar near Beit Lechem, attacked and killed her. IDF forces rushed to the scene and shot and killed Tuabata. According to the Shin Bet (Israel Security Agency), he did not have a criminal record.

Magen David Adom paramedic Zaki Yahav said that when he arrived at the scene he saw “on the sidewalk near the bus station a young woman in her twenties, who lay unconscious with stab wounds.”

“Citizens at the site began to provide first aid and they were trying to stop the bleeding. We quickly moved her into the ambulance and we evacuated her to hospital on a respirator,” Yahav said.

By the time she arrived at Shaare Zedek Medical Center in Yerushalayim, it was too late for doctors to revive her, and she was soon after pronounced dead.

Three people were killed in a terror attack on Thursday, just around the corner from the same bus stop, and the IDF has been taking measures to increase security in the area.

It was the most serious but not the only terrorist attack on Sunday.

In the morning, a Palestinian taxi driver rammed into an Israeli car and then stabbed one of its passengers, wounding the man lightly in the hand, near Ma’aleh Adumim, a short drive from the capital.

Rabbi Shmuel Shapira, head of the Zvia Eilat yeshivah high school, and staff members were in the car.

“We were en route to Yerushalayin; a yellow Arab taxi went into us,” Rabbi Shapira told Arutz Sheva. “We made a few turns and the car hit us again. As we exited the car to see what was going on, the taxi driver ran toward us with a knife.”

“One of the passengers in our car had a gun and managed to shoot him. I was close to the terrorist. I was able to get back into the driver’s seat and lock the vehicle. Then, he was hit.”

Rabbi Shapira suffered light injuries to his left arm and was taken to Hadassah Medical Center for treatment.

The incident took place on Route 1, by the Mishor Adumim junction about 10:15 a.m.

Less than an hour before that, a woman terrorist who attempted a stabbing at a bus stop and a hitch-hiking spot, near the Hawara checkpoint outside Shechem, was killed by citizens and security forces.

Former Shomron Council head Gershon Mesika ran the terrorist down with his car.

He had stopped at the bus stop to pick up hitch-hikers.

“I heard someone yelling, “terrorist, terrorist!” he later explained. “I looked up. I saw someone large running after a young woman. I didn’t think twice, I turned the steering wheel to the right, I pressed my foot onto the gas, and ran her over,” he said.

“She fell over and then security forces shot her,” he said.

Avigail Shomriyah, 21, told The Jerusalem Post that she was waiting for a ride when the terrorist suddenly appeared:

“I turned around and saw a terrorist with a large knife and murderous looking eyes. It was a very large knife. I ran in the direction of the soldiers, she ran after me. Then Gershon ran her over. Then they shot her,” Shomriyah said.

“I must say that we are showing such awareness, with considerable resourcefulness and courage, and this is deserving of all praise. We are still fighting and will continue to do so,” he said at his weekly Cabinet meeting.

On Motzoei Shabbos, a Palestinian attacker stabbed four people, including a 13-year-old girl, in the southern city of Kiryat Gat.

Following a manhunt of several hours, police caught up with the 18-year-old Palestinian hiding in a house near the scene of the crime.

Kiryat Gat resident Ami Lahiani was home at the time, but was unaware of the intruder’s presence.

“The terrorist hid in the back part of my storage unit,” he said. “There was silence as I ate. I turned on a light by the area in which he was hiding. I’m sure he knew that I was there because light shone into my dining area — he must’ve known that someone was home. Even though we were separated by a barred window, he saw that I was there. I was very tired and went up to sleep. But my phone rang and my brother left a message. He said my neighbor told him about the chaos surrounding my house,” Lahiani continued.

“It was then that I started hearing noise,” he said.

He got out of bed and went downstairs. “Is anyone there?” he called out. “I heard windows being shattered, so I walked downstairs. And that was when I found 20 police officers. They said the terrorist was at loose in my home, so they led me outside so that they could scan the area and keep looking for him.”

Police found and apprehended him.

“They found a knife and an identification card on his body. His coat and cigarettes were drenched in blood. He was saying in Hebrew, ‘it’s not me, it’s not me, what do you want from me?’ in an Arabic accent.”

The Shin Bet named the attacker as Muhammad Tarda, 18, with no prior criminal record.

The four civilians he stabbed were reported in moderate to serious condition.

The attacks came two days before Secretary of State John Kerry was scheduled to arrive in an attempt to calm tensions in the region. It will mark his first visit with Israeli and Palestinian leaders here since the collapse of peace talks over a year ago.

Residents of nearby Alon Shvut marked the site where three Israelis were murdered last Thursday in terror attacks, around the corner from another murder on Sunday.