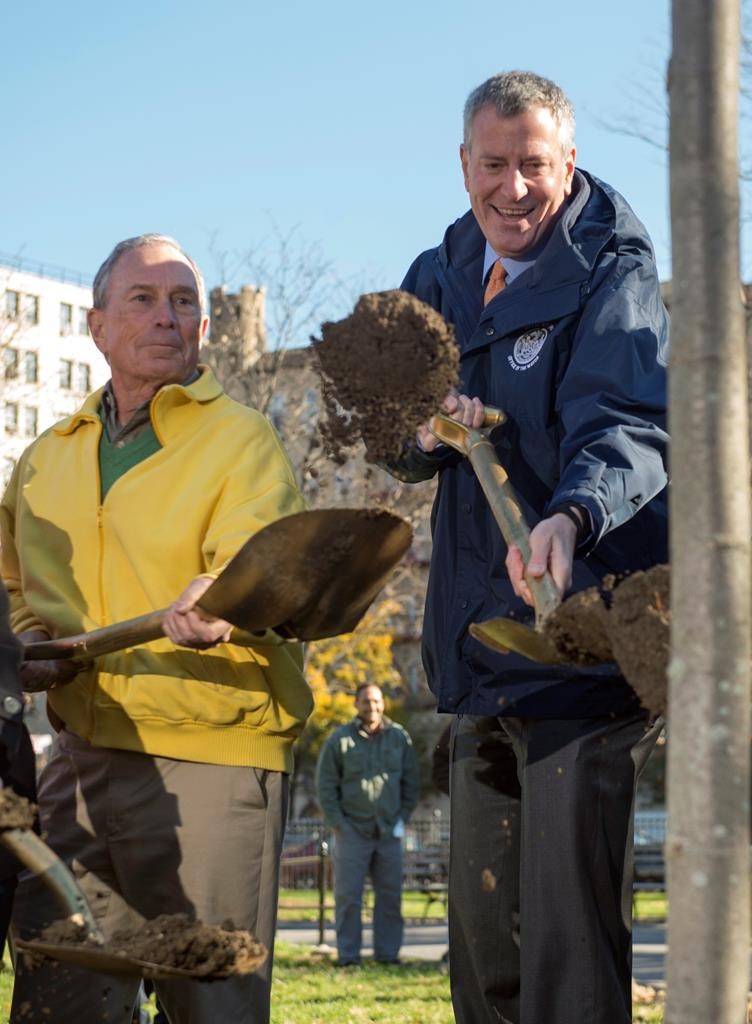 Mayor Bill de Blasio and his predecessor, Michael Bloomberg, made a rare joint public appearance on Friday, ostensibly to plant the one millionth tree of the Million Trees NYC program, a quality-of-life initiative started by Bloomberg and continued by his successor.

The photo op, which drew intense media coverage, was also the latest move in a carefully considered effort by de Blasio’s team to improve his standing with whites by repairing relations with Bloomberg. The mayor had fiercely criticized his predecessor during his 2013 campaign who yet is still quite popular among many New Yorkers and could prove to be a powerful, if somewhat unlikely, future political ally.

The mood at the tree-planting ceremony in a Bronx park matched the sunny weather, as de Blasio repeatedly praised his predecessor for starting the program.

“The visionary was Michael Bloomberg and we’re here to give him a lot of credit for what he saw,” de Blasio said. “He has a lot to be proud of today.

“And, you know, Michael Bloomberg had an extraordinarily successful career in business and did a lot of great things for the city as mayor,” de Blasio continued, before pivoting to praise Bloomberg’s speech earlier this month at the annual black-tie Al Smith dinner, in which the former mayor roasted several politicians including his successor.

Bloomberg then good-naturedly cut him off.

“I’m not sure the governor thought that but …,” Bloomberg said, chuckling.

Gov. Andrew Cuomo, in some way, actually helped bring the two mayors together.

De Blasio has waged a public fight with the governor, a fellow Democrat, over much of his agenda and has found a sympathetic ear in Bloomberg, who also struggled at times with Cuomo. While de Blasio’s conflict with Albany shows no sign of abating, aides to the mayor believe it made sense to declare a truce with Bloomberg instead of trying to fight wars on two fronts.

Aides to the mayor have suggested that they hope Bloomberg, who remains popular with Senate Republicans who largely dislike de Blasio, may help them make their case to Albany next year that mayoral control of the school system should be extended.

Bloomberg, who has returned to running his media company, seemed to enjoy the trip down memory lane during the tree-planting ceremony, which was supposed to be held last month but was postponed after the killing of a NYPD officer (the millionth tree was actually planted then; on Friday, the two mayors planted number 1,017,634).