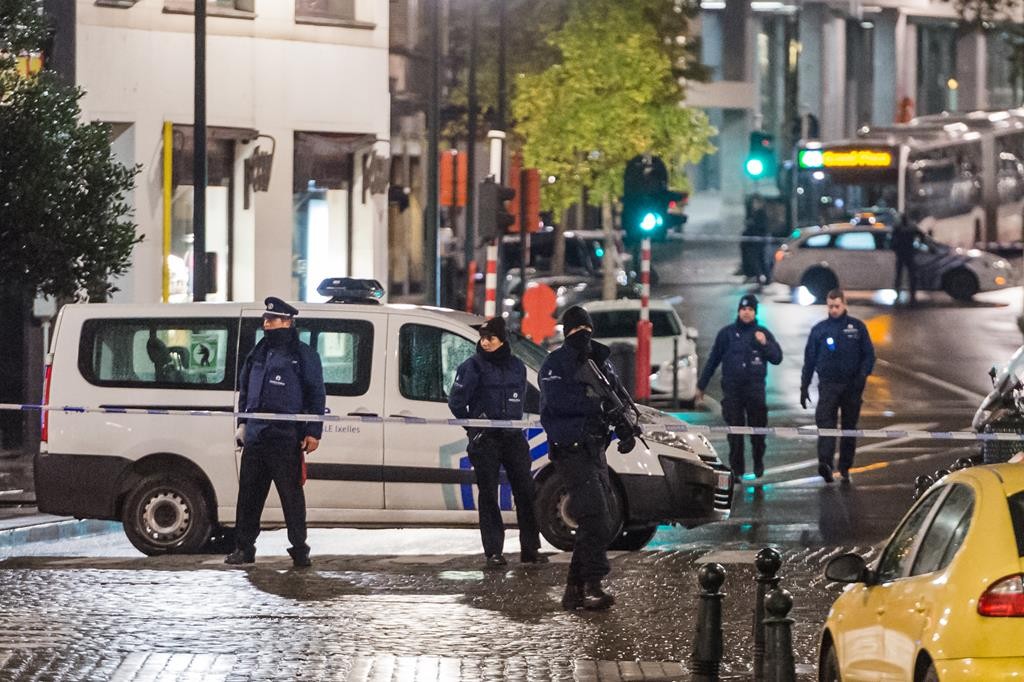 Belgian police arrested 16 people during operations following the Nov. 13 Paris attacks but did not find Salah Abdeslam, the Brussels man who is suspected of playing a key role in France, the public prosecutor said early on Monday.

During one of 19 raids mounted across the capital, Brussels, police fired on a vehicle but it was not clear if those inside were connected to those being sought, he told a brief news conference. Three houses were also searched in Charleroi, south of Brussels.

“We can stress that no weapons or explosives were found. Salah Abdeslam was not found during the raids,” prosecutor Eric Van Der Sypt told a news conference.

With hundreds of troops patrolling Brussels for a second day and authorities hunting suspected terrorists, the Belgian government chose Sunday to keep the capital on the highest state of alert into the start of the workweek to prevent a Paris-style attack.

Citing a “serious and imminent” threat, Prime Minister Charles Michel announced that schools and universities in Brussels will be closed Monday, with the subway remaining shut down, preventing a return to normal in the city that is also home to the European Union’s main institutions.

“We fear an attack like in Paris, with several individuals, perhaps in several places,” Michel said after chairing a meeting of Belgium’s National Security Council.

While Brussels was kept on the highest of four alert levels, the rest of the country remains on a Level 3 alert, meaning an attack is “possible and likely.”

Meanwhile, Western leaders stepped up the rhetoric against the Islamic State group, which has claimed responsibility for the attacks in Paris that killed 130 people and wounded hundreds more; the suicide bombings in Beirut that killed 43 people and injured more than 200; and the downing of the Russian jetliner carrying 224 people in Egypt’s Sinai Peninsula. All happened within the past month.

“We will not accept the idea that terrorist assaults on restaurants and theaters and hotels are the new normal, or that we are powerless to stop them,” President Barack Obama said in Kuala Lumpur, Malaysia.

The decision to put Brussels on the highest alert came early Saturday as authorities frantically searched for Salah Abdeslam, who is believed to have played a key role in the Nov. 13 attacks in France. He is known to have crossed into Belgium the day after the attacks.

Several of the Paris attackers had lived in Brussels, including Abdelhamid Abaaoud, the plot’s orchestrator who was killed Wednesday in a standoff with French police.

Meanwhile, France has intensified its aerial bombing in Syria and Le Drian said the aircraft carrier Charles de Gaulle, which has been sent to the Mediterranean to help combat Islamic State terrorists in Syria, will be “operational” from Monday and “ready to act.”

Also Monday, French President Francois Hollande is scheduled to meet in Paris with British Prime Minister David Cameron and will travel to Washington and Moscow later in the week to push for a stronger international coalition against Islamic State. Cameron is expected to outline his plan for combating the terrorists as he seeks parliamentary approval to join France, the U.S. and Russia in striking the group’s strongholds in Syria.

France has extended a state of emergency, which allows police raids, searches and house arrest without permission from a judge, for three months. On Saturday, it also extended a ban on demonstrations and other gatherings through Nov. 30, when a U.N. climate conference with more than 100 heads of state is scheduled to start.