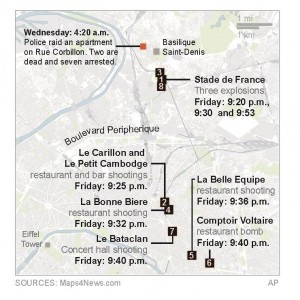 The suspected ringleader of the Paris attacks was killed Wednesday in a massive predawn raid by French police commandos, two senior European officials said, after investigators followed leads that the fugitive terrorist was holed up north of the French capital and could be plotting another wave of violence.

More than 100 police officers and soldiers stormed an apartment building in the suburb of Saint-Denis during a seven-hour siege that left at least two dead, including the suspected overseer of the Paris bloodshed, Abdelhamid Abaaoud, officials said. Abaaoud, a Belgian terrorist, had once boasted that he could slip easily between Europe and strongholds of the Islamic State terrorist group in Syria.

Paris prosecutor François Molins, speaking to reporters hours after the siege, said he could not provide the identities of the people killed at the scene. A French security official declined to confirm or deny that Abaaoud had died.

But two senior European officials, speaking on condition of anonymity to discuss intelligence matters, said they received confirmation from the French that Abaaoud was slain in the raid.

It was not immediately clear how Abaaoud died — whether in police gunfire, by his own hand or in a suicide blast triggered by a woman in the apartment.

After the raid, forsenics experts combed through the aftermath — blown-out windows, floors collapsed by explosions — presumably seeking DNA and other evidence.

The raid on the apartment building appeared to be linked in part to plans to stage a follow-up terrorist attack in the La Defense business district, about 10 miles away, two police officials and an investigator close to the investigation said. They spoke on the condition of anonymity because they were not authorized to brief media.

Five days after the worst violence on French soil since World War II, European nations remained on edge, enhancing vigilance against possible attacks by Islamist terrorists who have promised to bring the brutal tactics employed in Iraq and Syria to the West.

President François Hollande, seeking to reassure French citizens unnerved by the bloodshed on the streets of Paris, said the attacks would not alter the French way of life.

He renewed his case for an extension to a state of emergency decreed after the attacks and for changes to the constitution that he said would make France safer.

The siege appeared to have been aided by another potential breakthrough in the probe: the discovery of a mobile phone in a garbage can near the Bataclan concert hall, the site of one of Friday’s assaults.

The phone’s data contained a map of the music venue, French media reported, along with a chilling text message sent shortly after the first gunmen entered: “Let’s go, we’re starting.”

The information on the phone opened fresh leads, including to an apartment southeast of Paris in Alfortville, according to Mediapart, a French news outlet.

French officials have cast a wide net in the hunt for suspects in Friday’s attacks. Across France, 118 additional raids were conducted overnight on Tuesday, yielding at least 25 arrests. That brought to 414 the number of raids launched throughout France since Friday, the Interior Ministry said.

Meanwhile, France continued airstrikes Tuesday night against Islamic State targets in Syria, a significant escalation of its military participation in the U.S.-led campaign against the Islamic State. Also on Wednesday, France’s only aircraft carrier, the Charles de Gaulle, embarked from Toulon port en route to the eastern Mediterranean, where its fighter jets will take part in operations against the militant group.

This article appeared in print on page 1 of the November 19th, 2015 edition of Hamodia.