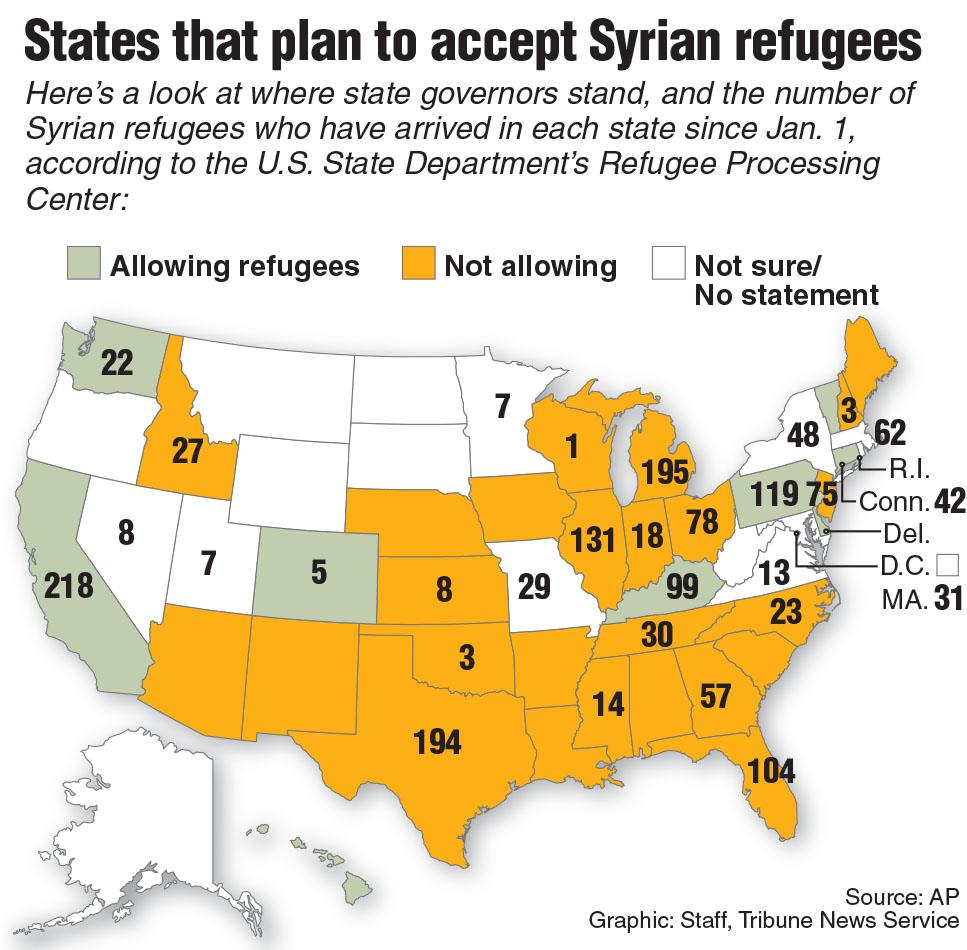 Republicans urged an immediate closure of America’s borders to Syrian refugees Tuesday, drawing angry denunciations from some Democrats and igniting an emotional debate about U.S. values in the wake of the deadly Paris terror attacks.

“Pause” was the word used by both new House Speaker Paul Ryan of Wisconsin and Senate Majority Leader Mitch McConnell of Kentucky, urging at least a temporary halt in the resettlement of Syrians and disputing Obama administration claims that the small numbers making their way here so far are being thoroughly investigated.

The administration showed no sign of backing off its plans to bring an additional 10,000 Syrian refugees to the U.S. and mounted a hasty defense of its vetting process, which Attorney General Loretta Lynch assured Congress is “robust.”

Chuck Schumer of New York, the third-ranking Senate Democrat, broke with most in his party and told reporters that a pause in accepting Syrian refugees “may be necessary.”

Schumer’s comment underscored what could become an increasingly uncomfortable position for Democrats as worried voters seek assurances that Friday’s carnage in the streets of Paris will not be repeated here. Some lawmakers pointed to indications that one of the Islamic State attackers carried a Syrian passport and may have arrived in France among waves of desperate refugees. Yet Germany’s top security official said the passport might have been a fake intended to stoke fears.

Amid the uncertainty, Ryan confronted a tense and unexpected foreign policy test in his third week on the job. Ahead of a classified briefing Tuesday evening for lawmakers, he assembled a task force of committee chairmen to bring refugee legislation to the floor as soon as this week. Lawmakers were eager to take some action before breaking for Thanksgiving, though it remained unclear exactly what that would be.

“This is a moment where it’s better to be safe than to be sorry,” he said. “So we think the prudent, the responsible thing is to take a pause in this particular aspect of this refugee program in order to verify that terrorists are not trying to infiltrate the refugee population.”

McConnell echoed that call within hours, remarking: “It’s pretty clear how the American people feel about this.”

Donald Trump accused the administration of sending refugees primarily to Republican-led states, and more governors announced their objections to receiving any refugees from the civil war in Syria.

The U.S. has admitted roughly 2,500 Syrians since the civil war erupted in that country in the spring of 2011, senior officials from the State Department, Homeland Security Department and U.S. intelligence community said on a telephone call with journalists Tuesday. Of that number, about half are children. About 2 percent are single men of combat age. The overall pool is almost evenly split between males and females.