World How a Night of Horror Washed Paris in Blood
World 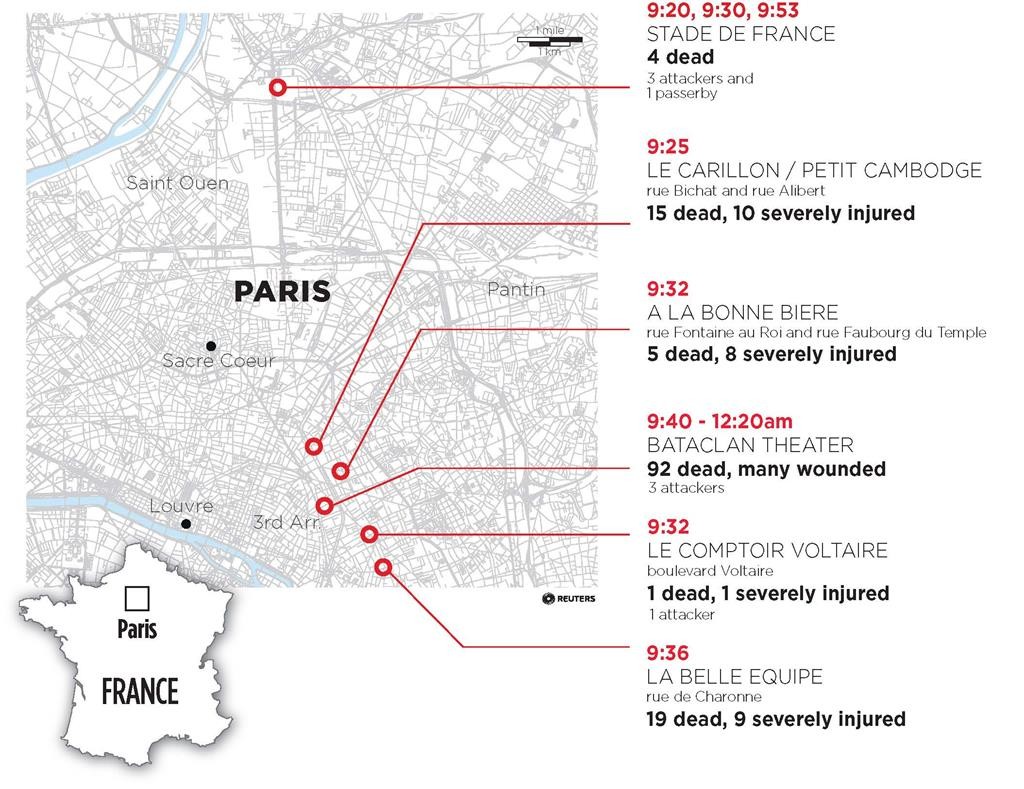 The terror attackers on Friday night worked in three synchronized teams, wearing matching suicide vests and carrying the same weapons. In an excruciating half-hour, they unleashed their terror.

One suicide bombing after another at the national stadium, sprays of gunfire in the crowded restaurants and streets of central Paris, and finally a hostage standoff that drenched a concert hall with the blood of dozens.

Here is how it happened, based on accounts from French authorities and witnesses.

Kickoff of the France-Germany soccer match at the French national stadium and the beginning of a concert at the Bataclan concert hall. Both packed with fans, the match includes French President Francois Hollande among spectators.

A man with a Syrian passport and an explosives vest blows himself up at Gate D of the stadium, killing himself and a bystander. The match continues.

Gunmen in a black rented Seat Leon open fire on a bar and a restaurant — Le Carillon and Petit Cambodge — killing 15 people and leaving more than 100 shell casings of different calibers, including 7.62 mm, strewn at the scene. When the shooting starts, Emilio Macchia, an Italian book designer visiting for a publishing fair, starts to run from the Carillon. “A girl opened the door to her building and let us in. We hid inside with 10 or 15 other people. I still remember one girl, she said she’d seen one huge man shooting. That’s when I realized it was a terror attack.”

A second suicide bomber approaches Gate H of the stadium, blowing himself up but claiming no other victims.

Gunmen in a rented Seat Leon open fire on a La Bonne Biere bar on La Fontaine au Roi street, just around the corner from the restaurant shootings. Five people are killed. About a hundred shells are left on the ground of different caliber, including again 7.62 mm.

Hollande presses the cellphone to his ear inside the glass-lined booth overlooking the soccer field, absorbing the horror tearing into the French capital for the second time this year. The digital clock above him ticks away the seconds in red: 21:36:49.

Just then, gunmen in a black Seat car attack Charonne street, killing 19 people. Again, about 100 shell casings are left on the ground, including 7.62 mm.

A black Volkswagen Polo parks outside the Bataclan concert hall on Boulevard Voltaire, and three people emerge, opening fire as they enter the packed venue. The band is several songs into their show and playing to a full house. The attackers enter, apparently unnoticed over the loud music, armed with automatic weapons, their bodies wired with explosives.

Among the hostage-takers is a Frenchman, one week shy of his 30th birthday, convicted eight times between 2004 and 2010 for minor crimes and flagged for ties to Islamic radicals. In a brief communication with security forces, the hostage-takers invoke Syria and Iraq. As shots ring out, people escape from side doors of the venue, some dragging bodies with them. One woman clings to a second-story window, trying to get out of the line of fire.

At that moment, a suicide bomber detonates his vest further down Boulevard Voltaire. The bomber is the only victim.

A suicide attacker about 400 meters from the stadium detonates his vest, identical to those of the others with TATP explosives. No one else is killed.

Security forces storm the Bataclan. Two of the terrorists detonate their suicide vests; a third is shot by law enforcement and the vest explodes.