Republicans Seek to Shut Door on Syrian Refugees After Paris 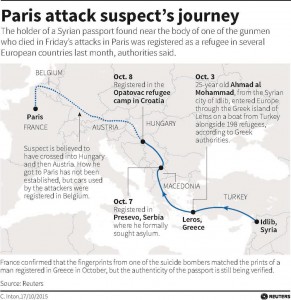 More than a dozen state governors refused on Monday to accept Syrian refugees after the Paris attacks, part of a mounting Republican backlash against the Obama administration’s plan to accept thousands more immigrants from the war-torn country.

Leading Republican presidential candidates called on President Barack Obama to suspend the plan to accept 10,000 Syrian refugees in the coming year and some Republican lawmakers began moves in Congress to try to defund the policy.

The State Department said the administration would stand by its plan, reiterating that the refugees would be subject to stringent security checks, and Obama said that the terrorism problem should not be equated with the refugee crisis.

But Republican leaders said it was too risky to allow a further influx of refugees after Friday’s attacks by the Syria-based Islamic State group that killed 129 people.

A Syrian passport found near the body of one of the attackers showed that its holder passed through Greece in October, raising concern that the attackers had entered Europe amid the wave of refugees fleeing that country’s four-year civil war.

This article appeared in print on page 2 of the November 17th, 2015 edition of Hamodia.