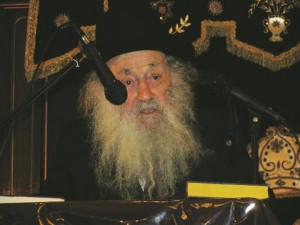 One of the last remaining talmidim of the Chofetz Chaim, Harav Yechiel Nisselbaum, z”l, was niftar Monday, 4 Kislev, at age 103.

Reb Yechiel was born in the town of Maltch in 1913. His father, Reb Dov Nisselbaum, z”l, was a businessman and a highly respected member of the community.

In 1930, having already studied in several other yeshivos, young Yechiel traveled to Radin to learn in the famed yeshivah there under Harav Mendel Zaks, zt”l. There he remained for many years, absorbing its unique approach to learning and atmosphere of yiras Shamayim. Although the Chofetz Chaim was very old and weak by the time Reb Yechiel arrived in the town, through his great determination the niftar still merited to glean a great deal from the tzaddik.

During these last years, the Chofetz Chaim very rarely left his home, but bachurim, Reb Yechiel among them, regularly came to form his minyan and hear his weekly mussar talks. Rav Nisselbaum recounted that the substance of these shmuessen was rarely directed at the talmidim in attendance and mostly focused on the problems and needs of Klal Yisrael.

On one occasion, while davening in the Chofetz Chaim’s home, Rav Nisselbaum merited helping the aged and frail tzaddik to don his tallis and tefillin. He vividly described the yiras hakavod that he experienced in his presence, and his hesitation to touch the tzaddik’s holy body. In thanks, the Chofetz Chaim blessed the young bachur, saying, “Zolt ihr zayn gezunt — May you be well.” More than eight decades after the incident, Rav Nisselbaum still attributed his good health and long life to the brachah.

During the war years, Rav Nisselbaum found himself exiled in the frozen expanse of Siberia; he was ultimately transferred to Soviet territories in Central Asia. Following the war he traveled to France, where he studied together with other yeshivah students who had survived the Holocaust. He eventually moved to America, where he married and raised his family.

Throughout his many long years, Rav Nisselbaum’s deep connection to his great rebbi remained alive within him. He often recounted stories and teachings he had heard and pored over the plethora of sefarim that the tzaddik left to Klal Yisrael. He often shared his clear memories of the Chofetz Chaim with rapt audiences.

Reflecting on the power of the brachah he received from the tzaddik, Rav Nisselbaum told Hamodia in a recent interview: “I went through five years in Siberia, the Germans, wars … [At the time] I thought Hashem will still help me, I will be helped. So it was. [After all my tribulations] I arrived in America, I got married, and Hashem helped me that I built a family l’shem ul’siferes.”

This article appeared in print on page 1 of the November 17th, 2015 edition of Hamodia.