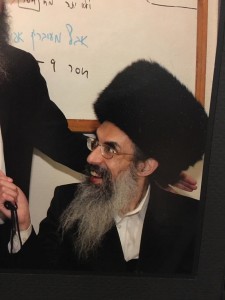 The Gerrer kehillah mourned the petirah of Reb Yaakov (Yankel) Eilenberg, z”l, who was niftar Thursday night, Rosh Chodesh Kislev, at age 63. He is remembered as a talmid chacham who quietly performed countless acts of chessed.

Reb Yankel was born in 1953 in Furth, Germany, where his parents, Reb Avraham Shimon, z”l, and Esther, a”h, Eilenberg settled after the war together with a group of other survivors. When he was seven years old, the family immigrated to the United States, first settling in Pittsburgh before relocating to New York.

Young Yankel studied in Yeshivas Karlin Stolin, where he quickly became distinguished for his brilliance and tremendous ahavas haTorah. He eventually traveled to Eretz Yisrael, where he was among the celebrated talmidim of Yeshivas Chiddushei Harim in Tel Aviv. During those years he merited a special closeness to the Beis Yisrael of Ger, zy”a.

In 1976 he married Raizel Grape. The couple established their home in Boro Park, where Reb Yankel became a prominent member of the Gerrer community.

While running a successful business, he still managed to spend a great many hours learning Torah and delivered a Daf Yomi shiur for many years. Those who knew him remember the niftar’s impressive bekius in all areas of Shas and Poskim. He was a wellspring of chiddushim and could discuss topics in Torah for hours with the greatest excitement.

Reb Yankel performed many chassadim of all types. He gave untold sums of money to needy individuals and worthy causes, and was always ready to bolster other Jews with words of encouragement and to visit the sick. Perhaps most outstanding was that the niftar not only ran from any kavod for his acts of chessed, but he did not even need the satisfaction of personally seeing the fruits of his labor. He often gave money to third parties, going out of his way not to know who the actual recipients were.

The levayah was held on Motzoei Shabbos in Boro Park and continued to Eretz Yisrael. The Gerrer Rebbe, shlita, attended the levayah in Shamgar, where Reb Yankel’s son and son-in-law delivered hespeidim. The levayah then proceeded to the old Gerrer beis medrash on Rechov Ralbach, and from there to burial on Har Hazeisim.

He is survived, ybl”c, by his wife and children as well as many grandchildren.

This article appeared in print on page 8 of the November 16th, 2015 edition of Hamodia.