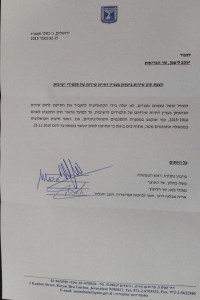 The Moetzes Gedolei HaTorah of Agudas Yisrael gathered Sunday to discuss the change to the Draft law.

The Moetzes were presented with a signed letter by Prime Minister Binyamin Netanyahu addressed to Minister of Health, Rabbi Yaakov Litzman, and co-signed by all the coalition leaders.  The letter promises to pass the revised Draft law after the Budget law is passed. This was a sticking point as Yahadut Hatorah insisted the coalition agreement on the Draft law be fulfilled forthwith.

In attendance were the Rebbes of Ger, Belz, Vizhnitz, Erlau, Slonim, Boyan, Biala and Modzitz. The revised Draft law is to repeal the draconian laws against yeshivah bachurim and kollel members, which were passed in the last Knesset.

The Moetzes approved of the MKs’  voting for the budget first because of time constraints after which the draft law will be passed as promised in the coalition agreement.

This article appeared in print on page 11 of the November 16th, 2015 edition of Hamodia.