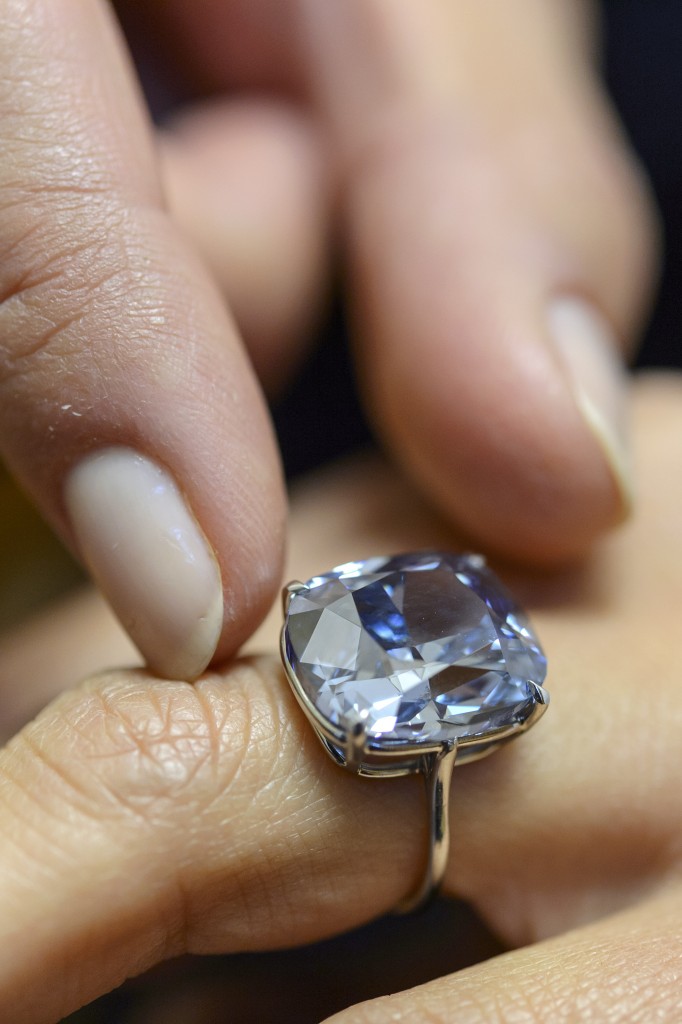 Sotheby’s says a rare blue diamond has sold for a record 48.6 million Swiss francs ($48.5 million) at a Geneva auction, including fees.

The 12.03-carat ‘Blue Moon’ diamond, set in a ring, is said to be among the largest known fancy vivid blue diamonds and was the showpiece gem at Wednesday’s auction in Geneva. The price fell within the pre-auction estimate of $35-$55 million. A packed auction room broke into applause after the hammer came down at a price of 43.2 million Swiss francs, excluding fees.

The Blue Moon – so-called in reference to its rarity, playing off the expression “once in a blue moon” – topped the previous record price of $46.2 million set five years ago by The Graff Pink.

On its Twitter account, Sotheby’s said the jewel was purchased by a Hong Kong private collector and promptly renamed ‘The Blue Moon of Josephine’ – a similar name to one given to a pink diamond ring that sold for $28.5 million at Christie’s in Geneva a day earlier: ‘Sweet Josephine.’ That, too, was bought by a Hong Kong collector who was not publicly identified.

A Sotheby’s spokeswoman was not immediately available for comment.

The polished blue gem was cut from a 29.6-carat diamond discovered last year in South Africa’s Cullinan mine, which also yielded the 530-carat Star of Africa blue diamond in the British crown jewels.

Sotheby’s says experts took five months for an “intense study” of the original diamond, and a master cutter took another three months to craft, cut and polish the stone. The auction house said in a video that the Cullinan mine was the “only reliable source in the world for blue diamonds,” and only a tiny percentage of those found in it contain even a trace of blue.

Blue diamonds are formed when boron is mixed with carbon when the gem is created.