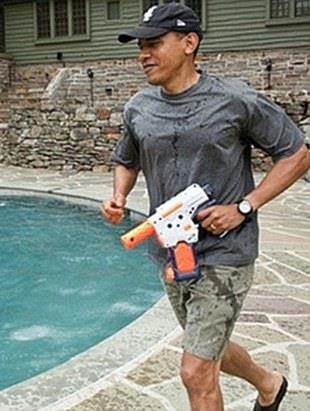 Old time favorites Twister, puppets and the Super Soaker squirt gun were inducted Thursday into the National Toy Hall of Fame for 2015.

A panel of experts picked the inductees from a field of 12 finalists that also included the spinning top, coloring book, Wiffle Ball, American Girl dolls, Battleship, Jenga, PLAYMOBIL, and scooters.

Twister inventor Reyn Guyer made the game pieces that intertwine as they try to reach hands and feet to colored dots without landing in a heap on a plastic mat.

“Some saw Twister as a passing fad, but large-scale Twister matches, popular on college campuses in the 1980s, boosted sales,” said Nicolas Ricketts, a curator at The Strong museum where the hall of fame is housed.

More than 27 million $10 Super Soakers were sold in the first three years after Larami Corp. began producing them in 1990. The high-powered water blaster was the invention of Dr. Lonnie Johnson, a nuclear engineer who got the idea from a pressurized heat pump he was designing for NASA’s Galileo Mission to Jupiter. He made the first one from PVC pipe and an empty soda bottle.

Anyone can nominate a toy for hall inclusion. But to be inducted, they must have survived the test of time, be widely recognized and foster learning, creativity or discovery through play.

The puppet has been around for ages and throughout the world. The Strong cited written references to puppets by Plato and Aristotle and said ancient puppeteers used clay and ivory figures.

“Hand puppets have been a popular toy form for more than a century,” curator Patricia Hogan said. “Playing with puppets helps children develop coordination and manual dexterity. Children use their imaginations to provide voice, plot and purpose to their puppet characters.”