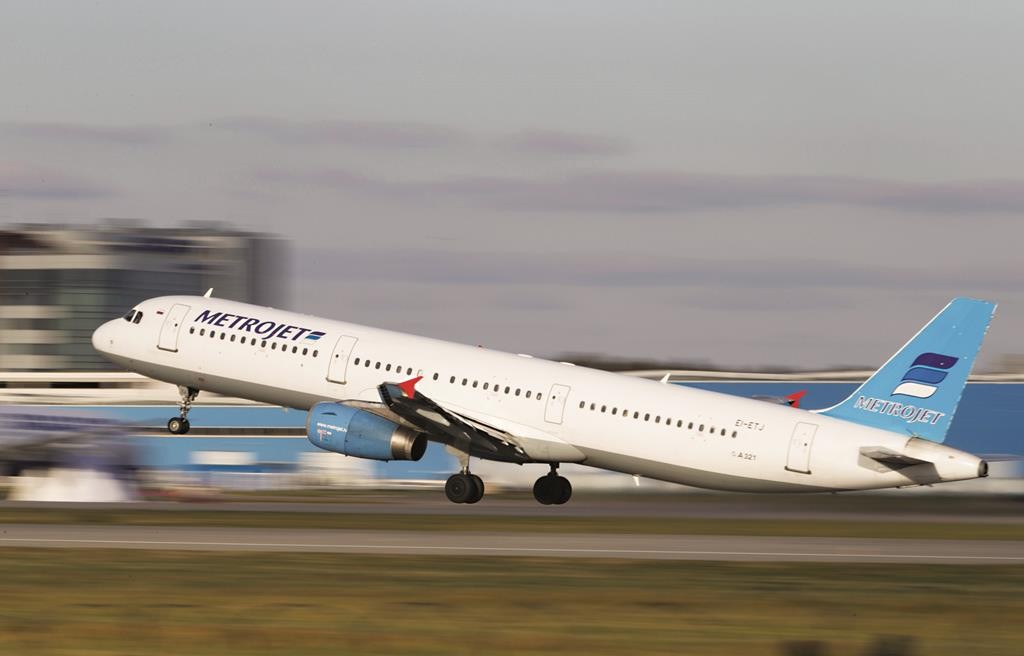 U.S. satellite imagery detected heat around a Russian passenger jet just before it went down in Egypt’s Sinai Peninsula, two U.S. officials said Tuesday. (Both U.S. officials spoke on condition of anonymity because they weren’t authorized to discuss the information publicly.) But the discovery doesn’t resolve the mystery of why the plane crashed, killing all 224 aboard.

A missile striking the Metrojet Airbus A321-200 was ruled out because neither a launch nor an engine burn had been detected, one of the officials said.

The infrared activity that was detected could mean many things, including a bomb blast or that an engine on the plane exploded due to a malfunction.

Aviation analyst Paul Beaver said the heat picked up by the satellite “indicates that there was a catastrophic explosion or disintegration of the airplane,” but doesn’t reveal the cause.

“It doesn’t tell us if it was a bomb … or if somebody had a fight in the airplane with a gun – there is a whole raft of things that could happen in this regard,” he said.

It also could indicate a fuel tank or engine exploding, although “engines are designed so that if something malfunctions or breaks off, it is contained within the engine,” Beaver added.

Some aviation experts had earlier suggested a bomb was the most likely cause of Saturday’s crash, while some others pointed at a 2001 incident in which the jet damaged its tail during landing.

The Metrojet was flying from Egypt’s Red Sea resort of Sharm el-Sheikh to St. Petersburg when it crashed in the Sinai Peninsula after breaking up at high altitude, Russian aviation officials said.

Islamic State terrorists said they had “brought down” the Russian plane because of Moscow’s recent military intervention in Syria against the extremist group. But the group did not provide any evidence to support its claim, and terrorists in northern Sinai have not shot down any commercial airliners or fighter jets.

Egyptian President Abdel-Fattah el-Sissi called that claim “propaganda” aimed at damaging the country’s image, and he insisted the security situation in the Sinai Peninsula is under “full control.”

In an interview with the BBC, el-Sissi also reiterated that the cause of the crash may not be known for months and said there should be no speculation about it.

President Vladimir Putin said Russia will keep fighting terrorism in Syria and elsewhere, adding that no one will succeed in scaring Russia. His spokesman, Dmitry Peskov, rejected any connection between the crash and the Russian military action in Syria, saying there is no reason to link them.

An international team of experts prepared to analyze the plane’s flight data and cockpit voice recorders, the so-called “black boxes.”

The joint investigation committee, which includes Egyptian, Russian, French and German experts as well as representatives from Ireland, where the plane was registered, was wrapping up its last field inspection at the crash site. It will start working on the recorders, said Egyptian Civil Aviation Minister Hossam Kamal.

Kamal says it “will take some time” to produce the final report and that the committee “has all the tools and experts to deal with the investigation.”

Russian Transport Minister Maxim Sokolov said in televised remarks that Russian experts already had conducted a preliminary inspection of the recorders and had seen information from Egypt’s flight control radars, but he wouldn’t give further details.

As the investigation moved forward, more of the dead were brought to St. Petersburg. Alexei Smirnov of the Russian Emergency Situations Ministry said government planes have brought 140 bodies and other human remains so far, and families have identified 19 victims.

Mourners continued to come to St. Petersburg’s Pulkovo airport to lay flowers, toys and other tributes. On the outskirts of town, tearful relatives of the victims left a crematorium where the identification process took place.

Alexander Agafonov, head of the Russian rescue mission in Egypt, said in a televised conference with other officials that searchers found no more bodies Tuesday after combing an area of 28 square kilometers (10.8 square miles). Emergency Situations Minister Vladimir Puchkov said the site “should be studied centimeter by centimeter.”

“If you need to sift through the sand where the remains or pieces of the fuselage could be, do it,” he said.