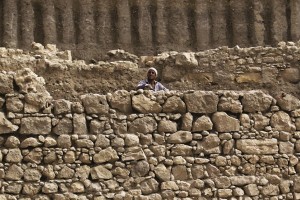 After years of searching, archaeologists think they have found the remnants of an ancient Greek fortress once a center of power in Yerushalayim and a stronghold used to hold off the revolt of the Chashmona’im.

Researchers have long debated over the location of the Acra, built by Antiochus.

But the remains unearthed by the Israel Antiquities Authority and made public on Tuesday are outside the walls, overlooking a valley to the south.

With an estimated length of up to 250 yards and 60 yards in width, it would have dominated the countryside.

Beneath what a decade ago was a paved parking lot, the archaeologists sifted through an artificial hill made of layers of earth left behind by successive cultures.

In one area they uncovered stones from a section of a massive wall, the base of a tower and a sloping defensive embankment that nearby artifacts like coins and wine jug handles thought to be from the period of Antiochus.

Lead sling stones and bronze arrowheads from the period were also found, perhaps left over from battles between pro-Greek forces and Jewish rebels trying to take over the fortress.

This article appeared in print on page 29 of the November 4th, 2015 edition of Hamodia.