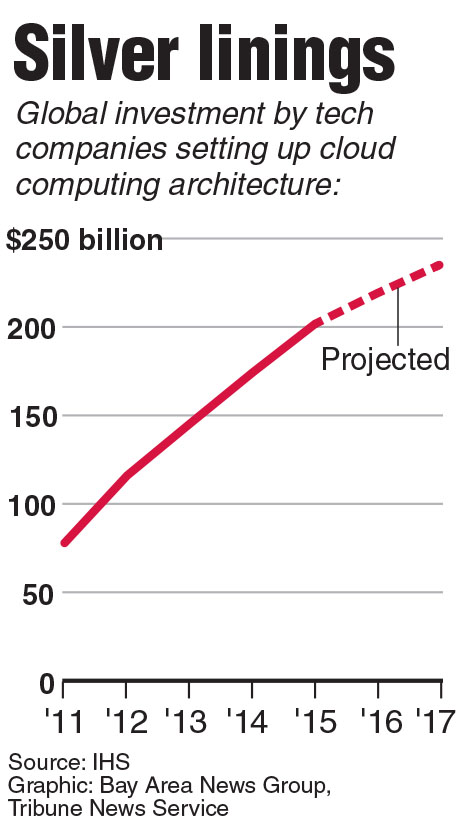 A billowing internet cloud is enveloping some of Silicon Valley’s legendary companies, forcing an upheaval in the way they’ve done business for decades.

In what some would say is an overdue recognition that the cloud is the future of computing, venerable valley companies like Hewlett-Packard, Oracle and Cisco Systems are scrambling to build data centers, launch new business lines, create cloud services and convert software that came in a box to software that’s rented over the internet.

“Senior management, boards and investors see this giant iceberg coming at them,” said Patrick Moorhead of Moor Insights and Strategy. “It’s no trivial task to take an application of yours that’s 10 years old and move it to the cloud.”

But there’s no choice — a shift from traditional in-house corporate networks to faster, cheaper data centers accessed via the internet is changing the information technology business model and will create a $235.1 billion cloud market by 2017, according to the research firm IHS .

“There is a sea change in what most customers are looking for,” Hewlett-Packard CEO Meg Whitman told analysts in September. “Our customers are in a period of transformation and transition that you see only once every 10 to 15 years in this industry.”

Next month, HP will split into two companies, one of which — Hewlett Packard Enterprise — will be run by Whitman and focused on business services, big data, mobile and a hybrid of private and public cloud computing.

The new HP is the result of a four-year “journey” the company began in 2011, Whitman said.

In further proof of the changing market, Dell announced this month that it is buying data-storage company EMC in a $67 billion merger that is in part spurred by pressures on both companies from mobile computing and the cloud, with Michael Dell citing “a need to enter this new age,” in an interview with CNBC.

Nowhere is the conversion to the cloud more striking than at Oracle, which has traditionally sold software and hardware to companies to run at their own data centers.

Oracle founder Larry Ellison is famous for dismissing the cloud as little more than the latest fad in computing.

“I have no idea what anyone’s talking about,” he told financial analysts in 2008. “It’s really just complete gibberish. When is this idiocy going to stop?”

That was then. The enterprise software giant has just finished three years of building data centers around the world in what co-CEO Safra Catz called “this extremely quick transition which you are truly seeing the pivot in this fiscal year.”

“This is one of the largest transformations in the company’s history,” said Shawn Price, a senior vice president at Oracle, speaking by phone from Sao Paolo, Brazil, where Oracle was opening a new data center. Price was hired away from SAP last year to run cloud strategy and marketing at Oracle.

“The future is here and it’s now. We’re disrupting ourselves. We’re saying much of what companies are trying to solve, they can’t solve on premise” with their own data-center operation, Price said. “We’re saying, ‘Let us run it for you.’ ”

“Enterprises see that as a cost sink, where money goes to die,” said Carl Brooks of 451 Research.

“You have an IT department that needs to do twice as much as it did last year and no budget to do it. The only way to solve it is to look for external efficiencies. Amazon for $1 does twice as much as I can do myself. Amazon takes 17 cents off the top and says, ‘We’ll be here when you need us.’ You don’t have to break any ground, dig holes or build a building. All enterprises, when facing this extreme pressure to increase (data) capacity without increasing budget, look outside.”

The cloud has another big advantage besides cost savings: speed. For example, Softlayer, acquired by IBM, can build out a data center for a client and get it up and running in a couple of days, several analysts noted.

Cisco Systems, which sells its networking gear to corporate customers, announced a billion-dollar investment in “cloud infrastructure” two years ago, and “continues to make investments in engineering and acquisitions to transform other parts of its portfolio for the cloud era,” a spokesman said.

“In many ways, Cisco is going to be a strong supplier to everyone who builds and runs clouds,” said Bartoletti. “It’s all going to depend on rock solid networking holding it together.”

But Cisco is facing headwinds as the largest cloud companies, Facebook, Google and Amazon, develop their own networking hardware.

“Companies are trying to cut back on internal hardware investments, and the cloud is very attractive,” said Jack Gold of J. Gold Associates. “They don’t have to go out and buy a bunch of servers and Cisco routers.”

Another old-time company, chipmaker Intel, would seem to win no matter what, since nearly everyone uses the chips it makes for data-center servers. But even Intel is jumping into the cloud. It announced an initiative in July to help businesses deploy public, private and “hybrid” clouds.

“We love all clouds,” said Intel spokesman Mark O. Miller. “We don’t have to pick winners.”