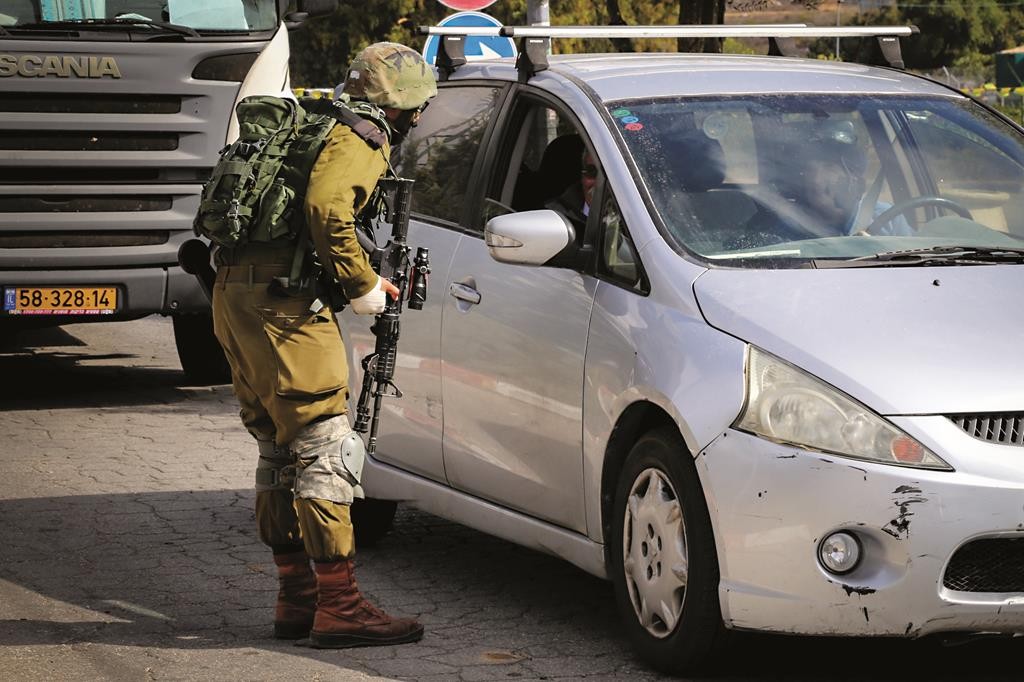 For the third consecutive day, Chevron on Thursday was the target of Palestinian terror in which an IDF soldier was lightly wounded.

In the first of two incidents, a Palestinian stabbed and wounded a soldier in the face near a checkpoint on the road between the Kiryat Arba and Me’aras Hamachpelah on Thursday morning

The soldier himself chased the assailant, who then tried to stab a border policeman at the scene. Another border police officer shot and killed the knife-wielding assailant, according to a police statement.

The soldier was treated at the scene and transported by Magen David Adom ambulance to the Hadassah University Medical Center in Ein Kerem.

“At approximately 8:08 a.m., Magen David Adom rescue services in Jerusalem received an urgent report about a young man wounded in a stabbing attack on the road connecting Chevron and Kiryat Arba,” the Magen David Adam first response organization said in a statement.

It was the fifth such attack in the city this week.

A few hours later, a Palestinian man armed with a knife was shot by security forces after attempting to stab an Israeli in the Beit Hadassah complex in Chevron. No Israelis were reported injured in the attack.

The terrorists in both incidents were shot and killed by security forces.

In Yerushalayim, police used stun grenades to disperse about 100 people protesting outside a hospital in the city’s eastern sector on Thursday. The protesters said they were demonstrating against Israeli police who during the current unrest have entered the hospital to seize files related to Palestinians wounded in clashes.

Israeli police spokeswoman Luba Samri said the hospital is legally required to report about people it treats who were involved in “criminal or violent activity,” and that the police entered the site after discovering the hospital hadn’t done so.

Also Thursday, Israel’s Justice Ministry said an Arab woman who was shot after brandishing a knife at a busy bus station did not intend to carry out an attack.

The 29-year-old woman, Asraa Abed, was surrounded by Israeli forces and then shot after she drew a knife at a bus station in northern Israel earlier this month. The Justice Ministry said an investigation determined the woman was mentally unstable and suicidal and had pulled out the knife in order to be shot and killed. Abed, who survived the shooting, was indicted Thursday for carrying a knife.

In a fresh response to the series of Palestinian attacks on Israelis in the Gush Etzion Junction area, the IDF has doubled the number of units on patrol there, The Jerusalem Post reported.

In addition, concrete blocks have been set up around bus stops and hitchhiking posts to deter hit-and-run terrorists, along with numerous surveillance cameras to help the IDF investigate past incidents and monitor the security situation.

According to regional council head Davidi Perel, the IDF has decided that soldiers stationed at the Junction will, as far as possible, keep Palestinians away from the Jewish population.

It was not immediately clear how such a policy could be implemented, though, given that many Jews and Arabs work side-by-side in business in the area.