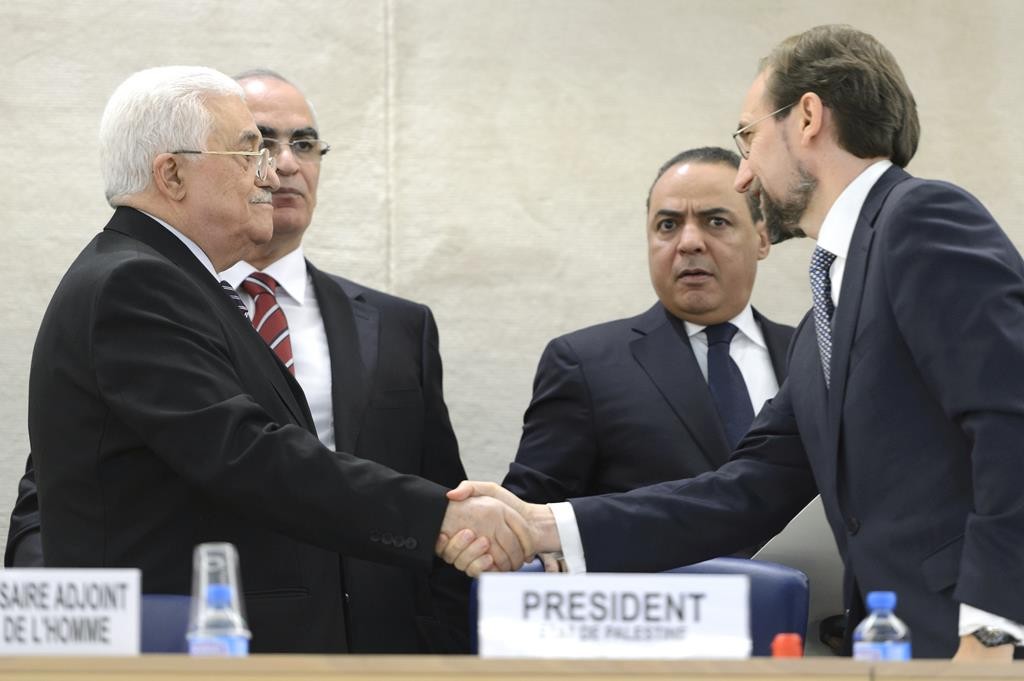 Palestinian President Mahmoud Abbas on Wednesday called for international protection for the Palestinians, saying the human rights is the worst it has ever been, in a speech that threatened to stir up new tensions with Israel just as U.S.-led efforts to calm the situation in the region are getting under way.

The speech was given at a presumably sympathetic venue, a special session of the U.N-backed Human Rights Council in Geneva, which has been cited numerous times by Israel and the U.S. for its anti-Israel bias.

Abbas called on the Security Council to set up a “special regime of international protection for our Palestinian people. We want your protection — we want the protection of the world,” and again blamed Israel for the daily stabbings and shootings perpetrated by Palestinians.

Israel denounced the speech for “glorifying” violence against Israelis and further and charged that it “fanned the flames of the conflict.”

“What we have witnessed today is the glorification of terror and violence,” Israel’s Ambassador to the UNHRC Eviatar Manor told the diplomatic corps in Geneva hours after Abbas’s speech.

“What the Council allowed today is the banalization of the spilling of Jewish blood,” The Jerusalem Post quoted Manor as saying.

Abbas criticized Israeli Prime Minister Binyamin Netanyahu for comments a week earlier asserting that Nazi sympathizer Haj Amin al-Husseini, a former grand mufti of Yerushalayim, persuaded Hitler to embark on his genocidal policy against the Jews. He accused Netanyahu of exploiting the Holocaust to falsely blame the Palestinians. Prominent Jewish historians also rejected Netanyahu’s version of history, saying that Hitler had decided on genocide long before al-Husseini arrived in Berlin.

In a related development, the municipality of Surda-Abu Qash, near Ramallah, decided to name a street after Muhannad Halabi, the 19-year-old terrorist who murdered two Jews in the Old City of Yerushalayim earlier this month, according to Palestinian Media Watch.

The official video of the event showed a student reciting a prayer for the martyrs.“Our dear martyrs sacrificed their lives for their country so that we can live with dignity … we will complete what they have started and planned,” said one of the hundreds of students at the ceremony.

The school is privately run. The Yerushalayim Municipality explained: “This is a private school that is not supervised by the Ministry of Education or the Municipality, and therefore we have no authority to deal with the issue.”