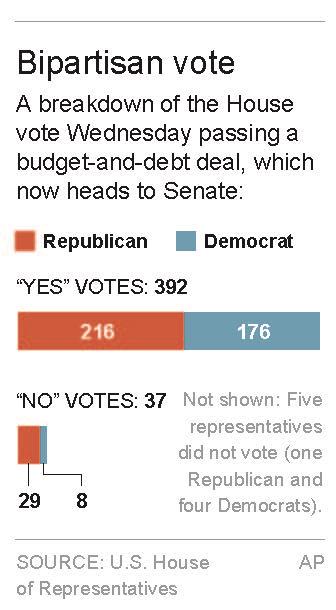 The House has passed a bipartisan budget-and-debt deal that prevents an unprecedented government default.

A coalition of Democrats, GOP defense hawks and pragmatic Republicans supported the measure.

The agreement, approved 266-167, would raise the government’s borrowing limit through March of 2017, averting an unprecedented default just days away. It would also set the budget of the federal government for the next two years, lifting onerous spending caps and steering away from the brinkmanship and shutdown threats that have haunted Congress for years.

The legislation now heads to the Senate, which is on track to pass it before Tuesday’s deadline for increasing the so-called debt limit. It gives the government authority to borrow freely through March 2017.