Israel For Second Day in a Row, Terror Attacks at Gush Etzion Junction and Chevron
Israel 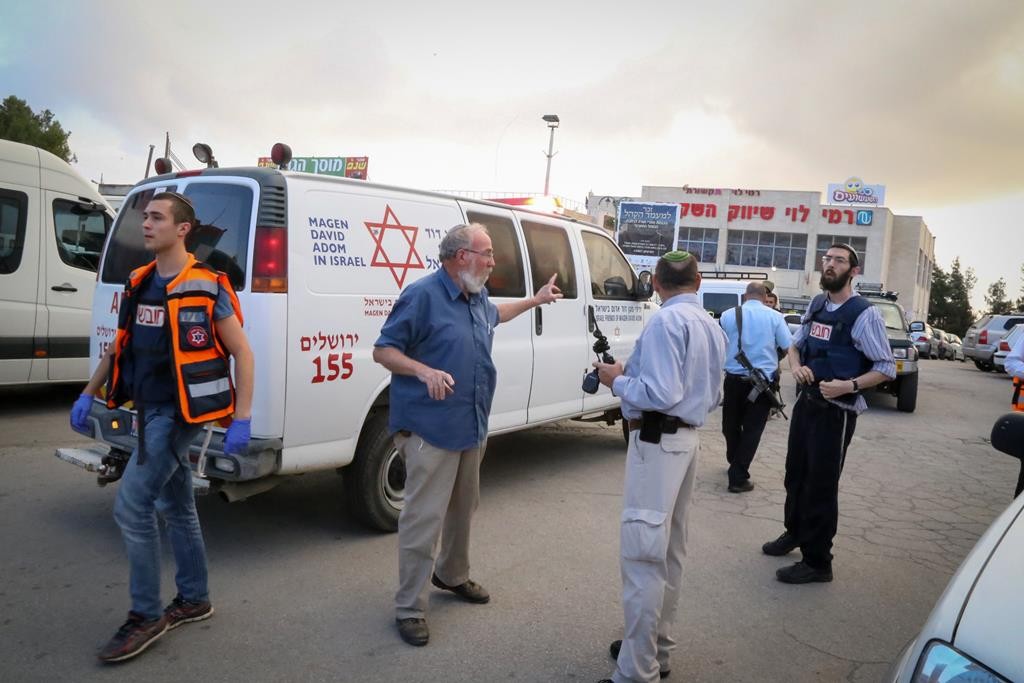 A Palestinian terrorist stabbed an Israeli woman in the back, moderately wounding her, outside the Rami Levy supermarket at Gush Etzion Junction on Wednesday.

This and a second attack just before it were nearly identical repeats of two incidents in the same area on Tuesday.

The victim was a resident of Bait Hagai, south of Har Chevron, who was attacked as she left the gas station at the Gush Etzion Junction.

The attacker fled the scene, but passersby pursued him, soon joined by soldiers who overtook and subdued him. Initial reports did not give details about him.

“When I arrived to the scene, I saw an approximately 40-year-old woman sitting in her vehicle,” MDA paramedic Wally Wolfstahl said. “She was fully conscious and suffering from a stab wound to the upper body. People on the scene told me they put her in the vehicle after she was stabbed by a terrorist.

“We gave her medical care with the help of IDF medics that arrived on the scene. After giving her first aid in the field, we sent her to the hospital. She is in moderate and stable condition,” he said.

At Shaare Zedek hospital in Yerushalayim, in a delicate and complicated operation, surgeons managed to remove the knife without rupturing any arteries. She was then examined to assess the extent of the damage caused by the wound and the required treatment.

The public is asked to daven for the speedy recovery of Nirit Chanah bat Nitzah.

Following the incident, the Rami Levi management, the IDF and regional leaders held a meeting to plan a series of additional counter-terror measures, Arutz Sheva said.

Less than a half hour earlier on Wednesday, a Palestinian man attempted to stab an Israeli soldier in the Tel Rumeida area of Chevron, but before he could do harm was shot dead by security forces.

According to the IDF, the attacker drew a knife and tried to stab soldiers guarding the Gilbert checkpoint.

The incident took place near Me’aras Hamachpelah, the scene of several stabbing attacks in recent days. This was the fourth in as many days.

Overnight Tuesday, IDF, Border and local police units arrested 33 Palestinians during raids in Yehudah and Shomron and the Jordan Valley.

The suspects were arrested under suspicion of terrorist involvement and for violence against the civilian population and security forces. They were handed over to the Shin Bet for questioning, The Jerusalem Post reported.

A 20-year-old soldier hit in a car attack last week on Highway 60 has recovered, and is now listed as in light condition.

Three-year-old Tahel Sofer, who was burned in a firebomb attack near Beit El in the Shomrom, continues to be treated from burn wounds but is lightly wounded.

Female IDF soldier Dakla Magdish, who was stabbed at Adam Junction in the Binyamin region last week, is recovering from moderate wounds and doctors are optimistic that she will make a full recovery. She is now able to communicate with the medical team and her family.

A police officer who was critically wounded in an attack at the Damascus Gate of Yerushalayim’s Old City has been transferred from Hadassah Ein Kerem hospital to Shaare Zedek Hospital. The officer is still in serious condition, but is no longer anesthetized and asleep.