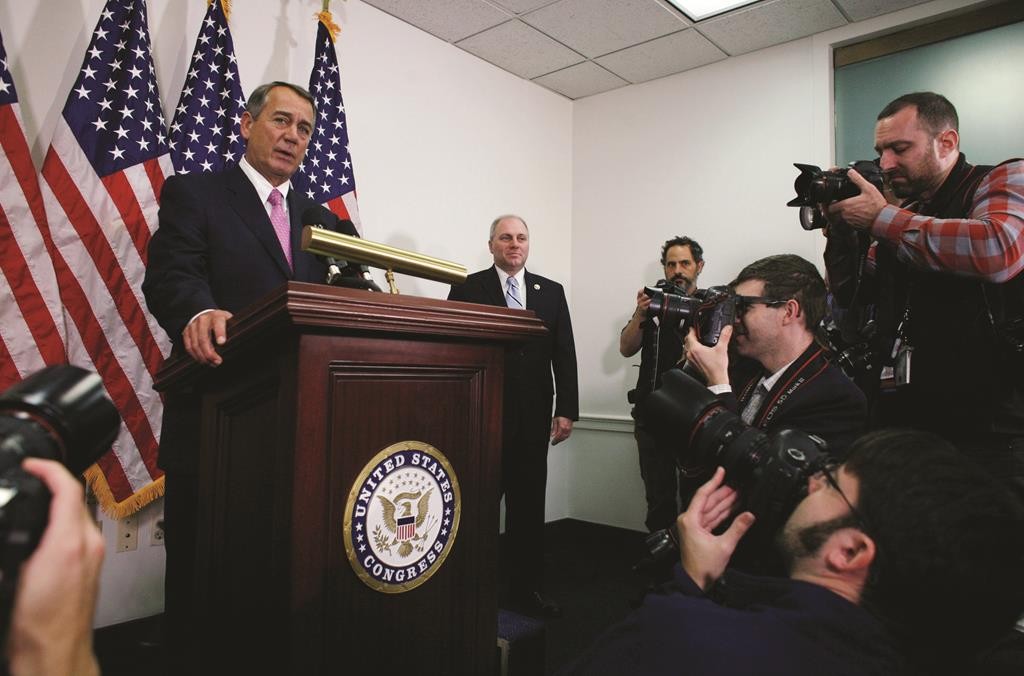 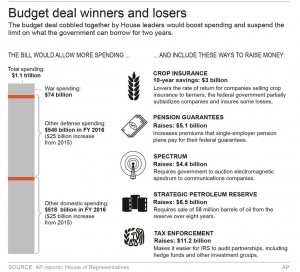 Striving to end a cycle of crisis, congressional leaders and the White House united Tuesday behind an ambitious budget and debt deal aimed at restoring a semblance of order to Capitol Hill and ending the threat of government shutdowns and defaults until well after a new president takes office.

The outgoing House speaker, Republican John Boehner of Ohio, prepared to push the deal through his unruly chamber on Wednesday as his last act before departing Congress at the end of the week.

All but forced to resign under conservative pressure, Boehner was nonetheless going out on his own terms. The budget deal stands as an in-your-face rebuttal to his hardline antagonists, on Capitol Hill and off, who angrily oppose spending increases and compromises with Democratic President Barack Obama.

They seethed but acknowledged they were powerless to stop an agreement all but certain to pass with votes from Democrats and a sizable number of Republicans. Boehner brushed off their complaints, declaring that he intended to make good on his promise to leave a “clean barn” for his successor, Paul Ryan of Wisconsin, who is set to get the GOP nomination for speaker on Wednesday and win election on the House floor the day after that.

During the meeting, Republican lawmakers had a parting gift for Boehner: a golf cart with Ohio license plates reading “MR SPKR”.

Boehner told them he had a gift in return: the budget deal.

The deal would boost military spending as sought by defense hawks, even as it would take away the threat of “fiscal cliffs” by a GOP-led Congress in the middle of a campaign season where Republicans are aiming for the White House and trying to hang onto their slim Senate majority.

Struck over recent days in closely held talks with White House officials and top House and Senate leader of both parties, the agreement would raise the government debt ceiling until March 2017, removing the threat of an unprecedented and market-rupturing national default just days from now. At the same time it would set the budget of the government through the 2016 and 2017 fiscal years and ease punishing spending caps by providing $80 billion more for military and domestic programs, paid for with a hodge-podge of spending cuts and revenue increases touching areas from tax compliance to spectrum auctions.

The deal would also avert a looming shortfall in the Social Security disability trust fund that threatened to slash benefits, and head off an unprecedented increase in Medicare premiums for outpatient care for about 15 million beneficiaries.

Obama said the budget deal “reflects our values” and responsibly pays for investments in the middle class and national security.

“It’s an actual bipartisan compromise, which hasn’t been happening in Washington a lot lately,” the president said.

Congressional Democrats have pushed for months for such a deal, bottling up routine spending bills in an effort to produce negotiations that would result in increased domestic spending.

With resignation, one of the conservative rebels, Rep. Thomas Massie of Kentucky, complained of the deal and Boehner: “We can’t stop it. He’s in league with the Democrats.”

But Massie also said that “it’s a long game” and that conservatives are winning the war after forcing Boehner to resign and cowing his heir apparent, Majority Leader Kevin McCarthy, into dropping his candidacy. That caused a power vacuum that threw the House into pandemonium for much of this month, until GOP leaders prevailed upon a reluctant Ryan, the party’s 2012 vice presidential nominee, to seek the speakership.

Despite conservative anger over the budget deal, hard-liners sounded reluctant to take their fury out on Ryan, who claimed to have no role in the agreement and indeed criticized how it came about.

Several GOP critics pointed out that the deal bears striking similarities to a pact that Ryan fashioned two years ago in concert with Sen. Patty Murray, D-Wash., to ease automatic spending cuts for the 2014-15 budget years. They labeled the new deal “Ryan-Murray 2.0,” and outside conservative groups such as Tea Party Patriots and Heritage Action for America promptly issued press releases lambasting it and calling on lawmakers to reject it.

In the past such pressures have thrown Congress into disarray, producing a partial government shutdown two years ago as conservatives clamored to end Obama’s health care law and causing a near-shutdown of the Homeland Security Department earlier this year over Obama’s immigration policies.

This week, at least, that dynamic has been turned on its head. In addition to moving toward passage of the bipartisan budget deal, the House was expected to vote late Tuesday to revive the federal Export-Import Bank, supposedly killed off earlier in the year by conservatives who attacked it as corporate welfare.

It’s not clear whether the marginalization of the most conservative forces in Congress will last – or if it simply took a lame-duck speaker with nothing to lose to bring temporary order to Capitol Hill.

“It may have taken Boehner to actually be told he’s not going to stay as speaker to have the ability and the power to do this now,” said Democratic Rep. Dutch Ruppersberger of Maryland.