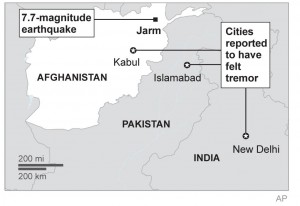 A massive earthquake struck remote and impoverished regions of northern Afghanistan and Pakistan on Monday, killing at least 263 people as it shook buildings across South Asia and knocked out power and communications to already-isolated areas.

In the Afghan capital of Kabul, buildings shook for up to 45 seconds, walls cracked and cars rolled in the streets as electricity went out. Frightened workers who had just returned from lunch also rushed from swaying buildings in the Pakistani capital of Islamabad and to the south in the Indian capital of New Delhi.

At least 228 people were killed in Pakistan, with more than 1,000 injured, while Afghan officials reported 33 dead and more than 200 injured, and authorities in the Indian-controlled Kashmir region reported two deaths. Officials expected the casualty toll to rise as they reached the remote areas.

Authorities struggled to reach the hardest-hit areas in Afghanistan near the epicenter, located 45 miles south of Fayzabad, the capital of Badakhshan province.

Despite vast mineral deposits, Badakhshan is one of Afghanistan’s poorest provinces. It is often hit by earthquakes, but casualty figures are usually low because it is so sparsely populated, with fewer than 1 million people spread across its vast mountains and valleys. It also suffers from floods, snowstorms and mudslides.

Taliban-led insurgents have used its remote valleys as cover recently to seize districts as they spread their footprint across the country. Dehqan said some districts remain under Taliban control “and we don’t know how we will be able to help people in those areas.”

This article appeared in print on page 1 of the October 27th, 2015 edition of Hamodia.