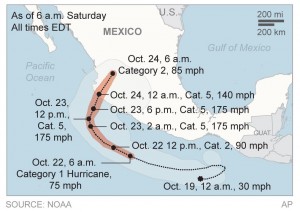 Drenching storms that the remnants of Hurricane Patricia dragged into Texas finally cleared Sunday without leaving behind the death or devastation of torrential rain and floods that hit the state earlier in the year.

Some parts of Texas have been pounded by more than a foot of rain since Friday, shutting down busy highways and derailing a train.

But relentless showers were gratefully the only comparison to Memorial Day storms that killed more than 30 people in Texas and Oklahoma and stranded 2,500 cars around Houston.

One man remained missing near San Antonio after authorities say he was caught by floodwaters, but no deaths in Texas have been confirmed.

“We’re going to stand down the emergency management operations and call it a day,” said Galveston County Judge Mark Henry, who had issued a voluntary evacuation covering roughly 4,000 homes.

Patricia roared ashore in Mexico on Friday as a Category 5 terror that barreled toward land with winds up to 200 mph. But the arrival of the most powerful hurricane on record in the Western Hemisphere caused remarkably little destruction, and what was left of Patricia by the time the weakened storm straggled into parched Texas was greeted with both relief and unease.

On Saturday, a Union Pacific freight train derailed before dawn Saturday near Corsicana, about 50 miles south of Dallas, because a creek overflowed and washed away the tracks, said Jeff DeGraff, a railroad spokesman.

The two crew members swam to safety and nobody was hurt, and several rail cars loaded with gravel were partly submerged, he said.

This article appeared in print on page 2 of the October 26th, 2015 edition of Hamodia.