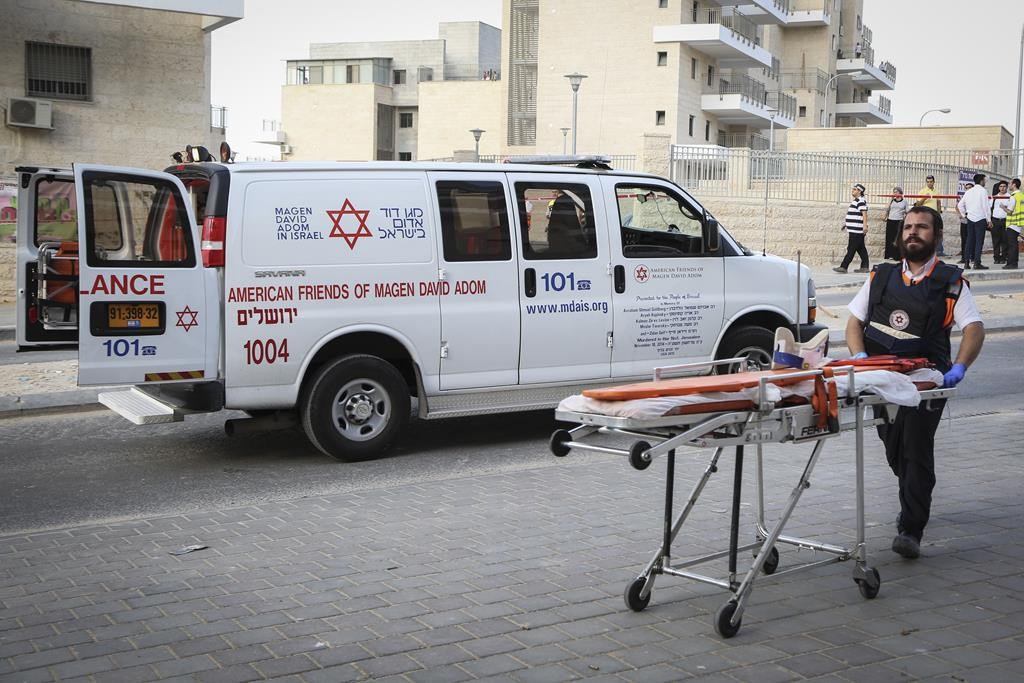 Beit Shemesh became the latest Israeli city to be the scene of a terrorist attack on Thursday morning, when two Palestinians set upon an 18-year-old yeshivah student and stabbed him outside the Kol Yehudah shul.

The victim, whose name was not released, was evacuated in mild to moderate condition to Hadassah Ein Kerem Hospital in Yerushalayim.

The two attackers, both from the village of Tzurif near Chevron, were subsequently shot and killed by security forces.

Before attacking him, the pair first attempted to board a school bus in the Ramat Beit Shemesh Gimmel neighborhood, but were repelled by the driver. They continued down the street before stabbing the young man. Then they were shot down at a nearby bus stop, police and eyewitnesses told The Jerusalem Post.

The two terrorists were in their 20s; one was involved in disseminating propaganda for  Hamas, the other served time in an Israeli prison between 2012 and 2014 after being arrested for carrying a knife near Me’aras Hamachpelah.

Both wore t-shirts with the logo of the Izzadin Kassam Brigades, the name of Hamas’s military wing in Gaza, making their motives obvious.

Eyewitnesses described the panic that took hold as the incident unfolded:

Chaim Hazany, 13, saw the police shoot down the terrorists while riding a bus past the scene.

The passengers on the bus began demanding that the Arab driver open the doors and let them out so they could scatter and hide, he continued. “He said that he would not let anybody off and that he would continue his route.”

But after he was physically threatened, the driver let the passengers out. Hazany ran into a nearby building and began knocking on doors, begging for a hiding place but nobody let him in, he told the Post.

“I’m scared to ride on Superbus,  maybe they will stab us. They tried to get on the bus belonging to the Magen Avot school.”

Others who were in the middle of Shacharis when the attack occurred just outside the shul, recalled panic as mispallelim crowded into a back room to take cover.

Chana Keren was supposed to be at the scene of the attack to put her children on their bus to school, but b’chasdei Hashem, she ran late and missed the attack.

She added that she has already made calls to cancel renovations to her house because of anxiety regarding Arab workers.

“I don’t need Arabs with knives in my garden. Lets get some workers from Thailand. We don’t need Arabs. You know what happened in Har Nof,” she said, referring to last year’s massacre.

“There are usually not a lot of cops here. Its a miracle. It could have been much worse, infinitely worse, if they got on a school bus,” her husband Shlomo added.

“We are scared to go out,” said one crying woman, standing across the street from the scene of the shooting.

Residents are concerned that as a new community still under construction, Ramat Bet Shemesh Gimmel is particularly vulnerable due to the high number of Arab laborers and what they believe is inadequate police protection.
Akiva Marks, who recently moved there from Ramat Beit Shemesh Alef, voiced frustration with security in the area: “Let’s be clear, these guys didn’t drive in here” but work in the neighborhood every day, he said. “Is anyone checking Arab workers if they are authorized to be here? Either no, or the process doesn’t work. Now they will think about it. Now that there is blood on the floor.”

After Thursday’s bloodshed, Beit Shemesh Mayor Moshe Abutbul acknowledged the problem of security in the city.

“We have raised the problem a number of times in emergency meetings with the police, but it was made clear that there is no legal way to stop the work at the construction sites,” said the mayor.

“We have allocated a structure for a police station in the neighborhood, I hope that its connection to water and electricity will be completed by the end of the day today,” he said.

Construction work in the area continued on Thursday.
When a reporter asked a group of Arab workers to comment on the terror attack all had just witnessed, they just stared without answering, until an older man, who appeared to be their foreman, threw out his arms and said, “There is nothing to say. These things happen.”

“It wasn’t at our hands,” another called out.

In a separate incident later in the day, a Palestinian terrorist attempted to stab an IDF soldier but failed, near the Hassam Shoter checkpoint in the Tel Rumeida area of Chevron. No one was hurt. Soldiers pursued the fleeing attacker, but no arrest was reported.