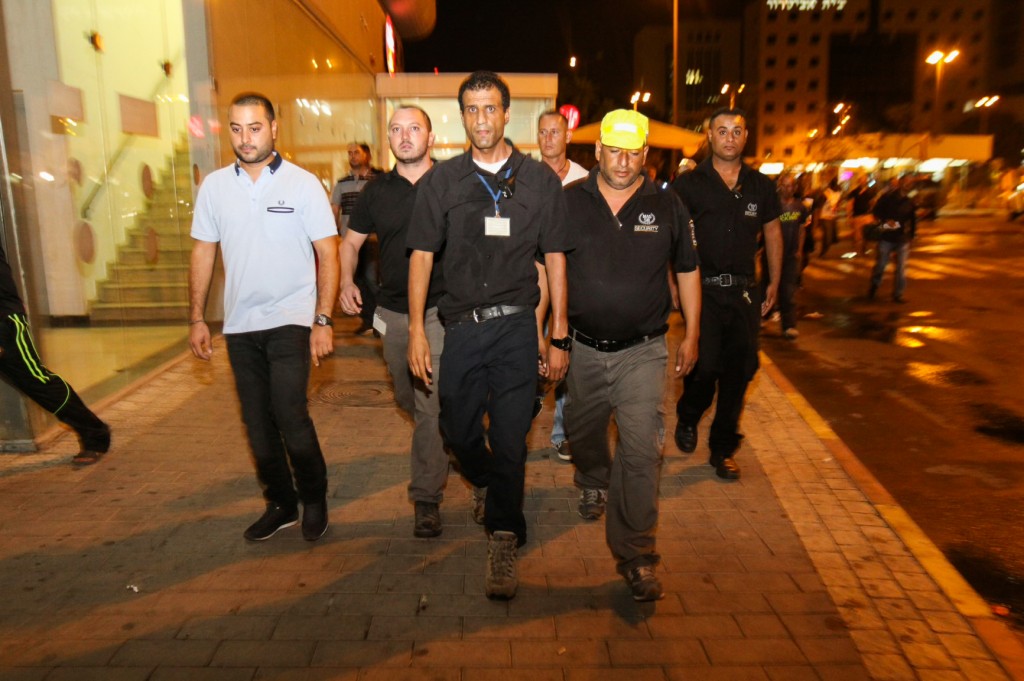 The central bus station in Be’er Sheva, a city which had until now been spared the terror of recent days, was suddenly transformed on Sunday evening into a bloody battleground as a terrorist killed one person and wounded several others in yet another spree of  shooting and stabbing.

Two people were wounded seriously, two were reported in moderate condition and two in light condition. They were taken to Soroka Medical Center in the city. Soroka Hospital said in a statement that nine wounded were brought in from the attack.

The murderous outbreak triggered a horrific scene of panic-stricken travelers fleeing for safety, while dozens of police with drawn guns pursued the terrorists across a crowded area of the bus station.

Paramedics were already evacuating the wounded while the crack of gunshots could be heard above the din of people shouting and screaming.

“Inside of the station there were wounded laid out over an area of about 30 meters, all of them in their late 20s,” Gadi Abuhatzeira, the deputy manager of Magen David Adom’s Negev District, told reporters.

But within a few minutes the police had shot and killed the attacker.

In a tragic error, however, another man, whom police thought was a second terrorist, was shot and seriously wounded. A crowd of enraged bystanders had tried to block the evacuation of the man. Cries of “Death to Arabs,” “Arabs out!” and “Am Israel Chai” were heard. He was taken to the hospital in critical condition where he later died of his wounds.

The terrorist, as yet unidentified by police, entered the bus station from the adjoining rail terminal, though police said they did not know yet how he slipped through security checkpoints. Then he attacked a soldier, killing him with a knife or handgun, grabbed his M-1 rifle and began shooting in all directions.

Police closed the Be’er Sheva central bus station and cordoned off the adjacent streets as well, as they combed the area for any other terrorists that might still be there.

Head of the Negev subdistrict Dep.-Ch. Amnon Alkalai said that police had no prior warning of the attack, and that they were still searching the area for possible accomplices, hours later.

In response to the attack, Deputy Defense Minister Eli Ben-Dahan (Bayit Yehudi), who grew up in Be’er Sheva, called on the international community to stop the Palestinian Authority’s incitement to terrorism.

“The international community must urgently act to curb the incitement and the encouragement of terrorism by the leaders of the Palestinian Authority, and not to plummet into initiatives such as internationalizing Har Habayis, which only encourage terrorism,” said Deputy Defense Minister Eli Ben-Dahan, referring to a draft resolution at the U.N.

Sunday’s assault followed several incidents over Shabbos, in which two people were hurt and four terrorists killed by security forces.

On Shabbos morning in Yerushalayim, a Palestinian teenager who drew a knife on border police in eastern Yerushalayim was shot dead.

Police were called in when an Armon Hanatziv neighborhood resident noticed the teenager acting suspiciously. When police came and demanded to search him, he tried to stab them with a large kitchen knife, and they shot him. Police later identified him as Muataz Awisat, 16, from a nearby Arab section.

A similar incident occurred on Leil Shabbos at the Kalandiya checkpoint, between the capital and Ramallah, when a Palestinian pulled a knife and tried to stab a policeman, but couldn’t pierce the officer’s bulletproof vest.

Officers then opened fire on the attacker, wounding and subduing him.

In Chevron on Shabbos, a Palestinian attempted to stab an Israeli civilian, but the intended target drew his gun and shot the attacker dead.

Later on Shabbos, a terrorist stabbed and moderately wounded a soldier at a police checkpoint in the city; a second soldier shot and critically wounded the Palestinian attacker.

The soldier was admitted to Hadassah-University Medical Center in Yerushalayim’s Ein Kerem with knife wounds to his upper body.

In an attempted stabbing by a female terrorist in Chevron, the border police said the attacker approached a female officer at a checkpost and asked for directions.

When the officer approached her, she said the woman tried to stab her in the neck, but the knife was deflected by her vest. Then she stepped back, and shot the woman with her rifle.

In Chevron on Friday, a Palestinian terrorist disguised as a photojournalist stabbed and moderately wounded a soldier at the Zayit junction outside Kiryat Arba, before he was shot dead by a second soldier.

Also on Shabbos, an estimated 200 Palestinians clashed with the IDF at the Ayosh junction, between Ramallah and Beit El, which has been the scene of violence for several days. A number of rioters were reported wounded.

A crowd of hundreds of Palestinians marched from Chevron to Halhoul Bridge, where they confronted IDF soldiers, who used riot-control measures and fired low-caliber rifle rounds at rioters’ legs.