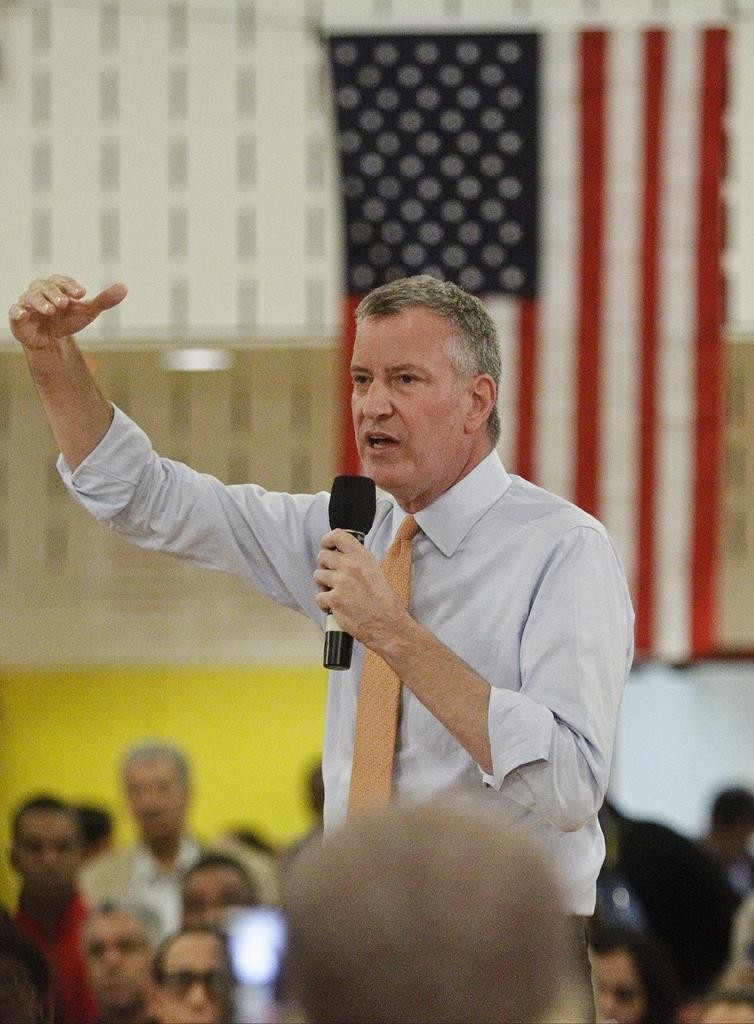 Mayor Bill de Blasio, who has been criticized for not regularly hearing the concerns of his constituents, held his first full-fledged traditional town hall on Wednesday to discuss the issues facing the city’s millions of tenants.

The two-hour town hall, part of a new strategy by City Hall to change the way the Democratic first-term mayor is presented, was largely a friendly discussion. Most of the questions the mayor fielded allowed him to tout his affordable-housing plan.

“The people demand affordable housing. It is now required in this city, and that is going to change things for the long run,” de Blasio said. “You have the full weight of City Hall behind you.”

About 250 people attended the town hall, held at an upper Manhattan high school gymnasium, and greeted de Blasio with a standing ovation. The participants were invited by about 20 civic groups close to the mayor, and many of them spoke only Spanish and relied on interpreters provided by de Blasio’s administration.

One woman complained about a harassing landlord. Another said a city housing employee was rude to her. And another suggested de Blasio’s affordable-housing plan, which allows some market rate housing, would flood her neighborhood with wealthier new arrivals and push out longtime residents.

De Blasio, who took office in January 2014, has made affordable housing the central focus of his administration’s year and has outlined the ambitious goal of creating or preserving 200,000 units of affordable housing within the decade. He has repeatedly pointed to skyrocketing housing costs as the biggest drain on New Yorkers’ finances and has vowed to make housing more affordable as part of his fight against income inequality.

Despite his inexperience in the town hall setting, he seemed comfortable. His sleeves rolled up, he nodded intently as the attendees asked their questions, frequently touted a newly passed rent freeze for rent-stabilized apartments and often called on his army of commissioners to go into detail with their answers.

Though the attendees, most of whom hailed from working-class Washington Heights, were not prohibited from asking about topics beyond tenants’ issues, the night was steered to a discussion on housing.

Town halls are a mayoral tradition that de Blasio had previously eschewed.

Former Mayor Rudolph Giuliani held one monthly. His successor, Michael Bloomberg, would hold a few a year. Ed Koch, who was mayor from the late 1970s through the 1980s, thrived in the free-wheeling setting and held more than 15 annually.

De Blasio’s critics said his avoidance of the format indicated he was out of touch with the day-to-day problems of everyday New Yorkers. City Hall rebutted that argument, saying the mayor would interact with voters while riding on the subway or while at the gym.

But the team has recently increased the number of public interactions with constituents, trying to take advantage of the mayor’s strong retail political skills. And the town hall also comes at a time when de Blasio’s staff has changed strategy in dealing with the press, with whom the mayor has had a topsy-turvy relationship.

City Hall aides have cut back on his press conferences, fearing he can, at times, come off as longwinded and stiff behind the podium. Aides also have in recent weeks significantly limited the number of occasions for the City Hall press corps to ask the mayor questions.

Instead, they are opting for more one-on-one interviews, particularly on radio, settings in which de Blasio feels more comfortable. The mayor also has recently begun taking questions from callers during those radio appearances and recently did a Twitter chat, adding a venue in which to communicate directly with constituents.