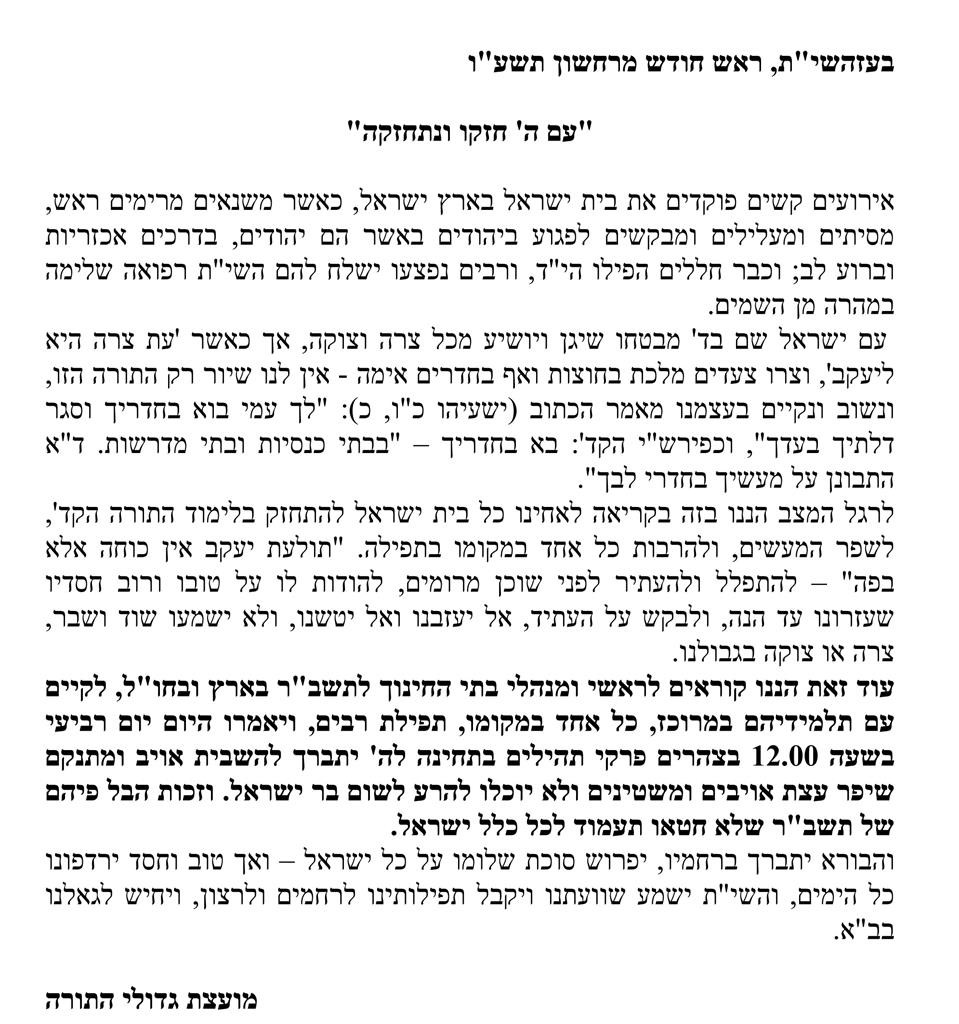 In the worst day yet of a two-week rampage of terror, three Israelis were killed and more than 20 wounded in five separate gun and knife attacks in Yerushalayim and Ranaana on Tuesday.

The killings came one right after another in Yerushalayim on Tuesday morning, in separate attacks in East Talpiot, also known as Armon HaNetziv, and in Geula.

In the first attack, two men who boarded an Egged bus in Armon HaNetziv suddenly went on a shooting and stabbing spree as the bus was moving, killing two passengers and wounding 10 others.

Haim Habib, 78, Hy”d, was later named as one of the victims. Ybl”c, his wife, Shoshana, was evacuated to Shaare Zedek Medical Center in serious condition.

Another victim, a man in his 40s who died of his wounds soon after, had not yet been identified for the media as of this writing.

The two terrorists — Baha Aliyan, 22, and Bilal Ranem, 23, were both from Jabel Mukaber, an Arab section bordering Armon HaNetziv, which has become known in recent weeks as a hotbed of Palestinian violence.

A security guard at the scene shot and killed one of them. The second terrorist locked the bus doors to prevent police from boarding and passengers from fleeing. Policemen shot and neutralized him from outside the bus.

Eyewitnesses told of a harrowing experience. Golan Cohen-Gabai told Ynet that he used his car to block the bus when one of the terrorists attempted to hijack it with the passengers still inside.

“Then he opened the doors and wanted to come at me with a knife. I closed the windows, so he ran back and returned with a gun. … I held him here for two minutes, and then police forces arrived,” he said.

Rubi Mahatbi, 18, was lightly wounded: “I took bus 78 to the city center. The two terrorists sat there and didn’t look suspicious to me, but as soon as the bus started moving, the terrorist drew out a gun, yelled ‘Alla-u Akbar,’ and shot a person as he came in my direction. I hid near the door and tried to escape. He drew a knife and started stabbing a soldier. The second terrorist grabbed me and tried to attack me, but I hit him and was able to escape,” he said.

“That moment, you feel fear and stress and you don’t know what to do. I preferred running away rather than confronting him. I have bruises on my neck from his attempts to choke me. At that moment, all I was thinking about was I was either going to survive this or I die,” he said.

In the attack on Malchei Yisrael Street in Geula, Rabbi Yeshayahu Krishevsky Hy”d, was brutally murdered when a terrorist rammed his car into pedestrians at a bus stop.

The 59-year-old Rabbi Krishevsky was a member of the Pinsk-Karlin Chassidus, a talmid chacham who authored Pninei Yeshiyahu on the Torah. He was en route to his daily chavrusah after Shacharis when the tragedy occurred.

“All he wanted was to study Torah and perform mitzvos,” an acquaintance told Arutz Sheva. “At religious events, we always honored him with speaking because of his extensive knowledge of the Torah.”

Rabbi Krishevsky is survived by, ybl”c, one son. His levayah, attended by thousands, was held near the Pinsk-Karlin beis medrash in Yerushalayim, from where it departed to  Har Hamenuchos for his burial.

After ramming the pedestrians, the terrorist got out of his car and went on a stabbing rampage. A security guard who was nearby arrived at the scene, shot and killed him.

Magen David Adom paramedics provided treatment to eight people: One in moderate-to-serious condition with injuries to his upper body and limbs, one in moderate condition, one lightly wounded with bruises to his face, and five suffering from shock.

Moshe Shmueli, who was lightly injured, told reporters. “We can see what’s happening in the country. It’s an act from Heaven that comes to awaken the people of Israel,” he said.

“I wanted to take bus 59 and was waiting at the bus stop, when all of a sudden a vehicle appeared and rammed into the bus stop with great force,” Shmueli recounted. “I was sitting inside the bus stop while outside was an older man. … I was near the terrorist who got out of the car — a giant man with hatred — who started hitting me, and I immediately realized it wasn’t an accident but a terror attack. I left everything and ran. All of a sudden I heard gunfire and people telling me to run. I went into a house and the good people there took care of me.”

“We have to stop this entire situation,” Shmueli added. “We can’t put a policeman to protect each civilian; only the Torah can protect us.”

Hamas issued a statement praising the attacks, saying they are “a message to anyone who harms our holy places. We call to continue the intifada, which is the natural response to the world’s silence.”

Two additional stabbing attacks were carried out in the northern coastal city of Raanana on Tuesday morning.
The first was at a bus stop outside city hall. According to police reports, a 22-year-old from eastern Yerushalayim approached the bus stop and stabbed a 32-year-old man in his neck and stomach. Civilians in the area subdued the terrorist until police forces arrived on the scene.

A second stabbing attack in the city took place an hour and a half later on Yerushalayim Street. Another terrorist from east Yerushalayim pulled out a knife and began stabbing civilians in front of a cafe. One was taken to hospital in critical condition, and three others sustained minor wounds.