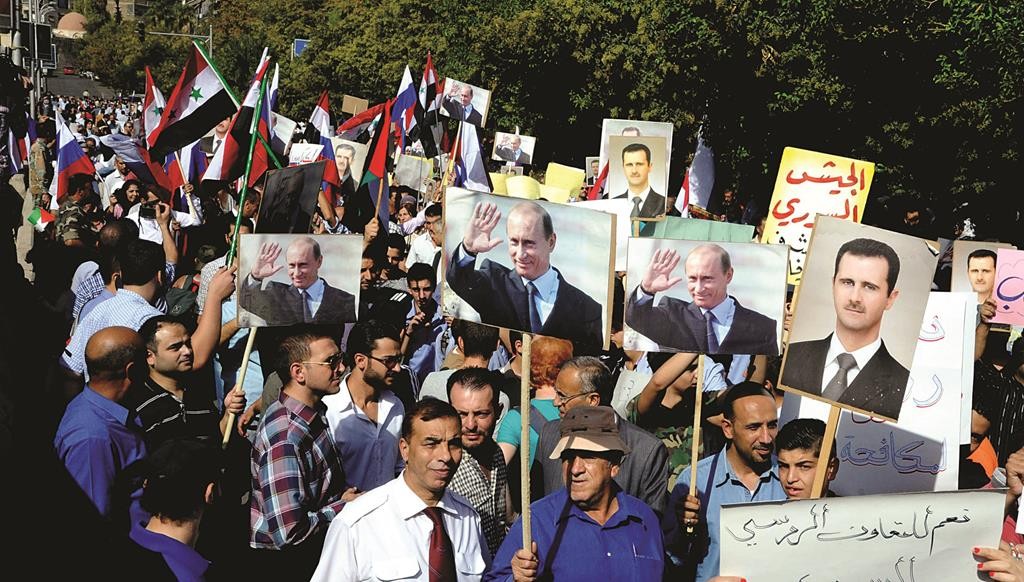 The Russian Embassy in Damascus was shelled Tuesday as pro-government demonstrators gathered outside, and Syria’s largest insurgent coalition announced an offensive to counter Moscow’s airstrikes that have injected new fury into the conflict.

Al-Qaida’s branch in Syria, meanwhile, released an audio message purportedly from its leader urging Muslims in the former Soviet Union to attack Russian civilians if Russia targets civilians in Syria.

The developments underscored the complications brought about by Russia’s military intervention in Syria, which is fueling an already brutal conflict among a multitude of radical groups.

No one was hurt in the embassy shelling, officials said, and it was not the first time the compound has been hit during the civil war. The attack came as hundreds of people were gathered outside to thank Moscow for its military intervention.

An Associated Press reporter who was outside the embassy when the first shell slammed into the compound in central Damascus saw smoke billowing from inside. As people ran away, another shell hit the area, landing about 200 yards from the compound.

It was not clear if the attack had targeted the rally.

“This is obviously a terrorist act intended probably to frighten supporters of the war against terror,” said Russian Foreign Minister Sergey Lavrov.

Insurgents have vowed to fight back after Moscow began its airstrikes in Syria on September 30. Russia has been one of the strongest supporters of Syrian President Bashar Assad since the start of the uprising in 2011.

The civil war has killed more than 250,000 people and displaced half of Syria’s prewar population of 23 million.

On Tuesday, the Army of Conquest, a coalition that includes several powerful rebel factions as well as the al-Qaida-affiliated Nusra Front, announced its counteroffensive against government forces.

“We call upon all holy warriors who are besieged in Hama to ignite all the fronts and then merge with Muslims who are approaching,” a statement said.

Before the shelling, the demonstrators had gathered outside the embassy carrying posters showing Assad and Russian President Vladimir Putin, and waving the flags of both countries.

Some held placards that read: “Thanks, Russia” and “Syria and Russia are together to fight terrorism.”

“All the West stood against us. Only Russia backed us. … We are all here to thank Russia and President Putin,” said Osama Salal, an 18-year-old student.

The Russian airstrikes have been a source of hope for Assad’s supporters, many of whom had lost faith in his ability to regain momentum in the civil war after losing huge parts of the country in recent years.

The Russian airstrikes have allowed Syrian government forces to launch a multipronged ground assault. Moscow insists it is mainly targeting the Islamic State group and other “terrorists,” but the ground-and-air offensive is being waged in areas controlled by U.S.-backed rebels and other insurgents, including the Nusra Front.

Backed by concentrated Russian airstrikes, Syria’s ground offensive continued for a seventh day in central and northwestern regions, killing dozens of insurgents, according to Syrian state media. Troops captured the villages of Lahaya and Mansoura in the central province of Hama, the SANA news agency reported.

Russia’s Defense Ministry said its warplanes have intensified their attacks, carrying out 88 sorties targeting 86 sites in Raqqa, Hama, Idlib, Latakia and Aleppo provinces – a marked rise from the number reported in previous days.

It said IS units lost most of their ammunition and heavy weapons as a result of the airstrikes – a claim that was not independently confirmed.

A spokesman for the Islamic State group, Abu Muhammad al-Adnani, vowed in an audio message that Russia, like the U.S., will be defeated. In the recording, he described U.S. President Barack Obama as “an idiot” and a failure. He also disparaged Saudi Arabia and its influential clerics for failing to rally behind the rebels that the monarchy supports in Syria like they did decades ago in Afghanistan.

But al-Adnani also acknowledged the death of a senior IS official, Fadhil Ahmad al-Hayali, who was killed in an August airstrike by the U.S. in Iraq. U.S. officials said he was the No. 2 leader of the group.

Also Tuesday, the Nusra Front released an audio message purportedly from its leader, describing Russia’s intervention as a new “Crusader campaign” aiming to save Assad’s rule.

He also called on Muslims in the former Soviet Union to attack Russian civilians if Moscow’s campaign targets civilians in Syria.

“The Russian intervention came to declare a new eastern Crusader war after the western Crusader war failed in Syria,” al-Golani said in an apparent reference to airstrikes by the U.S.-led coalition that began last year.

His death was the second Iranian casualty in Syria in less than a week. Gen. Hossein Hamedani, a senior Revolutionary Guard commander, was killed Thursday near Aleppo.

Iran, another Assad ally, has sent military advisers to aid his forces but denies sending combat troops to Syria.